After little progress for some months I decided to do more on the mountain on the Ostdorf side of my layout. I have given up with the idea of buying HO scale road material for the road as those made by Noch are simply way off scale (way to small) and I think the Faller ones are not flexible enough for the hairpin turn. I decided to simply paint the road. In fact last time I was in Home Depot I found a gallon of gray paint on their paint mistakes cart so I picked it up for $5

In July I ensured that the backdrop behind the mountain was in place.

I started by laying out the road that will connect Ostdorf with the outside world by road. It goes up a ramp to the corner mountain, through a hairpin and around out of sight behind the mountain. The road was cut from a single sheet of plywood.. 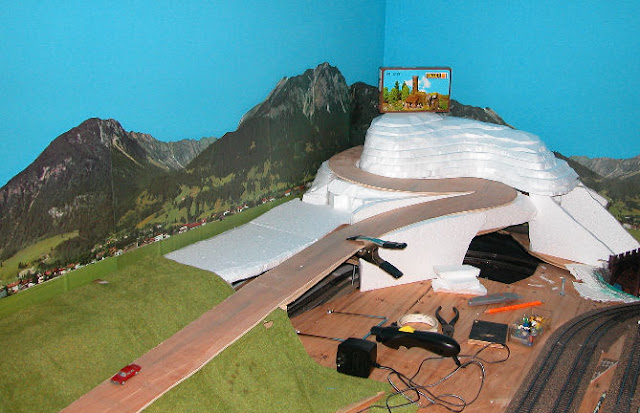 The grass cloth is just a mock up to get the visual effect of the bank. 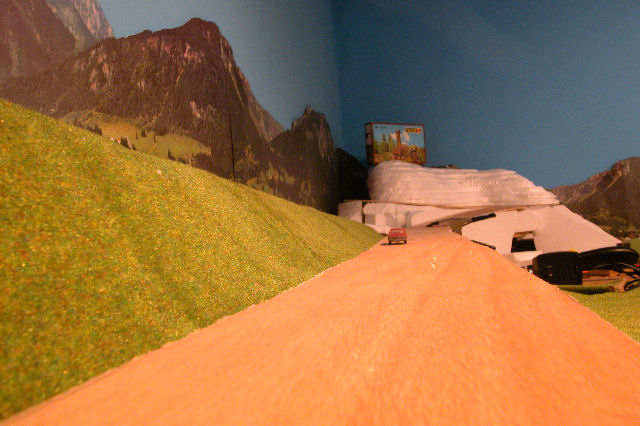 The plywood base is the road foundation and is 10cm wide. The actual road surface will not be as wide. 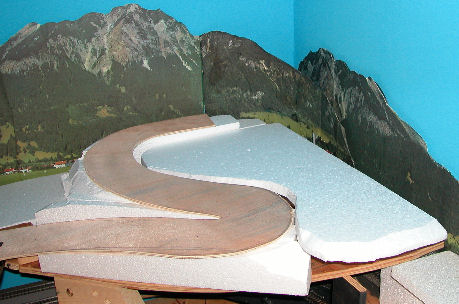 At the top of the mountain there will of course be the obligatory caste ruin - Faller kit B-291.   I sculpted some Styrofoam to form a decent base of the right size such that it also looks as though there were more foundations than the model has... (See view from ruin) 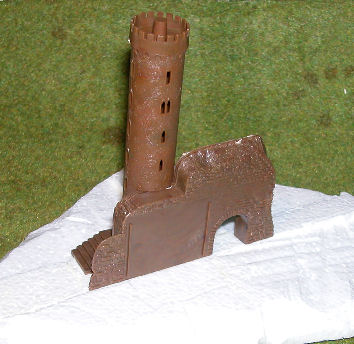 I glued all the Styrofoam down and since the next steps were going to include plaster, glue and paint in large quantities, I masked off all the backdrops and track with plastic sheeting.

The next step was to form the slopes that join the road to the hidden tunnel at the back. I used metal mosquito screen. This cuts easily and forms very nice curves as the mesh allows the warp and weave of the fabric to rotate as needed to form 3D shapes. A serious disadvantage is that the cut edges leave razor sharp metal edges and I cut my fingers numerous times on the edge. Trimming the mesh also leaves hundreds of sharp metal slivers that have a tendency to embed themselves in flesh.

I glued the edge of the mesh to the Styrofoam and used a staple gun to staple it to the plywood road foundation. In the next picture you can see thumb tacks holding the mesh in place while the glue dries. 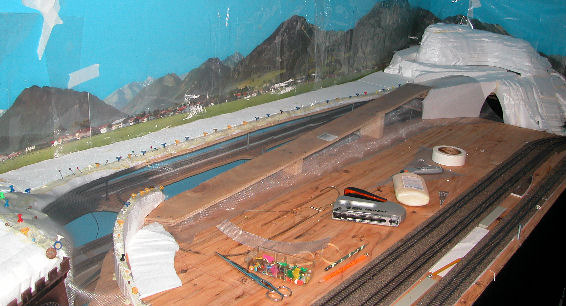 I used wood glue and though it glued the mesh to the foam perfectly, it turned out to be a big mistake as you will see later... 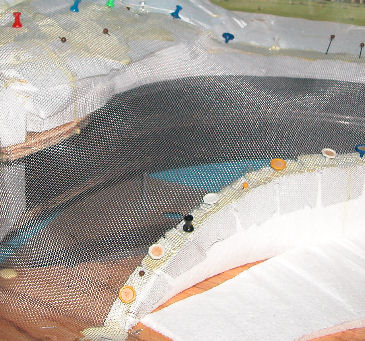 Next came the plaster. I use the drywall 'mud' that one can buy cheaply at building supply stores. I also threw in a bit of green paint so that the result would not chip to a white color.. looks more like mint frosting... 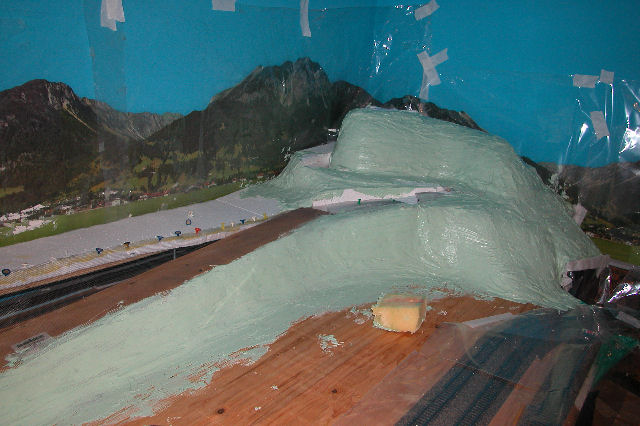 It all looked fine until the next day.. I found that the wetness of the plaster dissolved the wood glue and so the mesh was coming away from the Styrofoam... so I had to rip up the mesh that was attached to Styrofoam.. 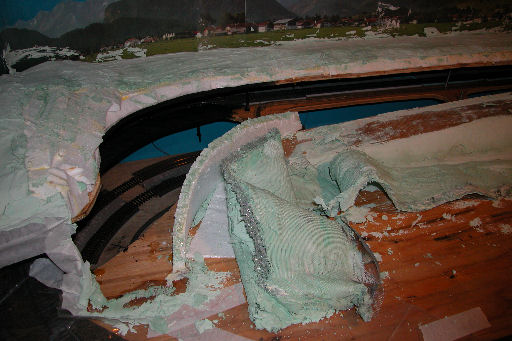 I replaced the mesh and this time I used a mesh made from some sort of plastic or nylon. No more bleeding but it does resist being shaped outside of 2D shapes. 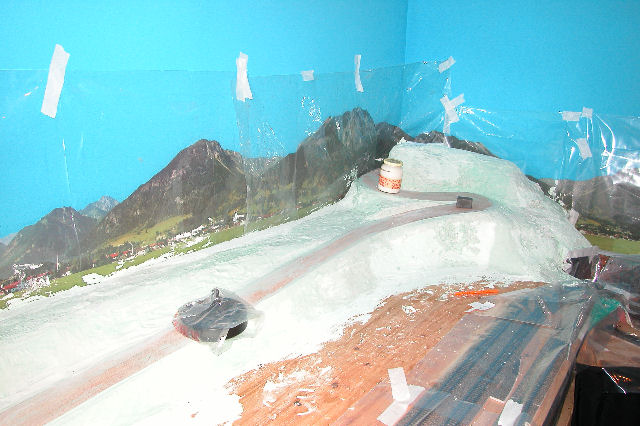 Note that despite the green paint in the plaster it dries to white anyway.. so much for that.

I roughed up the plaster in the steep parts that would become cliffs and once dry I painted the cliffs and started adding my sawdust grass cover.. 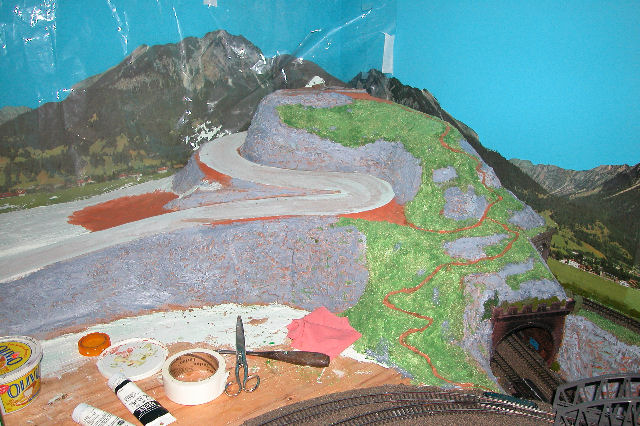 Where the new mountain joins on to the rest of the layout, I added some bushes... 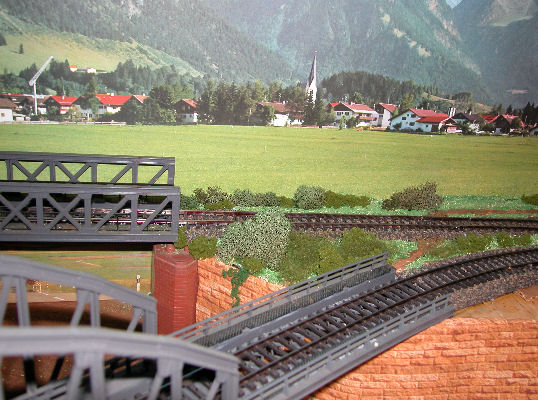 I decided to paint the plaster green before putting the grass on the rest so that if I left any spots they would not be white.. It is a  hideous green but not to worry this will all be covered with grass. 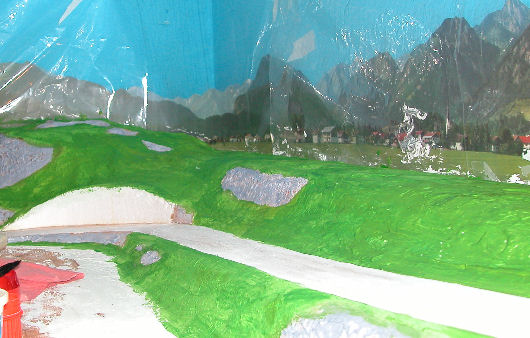 I painted the road with my cheap latex paint - it is rather dark... I assume it has just been resurfaced. If it does not look better when dry I may make it a bit lighter.. 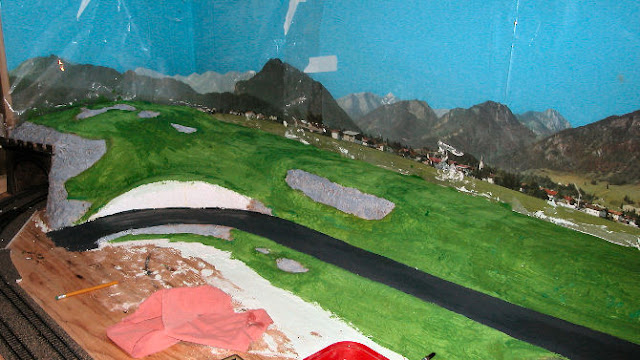