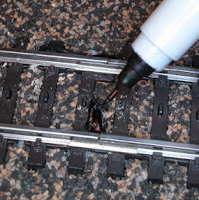 I have just a little bit of track left to wire up so I decided I had better document how I do it before I have nothing left to photograph...

I lay the track on the layout to determine exact placement, lengths, and fit.

I mark the places on the track where I need s88 detection points with permanent marker. If possible, I try to select s88 contact points that straddle a join between track pieces as there is already a rail joiner present onto which the wire can be soldered. Remember however, that the rails on either side of isolated sections have to be grounded too, but this can often be done at the other ends of the two pieces in question.

I then lift up track in lengths of about 1 to 2 meters - chunks that seem to form a unit - such as a siding, and take it to my workbench.

I cut the track in order to isolate the running rail. Cuts are made with a Dremel cutter and diamond disk.
To make cleaner cuts I made a jig to hold my Dremel... 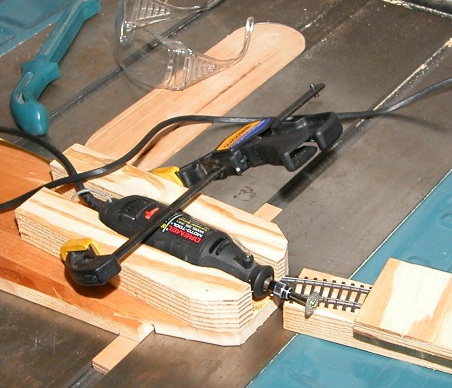 The whole jig can slide in one of the grooves on my table saw. The piece of wood under the track is sized so that the cutting wheel will clear the sleepers (ties) and only cut the rail. I have another piece of wood that is a bit thicker so the wheel cuts through a bit of the wood, and I use that piece when cutting rail that has been pulled out of the K-track roadbed.
I try to cut across the rail at an angle to reduce the absolute gap size as a wheel passes over the cut. Once I have cut one running rail of a flex track length, I can slide the rail out of the ties for subsequent cuts. This removes any chance of melting the plastic ties during the cutting of the rail, and allows for better filing of the rail ends. 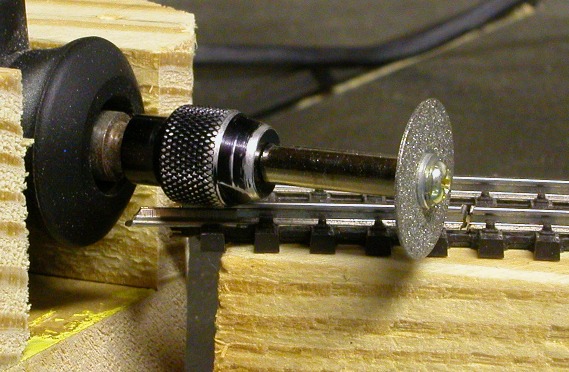 After each cut, I file and clean up the cut ends to remove all burrs and bits of metal that could electrically bridge the gap or hinder wheel movement.

If additional solder points are needed for soldering wires onto the rail (E.g. for s88 or additional grounding between s88 points) I remove some of the plastic below the rail in order to make room for a rail joiner. I then place a rail joiner in the small depression and slide the cut and filed rail back into the ties and through the rail joiner.

I crimp the rail joiner onto the rail to make a good electrical contact. I do this by crimping it with a pair of end cutting pliers.

I turn the track over and clean all the center rail tongues with a screwdriver so that there is bare metal. 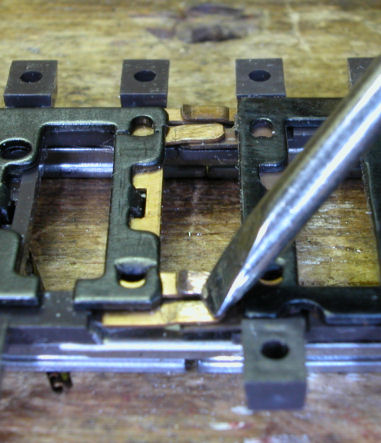 I solder blobs of solder onto the adjacent tongues and then bridge the solder across the tabs also, this effectively solders the rails together and produces a very strong rail joint as well as guaranteeing good electrical conduction from rail to rail. 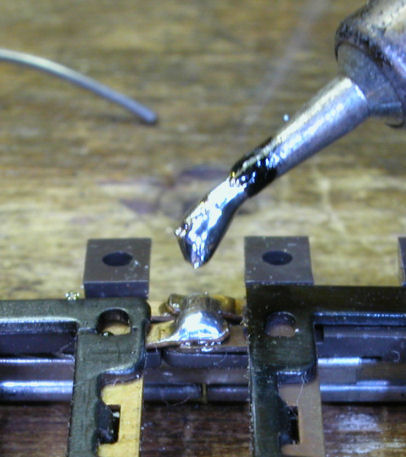 I solder on a red current feed wire about 60 or 70cm long onto the solder that joins the underside of the rails. 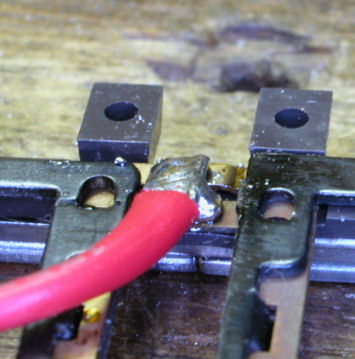 I then thread the red wires up between the ties so that the track can be placed flat, the right way up on the workbench again.

I scratch the rail joiners that need to have wires soldered with a small screwdriver to expose bare metal and then tin them with some solder. I then solder color coded wires to all the rail joiners as needed, blue or gray for s88 connections, brown or black for ground.

Test the track for shorts using a circuit tester. Check also that isolated sections for s88 points are actually isolated.

Take the assembled length of track back to the layout and push it into the Merkur ballast and connect it to any existing track.

Next to each wire, I drill a small hole through the ballast and base board and thread each wire through. 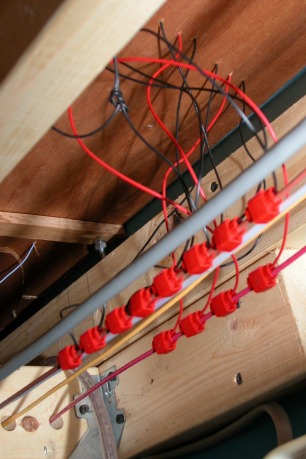 Use a black permanent marker to blacken the bit of wire that may be visible from above. I also blacken the solder joints so that they are not shiny. 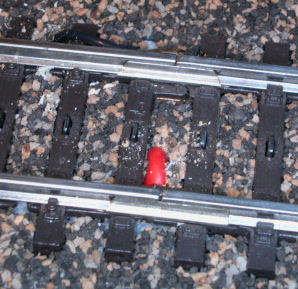 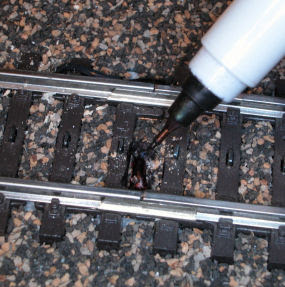 Test the track for power and s88 contact operation.

Into each gap between the running rails at s88 contacts, I insert a small piece of plastic (0.8mm thick) cut from a margarine tub lid. I then drip super glue onto the cut and plastic to glue it into the gap. When the glue is dry I cut the plastic down to the same profile as the rail with a sharp work knife.

Note the additional rail joiner used for the s88 connection to this isolated section.

I use permanent markers to add a rusty color to the sides of the running rails.

It seems like a lot of work but the effort seems to be worth it. I have not had any electrical supply or shorting problems. The cuts in the track are so unnoticeable that I have to point them out to people who ask how the computer knows the location of the trains!
Email ThisBlogThis!Share to TwitterShare to FacebookShare to Pinterest
Labels: s88, Techniques, track, wiring
Newer Post Older Post Home