The most obvious product choice for a large impressive bridge is the Faller Bietschtalbrücke kit 120535. 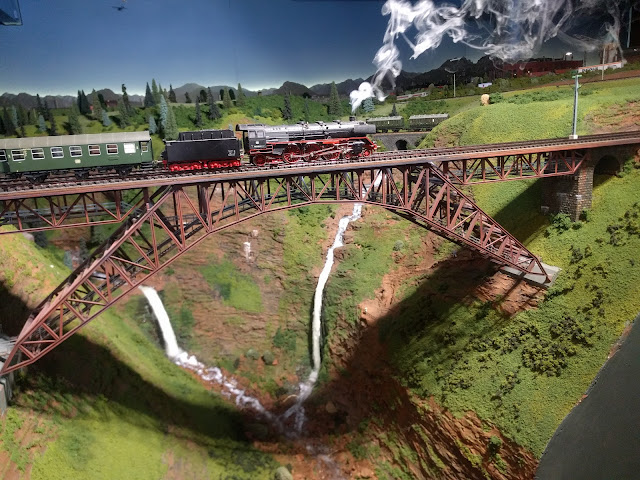 The bridge is 110cm long and 115mm wide and is modeled on the prototype in Switzerland. 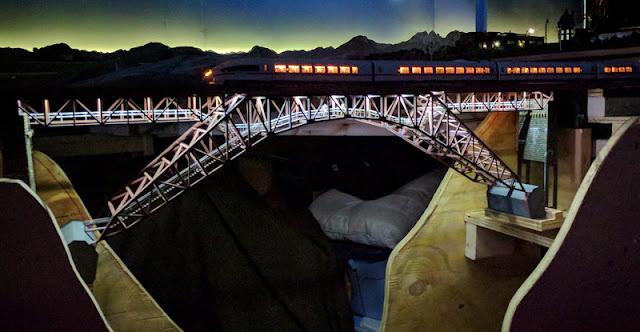 I have been building Faller kits for about 40 years and I was rather disappointed by the quality of this kit. Despite those issues I was able to make it into the impressive bridge it should be.

Here are the issues I found:

I get the feeling that the design of this kit did not come out of in-house Faller design. I am wondering if it was bought from a third party and then included in the Faller product range.

Here are photographs of the stages and approaches I took during building. 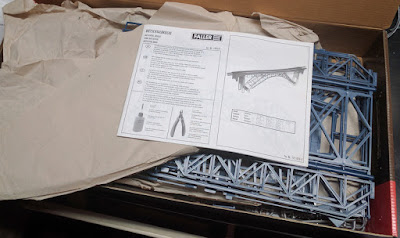 I lightly sanded off burs after removing parts from the sprues. 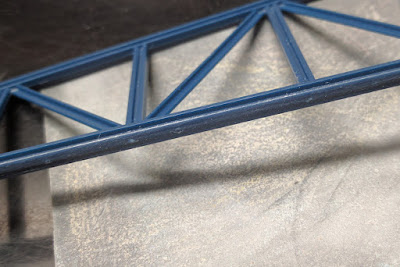 I decided that the pristine blue structure would need some weathering, but given the fact that the pieces have to be glued 'by eye' with very few positioning lugs, I decided not to risk trying to glue painted parts together wherever possible. I thus constructed the main structure before spraying it a rusty brown color before adding any walkways and railing. 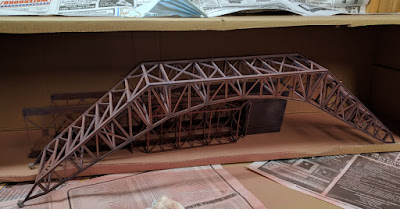 Once the stone arches were assembled I weathered the stonework. First a coat of black paint. 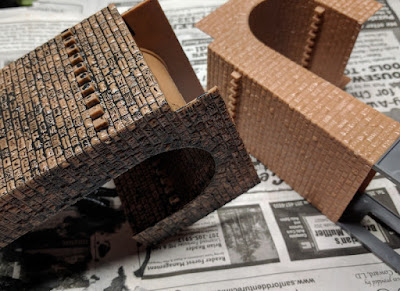 Once that was dry I added some green paint to simulate some moss and also added some calcium and rust deposits. 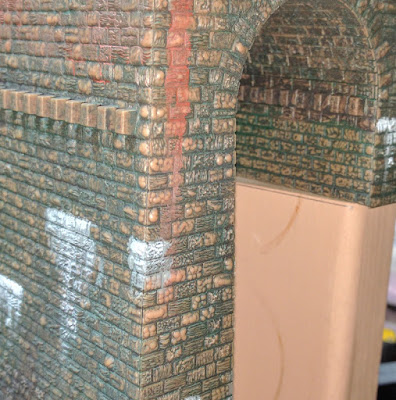 The concrete foundations got a coat of gray paint. 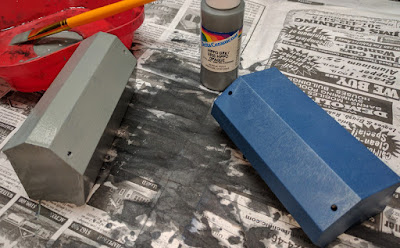 I decided that the very fragile nature of the railings on the outer edge of the bridge would result in breakage so I opted to leave the second walkway off. The interior walkways are much more protected from damage and parts not used on the outer walkway could be used to create access to the ends of the ladders at the concrete foundations.

I also painted the walkways and then added some silver paint to the steps to simulate the polish that metal gets with foot traffic. Assembly of the walkway railings need some patience and care. I glued one side at a time and held the railing in place with a small clamp. 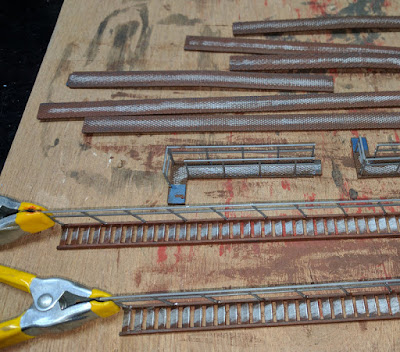 Before gluing the walkways into the superstructure, I scraped some paint off where contact would be made. 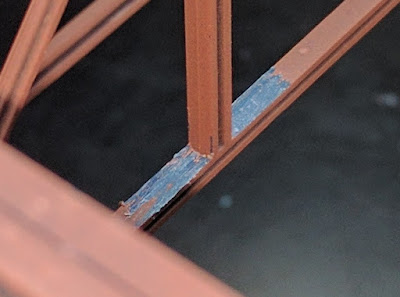 I used some of the parts meant for the exterior walkway to make access walkways to the central ladders from the concrete foundations. 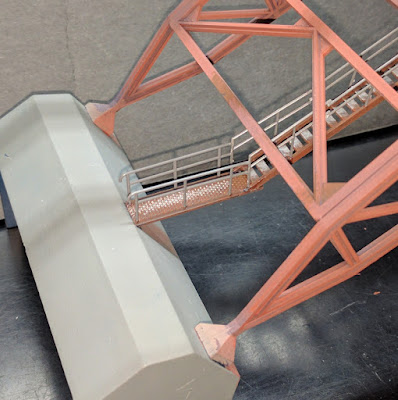 Since the walkway under the bridge is used by the public to get from the winery hotel to the swimming hole, I decided to add some lights to the bridge. I used a length of common LED strip and painted it black except for the actual LEDs 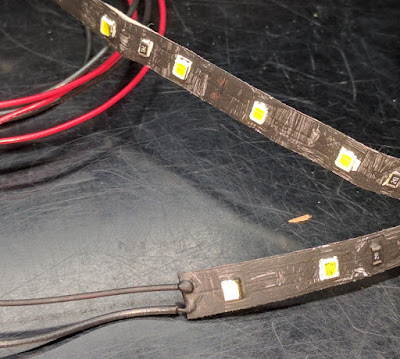 The strip of lights was laid on the top of the bridge facing down. I placed them slightly off center to avoid the large squares on the girder connections. 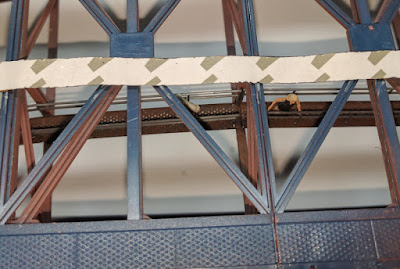 In order to provide a uniform horizontal upper surface I ordered two packs of steel tread plate made of styrene. The sheets allowed light to shine through so I added a layer of thin plywood from an old hollow door. The tread plates were cut to size and glued onto the plywood and painted. 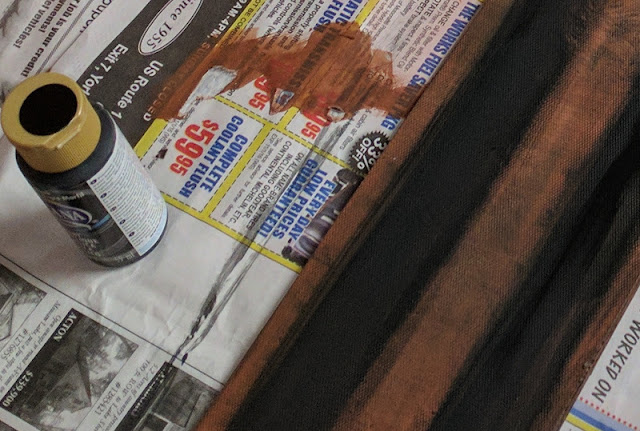 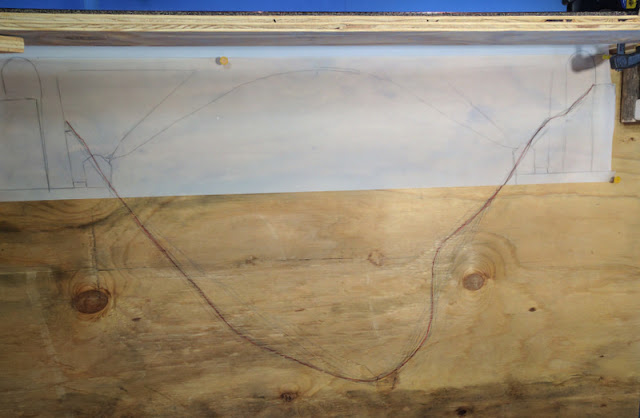 In order to mount the bridge in the layout I created a U-shaped support from plywood. 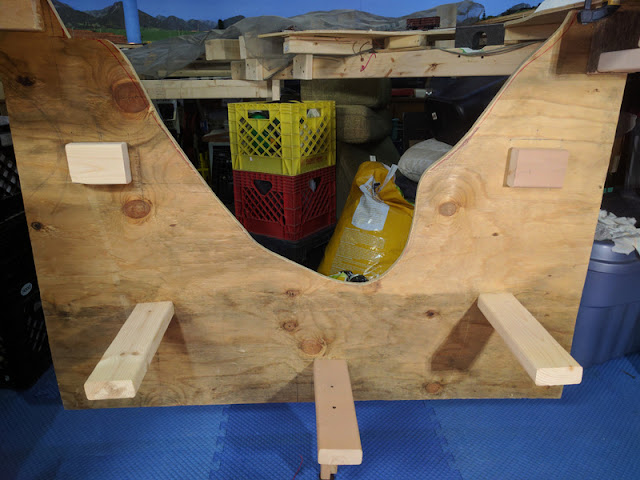 Within this support are the two bases to hold the bridge, positioned on threaded bolts so that the height of the bridge could be adjusted accurately. 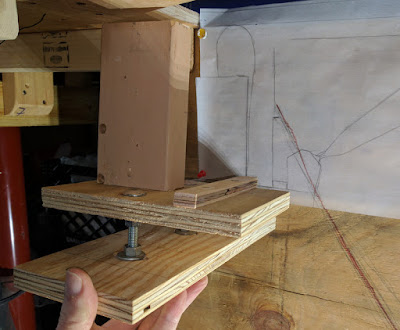 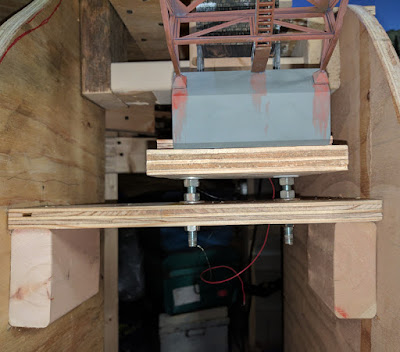 I advise against assuming that once built, this bridge will be of exact dimensions. This may be why Faller publishes very little about the exact size. Despite extreme care to build this structure with great accuracy, it is not exactly straight and square. I suggest instead that you construct adjustable bases so that its position can be adjusted.

Finally the temporary bridge holding the mainline could be removed and the bridge put in place! 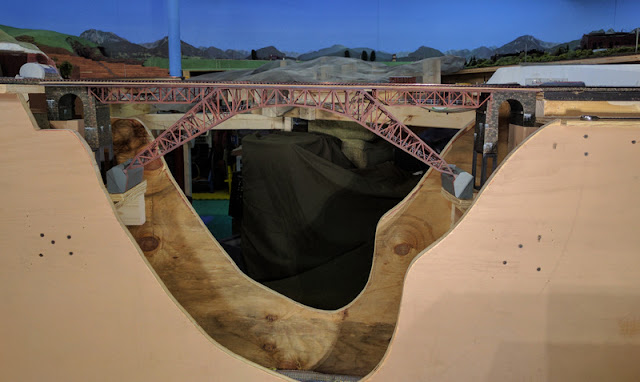 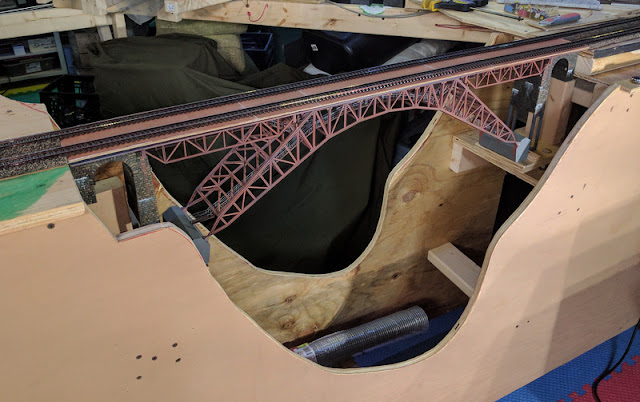 Once the holding bolts had been adjusted it was time for the first test trains! 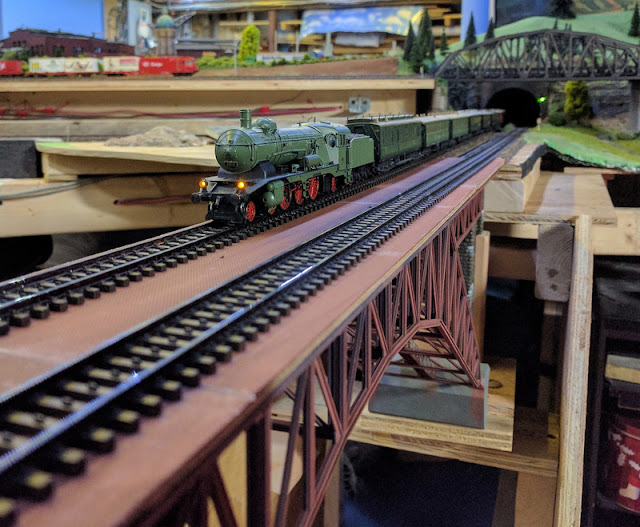 The lights were connected via a LED pulse width dimmer connected to a K84 module so I can switch the lights from the layout control software. 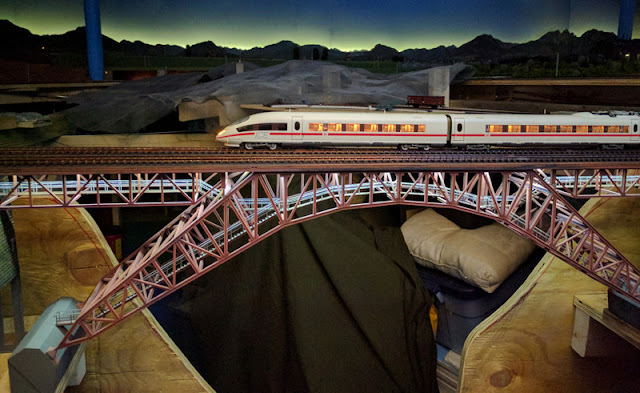 The next step will be to add the scenery surfaces under the bridge and in the adjoining areas.