Making a river with waterfalls

Having completed the valley sides, it was time to add the stream and waterfalls.

There are two streams, one small one that comes from a small spring and catchment area and then tumbles down some cascades before falling into the valley, and the main valley stream which comes from a lake.. 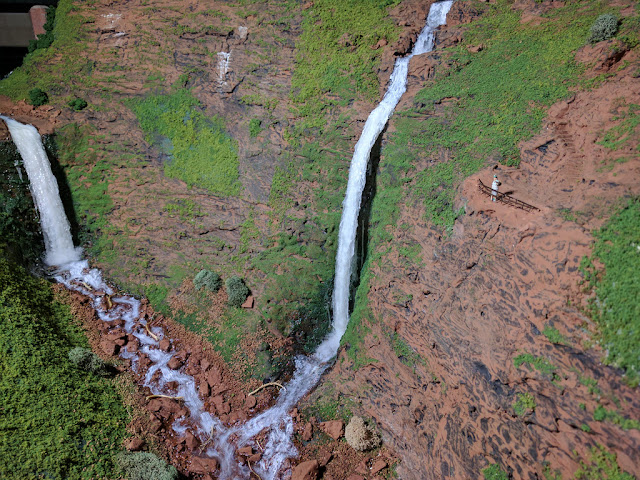 I previously painted the stream beds black. I also added fine turf behind where the waterfalls would be, to simulate the lush moss that grows in the area that is subject to the water spray from the waterfall.

The floor of any large valley is strewn with rocks and debris that falls off the side of the valley, so my first step was to make a bunch of rocks. I dried some plaster and then smashed it up into bits. 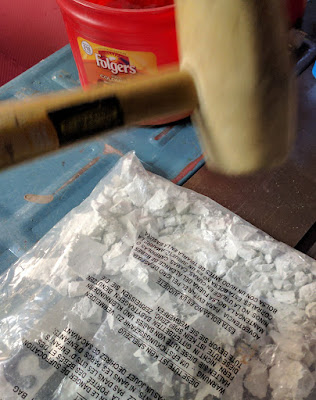 I then painted them brown as much as I could without making the fragments of plaster too wet, and I let them dry. 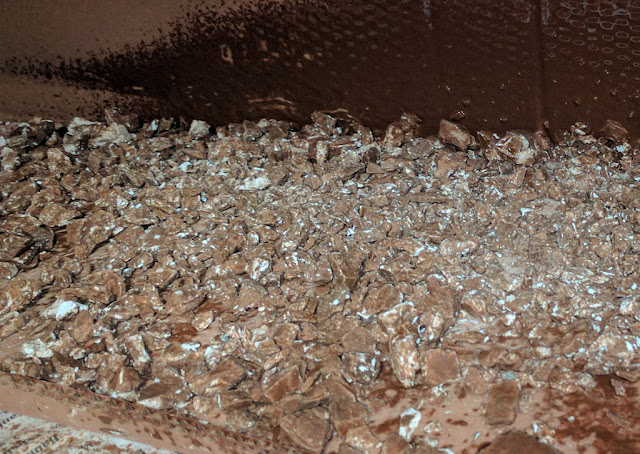 I then tossed the rocks into the valley. This makes them land up just like the real rocks would tumble into a valley. I added some coarse brown ballast material closer to the sides of the valley to simulate talus or scree material. I then poured on a diluted (60%) mixture of wood glue to hold it all in place. 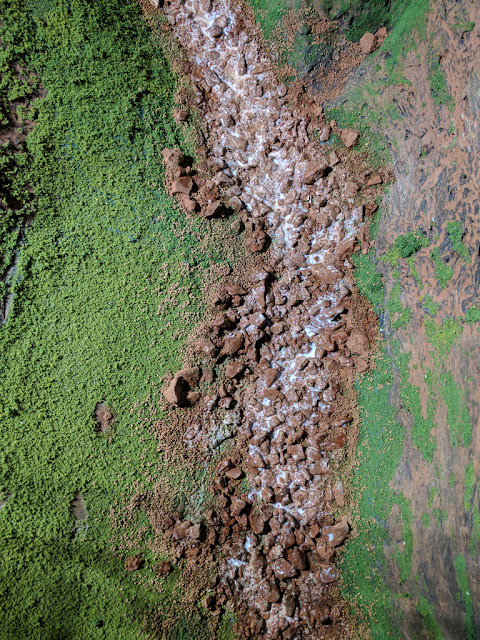 Once the glue was dry, I painted any bits of white plaster that were still visible.

I added some small sticks to look like driftwood, some such that they would be half in the water.

The next step was to add some water. For water I use a product called Envirotex-Lite - it is an epoxy that you mix together and pour where needed. For the small steep stream, I poured out very little, just enough to wet the stream bed. 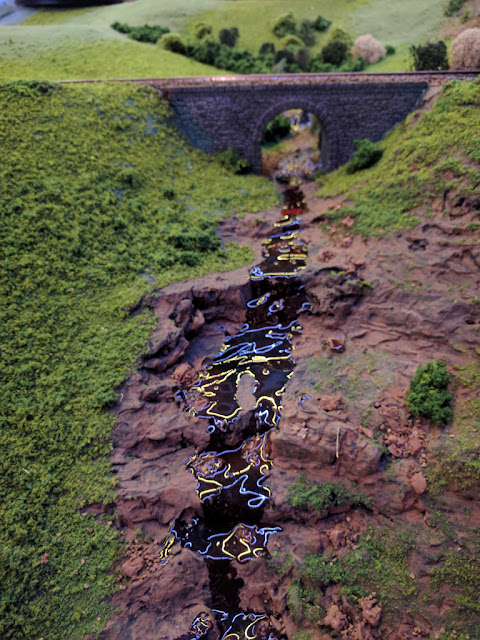 In the main river bed, I let the 'water' flow around the rocks.
I also ensured that I wet the mossy area behind where the falls would be going 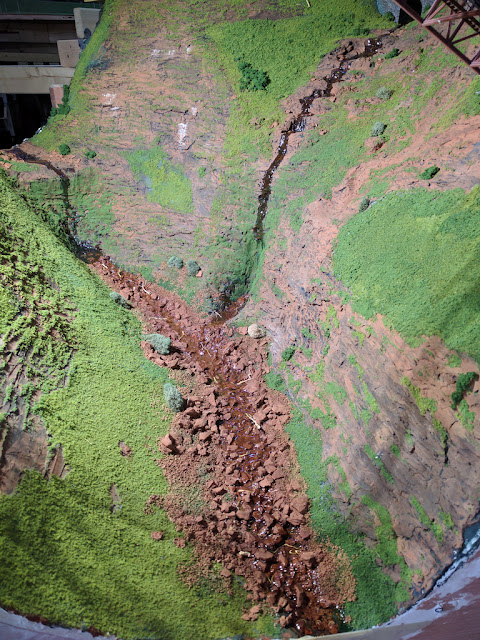 I added more 'water' to the main river bed a couple of times until I had what I thought would be an appropriate amount of water in the river. The manufacturer suggests only adding 1/8" at a time anyway. The Envirotex-Lite product does some creeping up the edges (capillary action), and in some places I dripped it on rocks. This left things looking wet where it should be dry. I simply painted over these areas with the brown paint that I had used to paint the rocks. I avoid mixing colors for rocks and cliffs etc. so that the color always matches when touching up.

The next task was to do the bits of water that were actually falling. For this I used the Woodland Scenics product called 'Water effects'. This comes in a bottle and looks like a thick white glue when dispensed, but it dries to be somewhat clear. As per their instructions, I squeezed the product out in the size of the waterfalls and also a bunch of smaller 'drips'. I made multiple strips on parchment paper. Note that the paper seems to wrinkle in one direction and not the other. I think it is best to align the strips in the same orientation as the wrinkles.

24 hours later, when dry, it pealed off the paper easily. 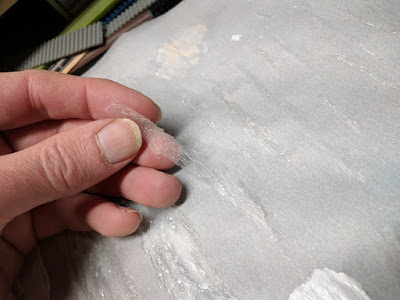 I attached the small 'drip' pieces on the cliff behind the falls. 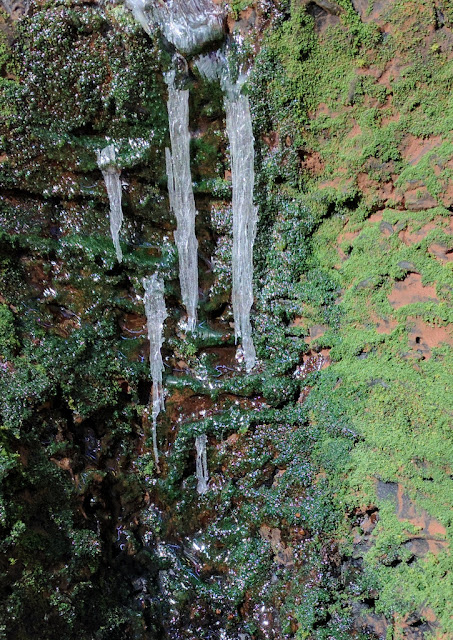 I wanted to ensure a nice parabolic curve of the falling water, so I looked around for something that would be stiff enough to support the water. I found some white cable ties and decided that they would do the trick.

I cut them to length and then sandwiched the ties between layers of falling water, using the water effects as glue. I let them dry in the desired shape. 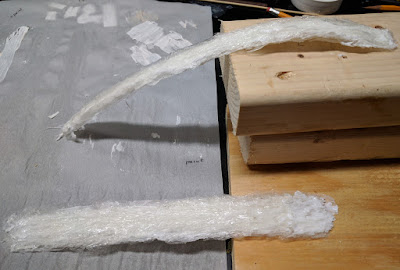 It is important to consider the amount of water flowing in the falls. I did not want to create a huge waterfall with almost no water supply.

I then glued the waterfalls in place and held them in place overnight. 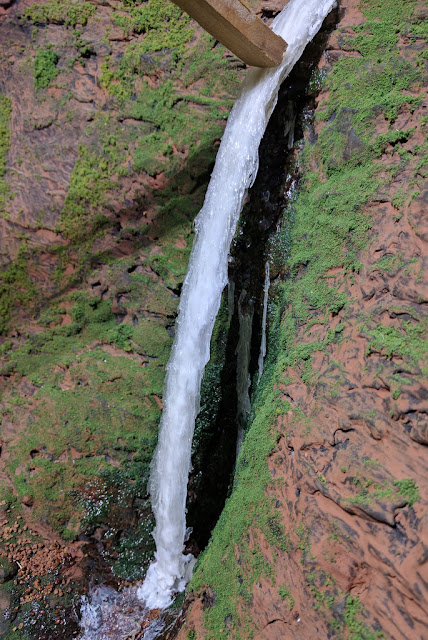 I added some Water Effects in the riverbed where the water cascaded past rocks. Here it is, still wet and white. As you can see I used a paintbrush to shape it a bit. 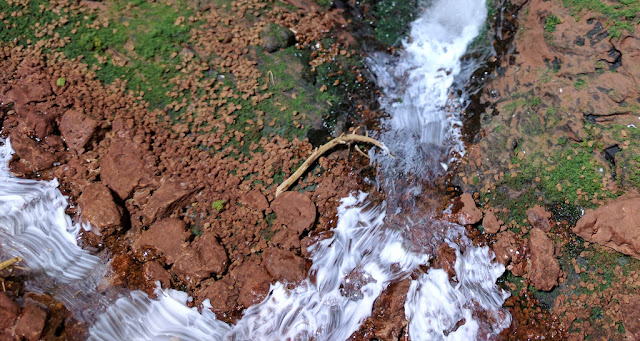 Once it was all dry (another day's wait!) I dry-brushed some white acrylic paint onto all the places where the water would be foaming. I dragged the brush where the bubbles would stream and swirl about. 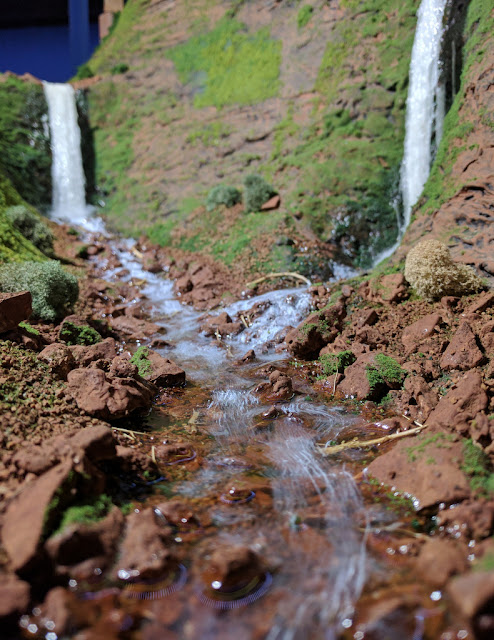 The last touch for the falls was to add some batting (used for stuffing animals etc) to the base of the falls to produce a splash and spray effect. 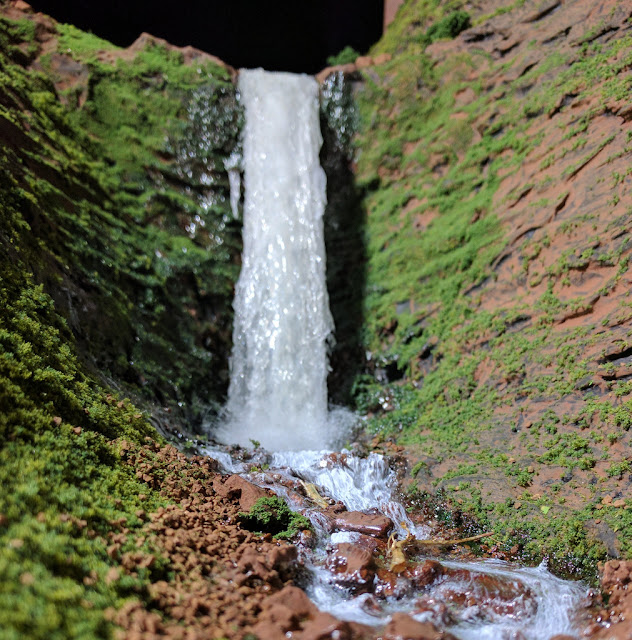 I added some moss to the rocks 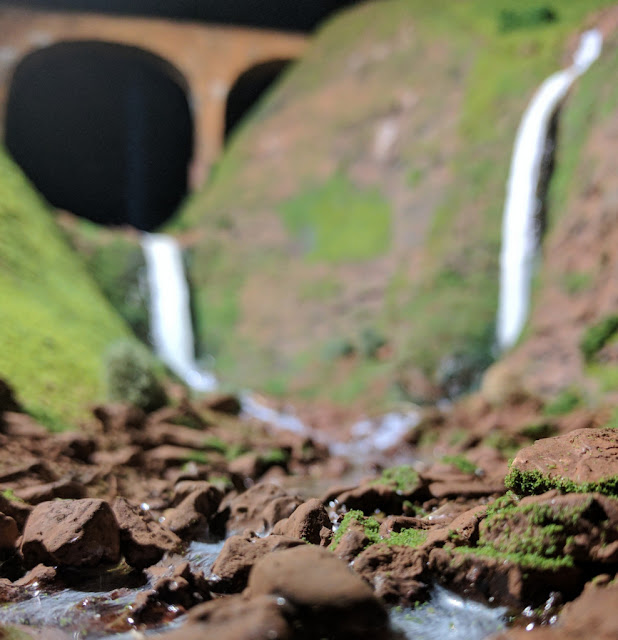 The water attracted a deer... 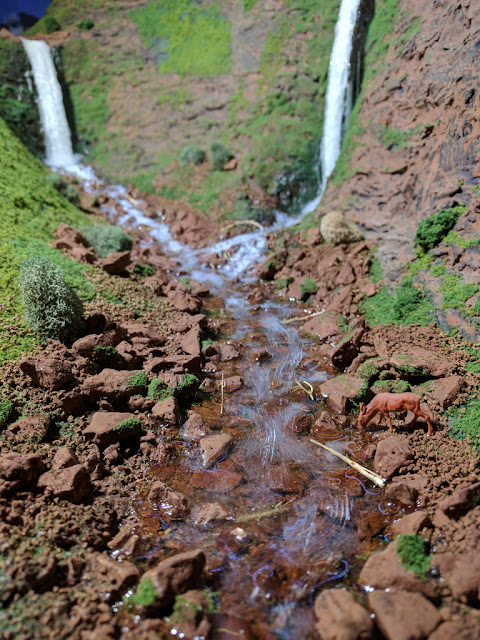 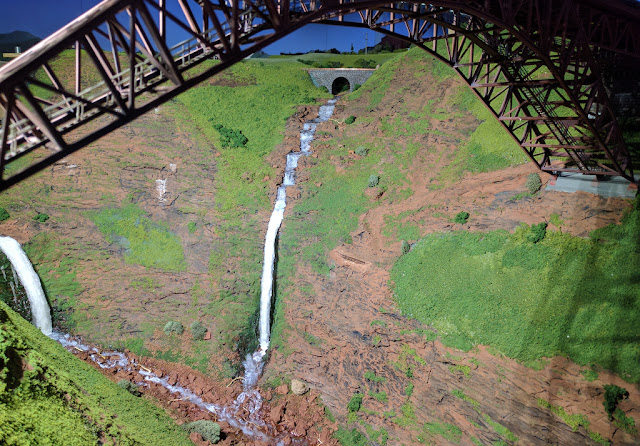