I use a lot of software to make my layout work, and some of it is available for you to use too!

I have created four main pieces of software:

Click here to learn how to obtain the software and the screens to have this on your layout too!

You can also see examples of how I installed them on my layout...
https://cabin-layout.mixmox.com/2019/05/working-platform-signs.html

RemoteSign allows you to display animated train timetables like you see in train stations and airports: 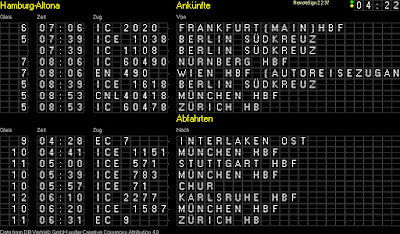 You can download RemoteSign and learn more about it at https://remotesign.mixmox.com

RemoteSign Sequencer is what you can use to control the content  of any number and combination of RemoteSign ESP and Remotesign Windows displays. It can react to sensor inputs from them and update the displays in a very flexible manner.

You can download RemoteSign Sequencer and learn more about it at https://remotesign.mixmox.com/p/remotesign-sequencer.html

Bw is the software that I use to control my train layout. I created the software, starting in 2000 and it has been under development for at least 21 years!

It is rather sophisticated and handles the following:
It runs on Windows and is written in Visual Basic 6. As of February 2018, there is about 2.7 MB of code! It calls down into Windows for text to speech and permanent storage of data.
Here is an overview of the network connectivity of how Bw connects to copies of itself on other computers (BwRemote), RemoteSign Windows, RemoteSign ESPs, Phillips Hue, RemoteSign Sequencer and browsers! Voice commands from Google Assistant can also trigger events via IFTTT. 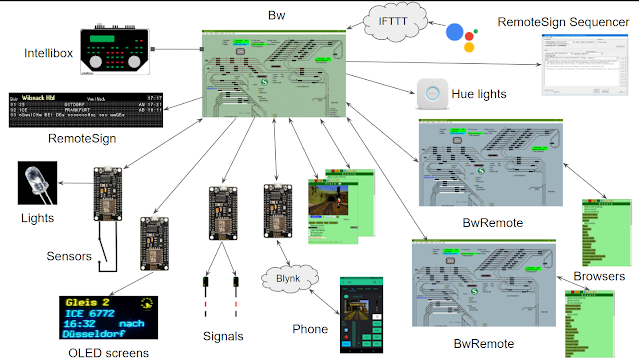 Apart from some browser pages, all data is kept synchronized with the state of the layout. Control  data flows in the direction of all the arrows. All connections from Bw to other items are via Wi-Fi except for the Intellibox connection with is over an RS232 serial port.
Many of the concepts and techniques date from when I first starting writing software for controlling Märklin digital trains in 1989. At that time, I wrote a program using Turbo Pascal that ran on an IBM PC and controlled the Märklin 6050 interface.

Sadly Uhlenbrock have dropped the P50b protocol from their second generation Intellibox and seem to have adopted LocoNet across their product range. This limits my software to talking to the original Intellibox.

Sorry, the Bw software is not freely available for others to use. I simply do not have the time to answer questions and provide support for it.