Making grape vines for a vineyard

Ten years ago I created vineyard using some Faller 18190 kits. Now that I have moved the winery onto a bigger hill, and also intend adding a terraced vineyard, I realized that I was going to need a lot of new grape vines. In fact, I was going to need about 47 meters of HO scale grape vines! Buying such a large number of vine kits was out of the question so I set about to make my own. I had to find a method that was cheap, and able to be scalable for the quantity of vines I needed to produce.

I have now completed adding additional vines to the vineyard and I am documenting the steps I used to create and plant the vines here. 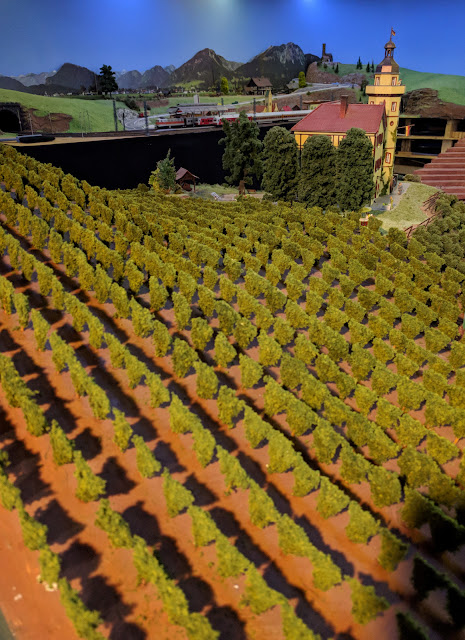 My first attempts were to see if I could simply make 'very narrow hedges' using vegetation material. I tried gluing green flocking together in an aluminum rail to which I had applied some vegetable oil. It did not  work out well. I tried painting some gauze bandages green and then adding leaves, but the process was slow and laborious. I also realized that such 'hedges' could not be applied to a curved hill. I needed individual plants.

I decided to use toothpicks as the stems of the individual plants and somehow make a flat area to represent the leaves of the vine. I bought 1000 toothpicks on amazon for $13

In digging about for lacy fabric in my wife's sewing kit I came across some tulle. It is a very fine gauze-like mesh and I decided this would make a good base on which to apply the vegetation after it had been painted green. The roll of tulle we had was not enough for a strip of material a couple of cm high and 4700cm long, so I needed to buy a new roll. I looked to see if it was obtainable already green, and low and behold, it is available in green, and is relatively cheap. A roll of green tulle, 6" wide and 100 yards long was available for $5.99

I then had the materials and had to design a way to put them together. I decided to make a triangular piece of tulle to be glued onto each toothpick. I needed to cut the roll of tulle down to make a roll of it just about 2cm wide. While it was still in its original roll, I used a long bladed knife to cut off the end of the roll. 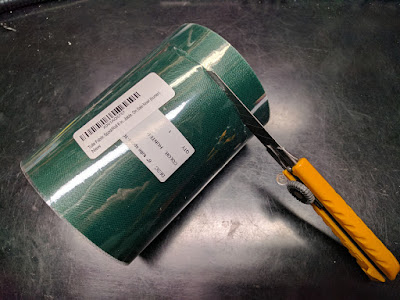 It cut through OK but was a little bit uneven. 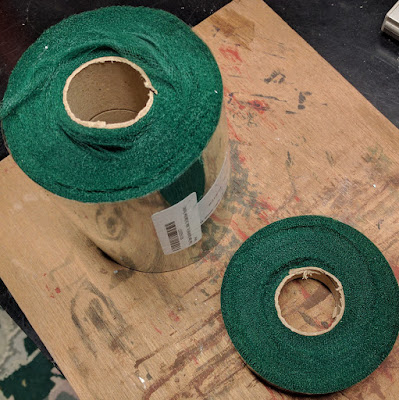 I then had a narrow roll of tulle that was in danger of getting all tangled up so I sandwiched it between two yoghurt lids so that I could draw it out of a hole in one of the lids. 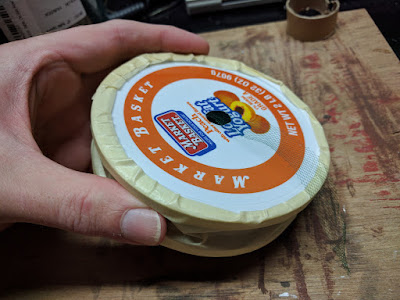 The toothpicks needed to be a darker brown, so I got them all into a plastic tub and in poured in some diluted brown paint. 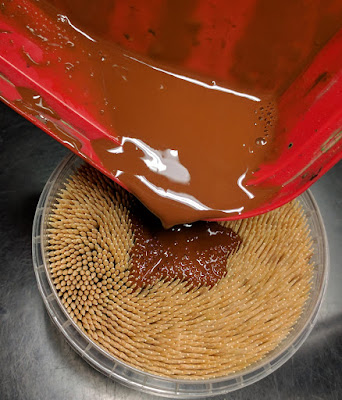 And then I spread them out to dry on some newspaper. 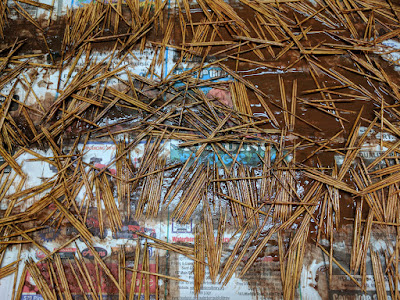 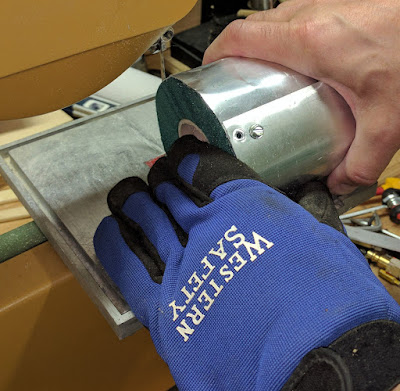 Now that production could start, I covered the work bench with baking parchment paper , then cut the tulle at alternating angles like this: 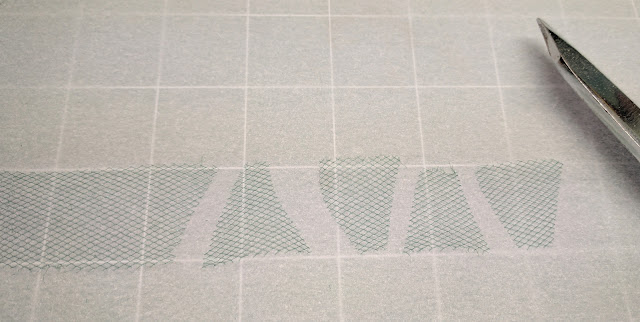 Onto each piece, I placed a toothpick that has been dipped in white school glue. 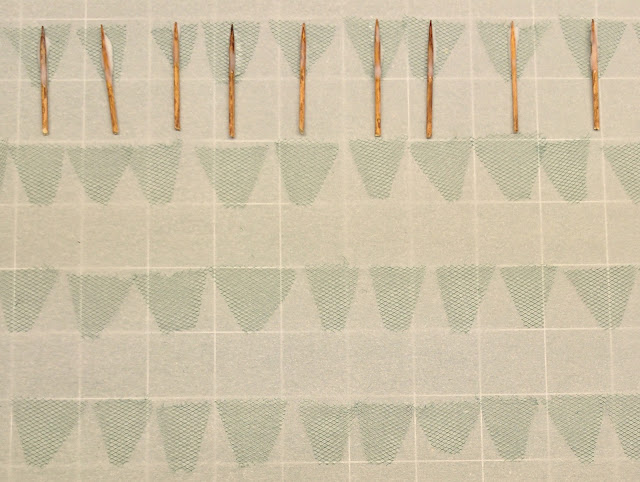 (Initially, I cut the toothpicks in half but I soon gave up on that as it was not worth the effort.)

Once those were dry, I painted glue onto the tulle and covered it with a 50%-50% mixture of Dark Green and Light Green Woodland Scenics Coarse Turf and let it dry. Once dry, I flipped each vine over and painted the second side with glue and added the fine turf mixture to the second side. 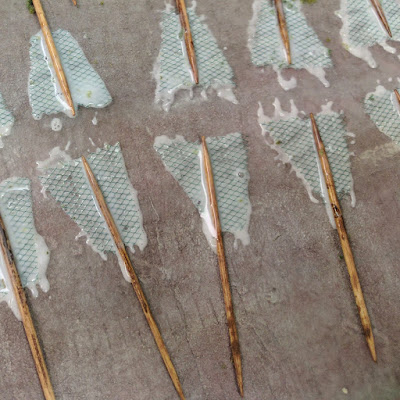 However, when the glue dried I found it had stuck to the wax paper way more so than the parchment paper and they were tricky to peel off the paper. 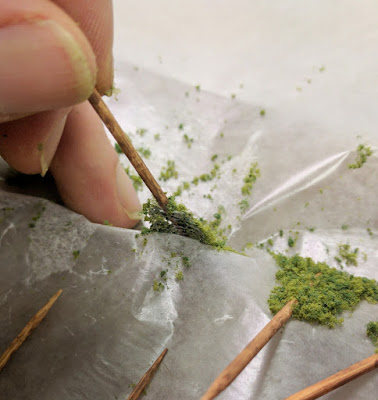 I therefore went back to using parchment paper. A putty knife gets the vines off easily. 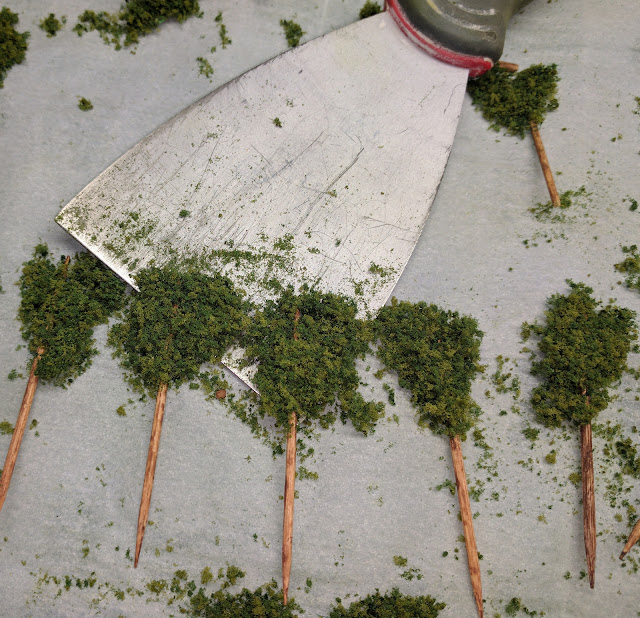 When one repeats a process many, many, times over, one starts thinking about ways to make it more efficient. I thought that having to do two passes of gluing and adding turf and waiting for each to dry was taking too long. I then decided to dip the bare vines into the glue 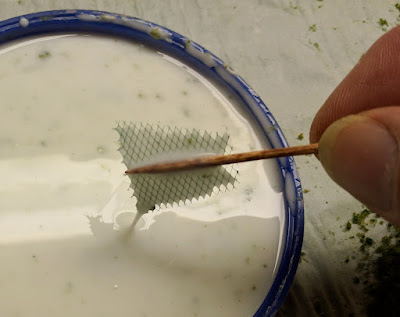 and apply turf to both sides at once. 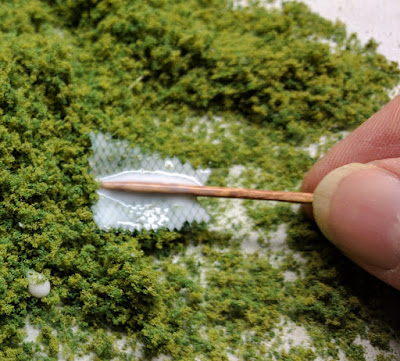 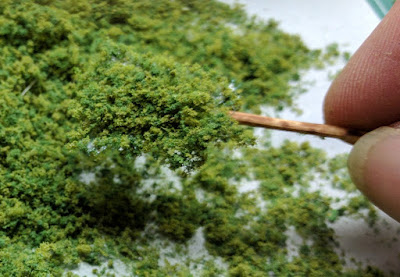 This process was indeed much more efficient and, in fact, left fewer gaps that had to be have turf applied again.

Installation on the layout was relatively fast in comparison to making the vines...

To mark out the rows I measured the offset from the previous vines and inserted a thumbtack at each end of the row. I then aligned my laser line through the center of the two pins. 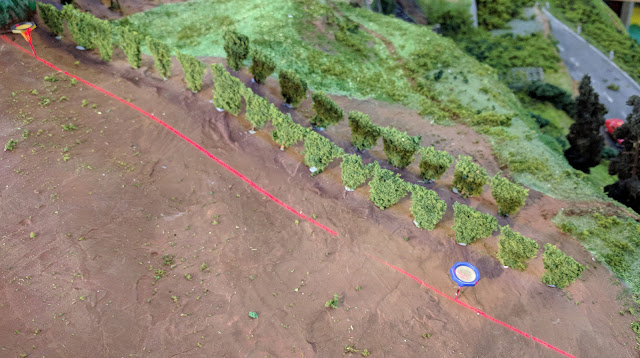 In order to get the laser line to project downwards and shine onto both sides of my hill, I clamped some wood onto the joist above to hold the laser level above head height. 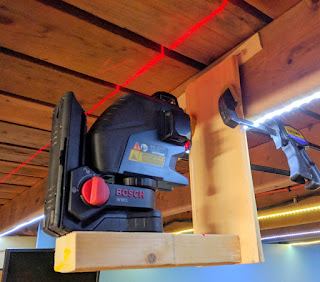 It was then fairly simple to drill a series of holes along the line with a hand drill. 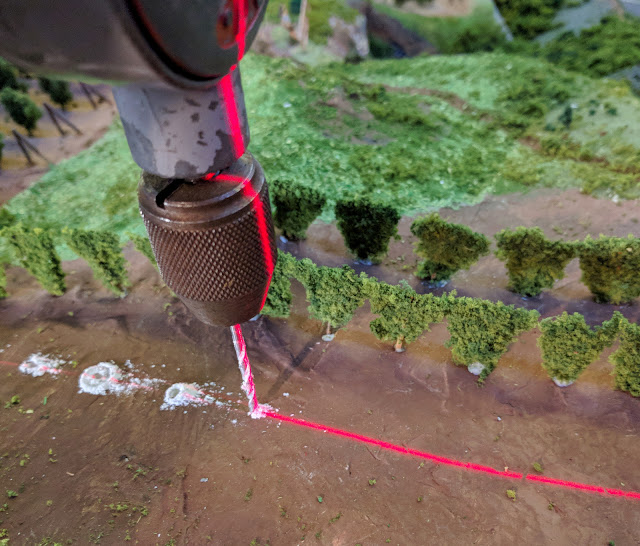 When drilling, I kept the drill perpendicular to the ground and also in the plane of the laser line.

(If you have cloth material below your landscaping, resist the temptation to use a power drill or to drill too fast, otherwise you may experience this disaster!) 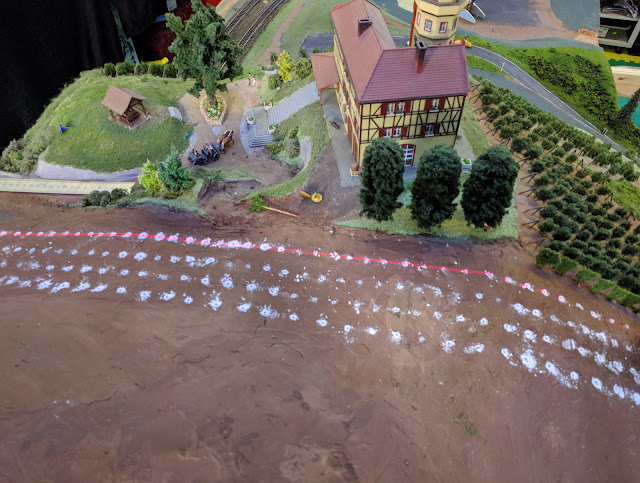 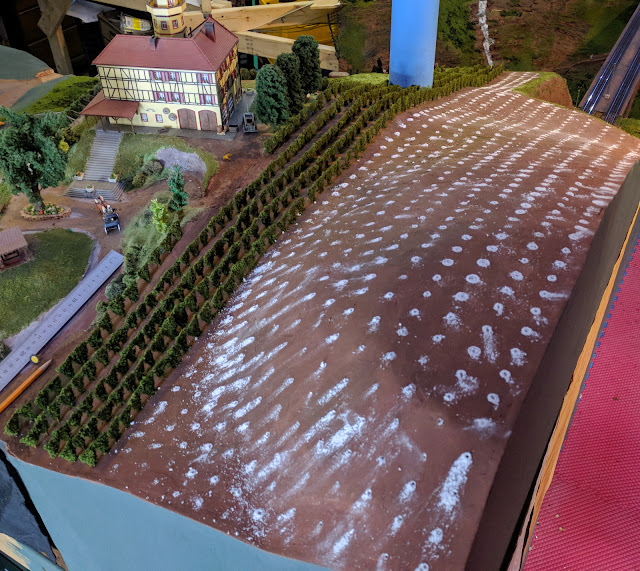 and then I vacuumed up all the dust... 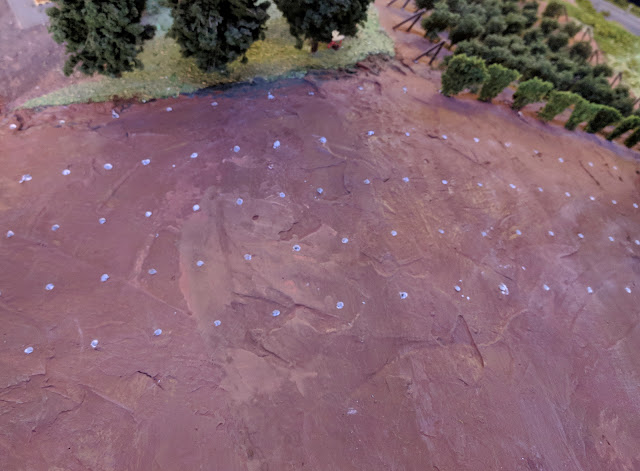 Planting each vine was very quick and very satisfying... I dipped the end of each vine into some school glue and pushed it into the next hole.... 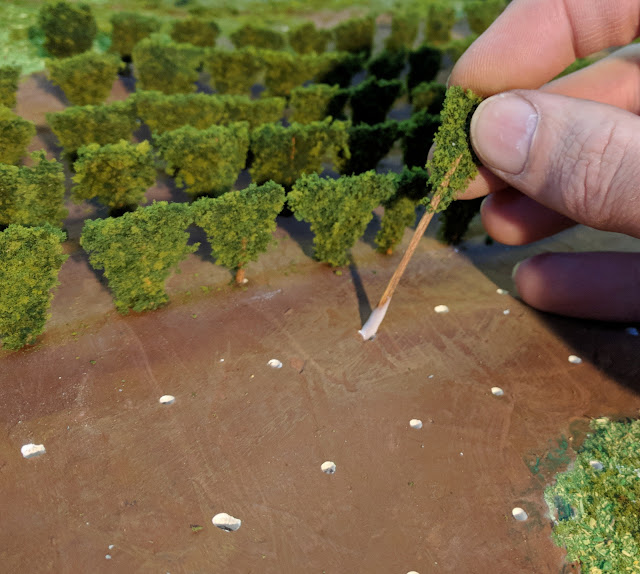 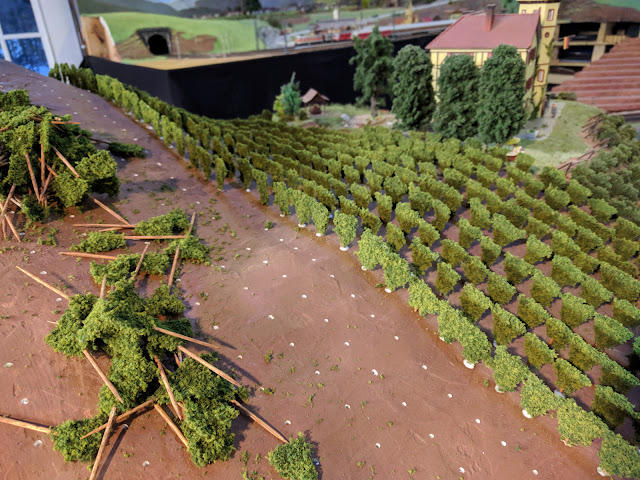 I am happy with the results 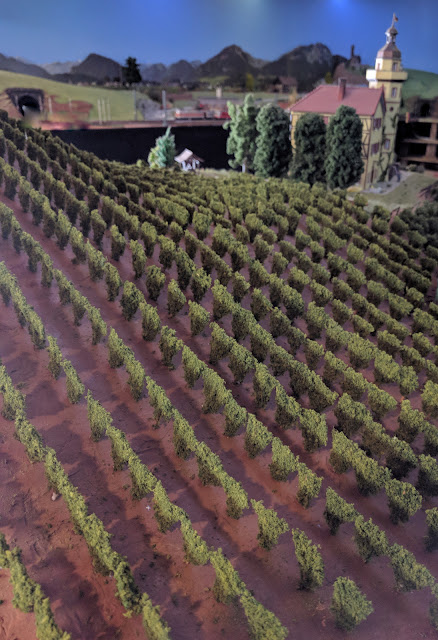 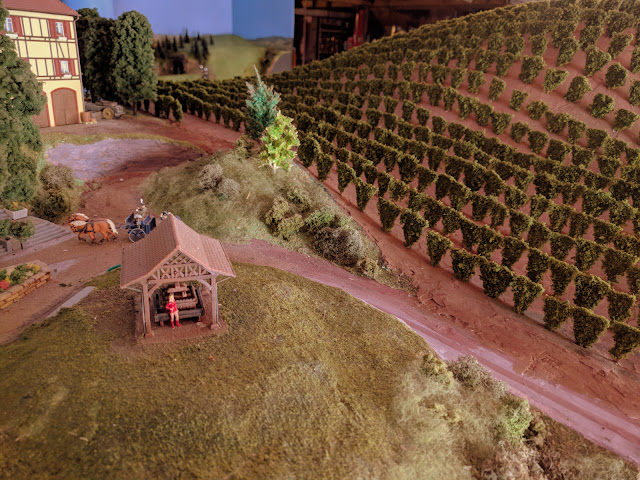 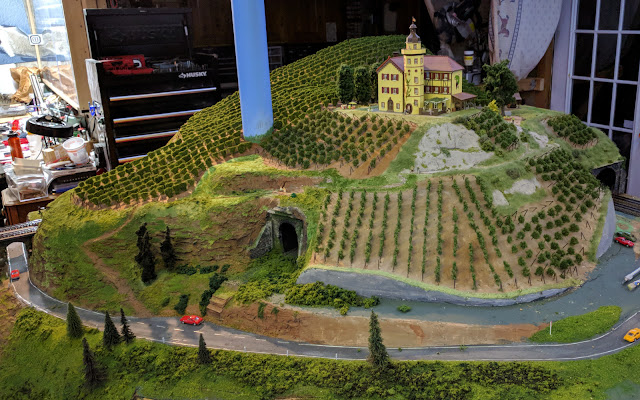 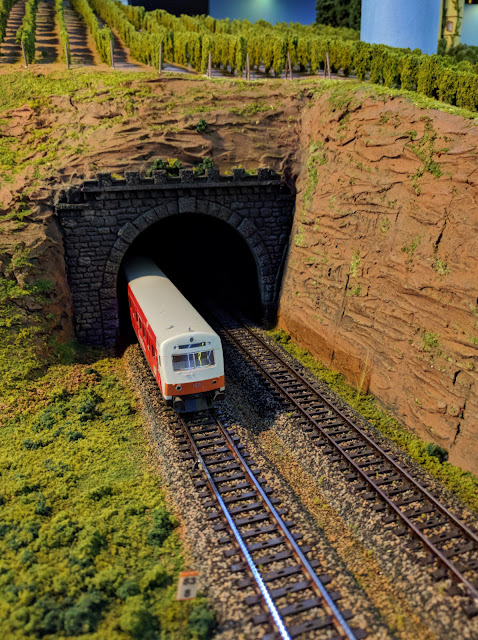