Connecting a track detection point to an s88 module 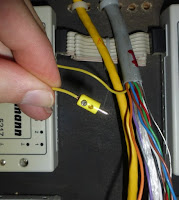 The technique of obtaining train location feedback from the train layout is well known and one typically uses a Märklin s88 module or one of the many modules that perform the same or similar service, such as the Viessmann 5217 modules.

Understanding how to connect the length of isolated track to the port on the module is one aspect of the job. Another is the technique of how to actually get the signal from the track all the way around to where the s88 modules are located. This page documents my technique for doing this.


I prefer to use secondhand multiple (20 or 25) conductor cable of the type that used to be used for serial communications. I scrounged so much of this cable about 20 years ago that I have not had to actually buy any. One can also use regular computer network cables but these typically have only 8 wires. Having more wires in the bundle simply means that one has to pull fewer cables around under the layout.

Here is an example of a cable I just laid. As you can see, the individual strands are distinctly colored and insulated. These cables also typically have a foil covering around the cables to reduce interference from other power sources. This is also good for s88 cables. 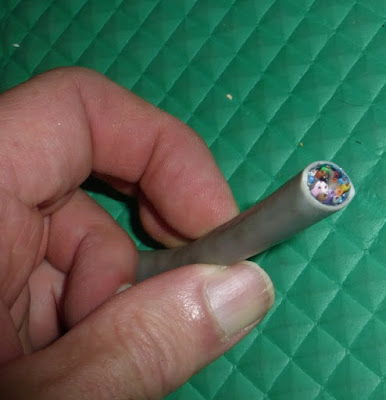 Cut off any plugs at both ends 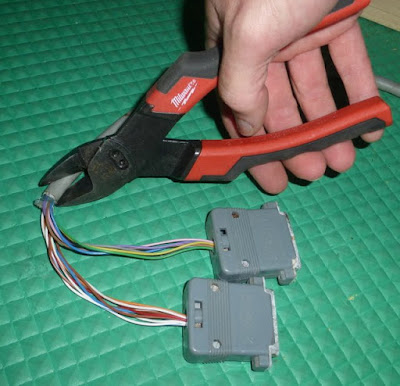 Drill holes in the benchwork below the layout large enough to pull the cable through. This big one demanded a ½" hole. 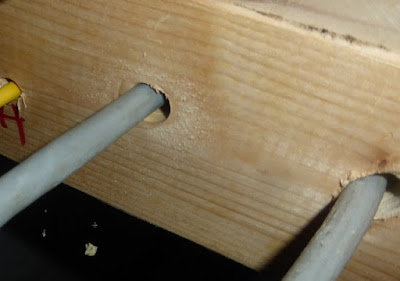 Thread the cable from the furthest point on the layout where you will need track detection and tie a knot in the cable so that it can be pulled taught. 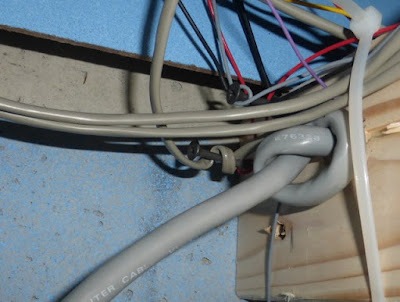 Label each cable at all the holes it runs through. This shows my 'H' and "I' cables. 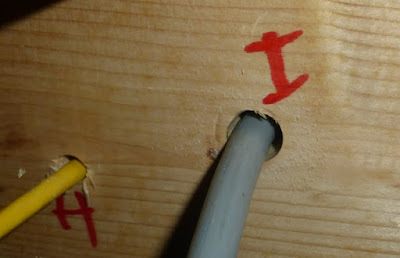 Take it all the way to where you have your banks of s88 modules. These should be close to the digital controller for the layout.

Strip the insulation off the last part of the cable so that each strand can be used independently. 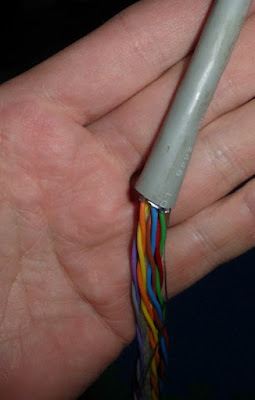 Pull it taught so there is no slack from where the knot was tied back to the s88 modules. Fasten it firmly in place with a cable tie. Label this end too of course. 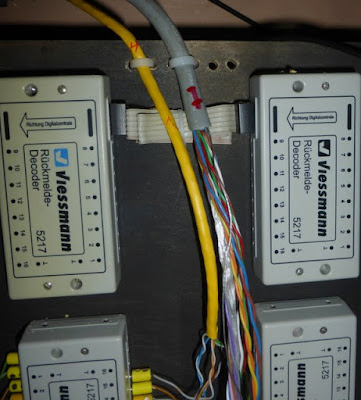 I also strip off the insulation at the far end of the cable too. 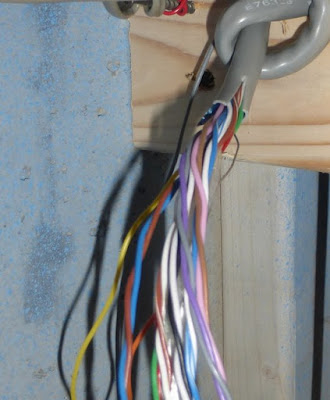 At points along the way where I need to make a connection, I make a slit in the outer insulation and then open it up enough to cut off the insulation for a length of 10cm or so. One can then tap into any of the wires as needed.

Once the cable is in place, in order to use a strand, these are the steps I follow:

1. Find a wire that is not yet plugged into an s88 module, note its color. In this example, yellow is unused.
2. Cut the wire noted above at the point where one wants to connect the track detection. Cut on the side away from the s88 modules.
3. Bring the wire soldered to the isolated length of track (gray) to the cut wire (yellow) and trim both 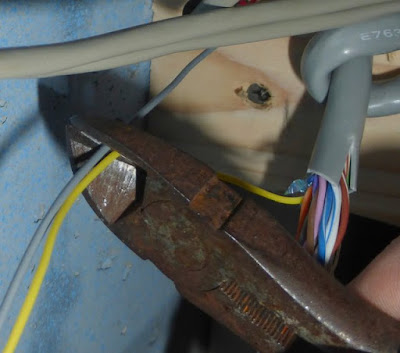 4. Push both wires into a 3M button connector 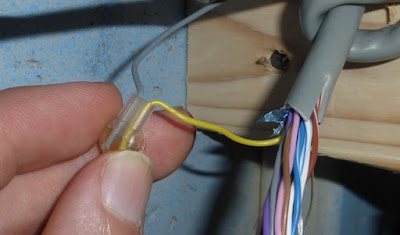 5. Squeeze the button closed with a pair of pliers 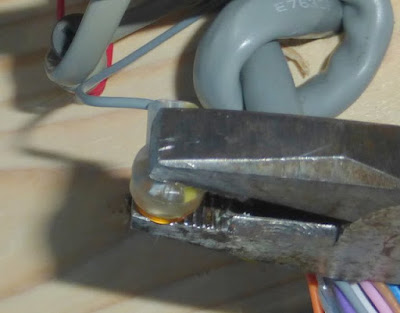 6. Tug both wires to confirm there are firmly gripped and thus making a connection to each other. 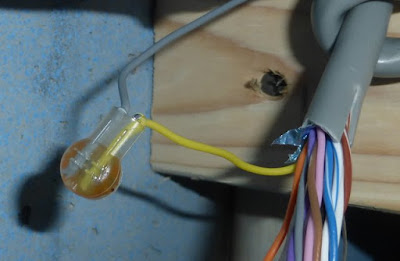 7. Back at the s88 modules, trim the other end of the wire to a suitable length near an unused s88 port 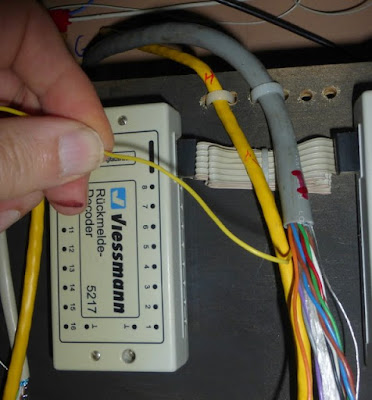 8. Strip the insulation and add a plug 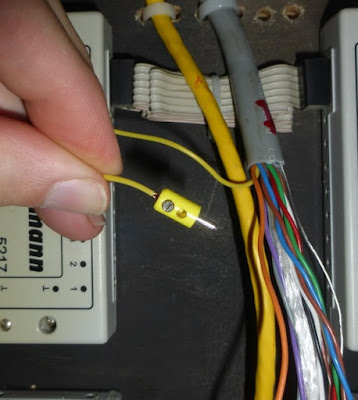 9. Plug the wire into an unused port 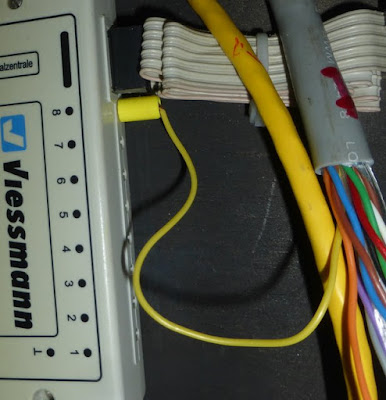 10. Test that the isolated track triggers the s88 port when it is grounded. To do this, I place a small wagon on the track and check in the digital system that the corresponding s88 port is now 'high' 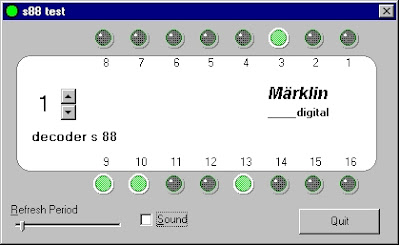 Update - I have some additional images showing how to 'break' into the cable at some point along its path...

First, cut the outer plastic sheath. In this example one can see the foil shield below.

Strip off the foil too, so that you have all the wires visible.

Now find the wire you wish to connect to (i.e. one that is unused at the other end). In this example, purple, and cut it on the side away from the s88 modules. 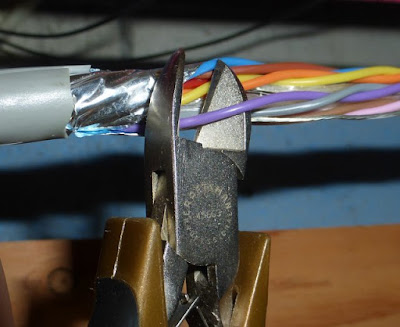 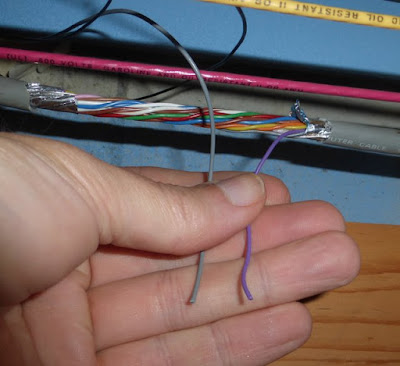 Push them into the 3M button connector and close it with pliers. 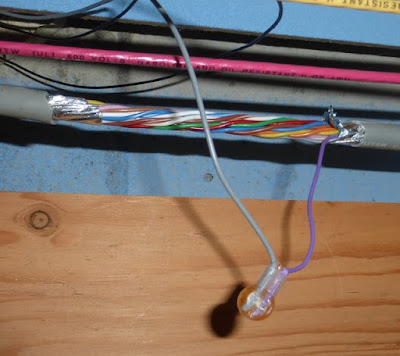