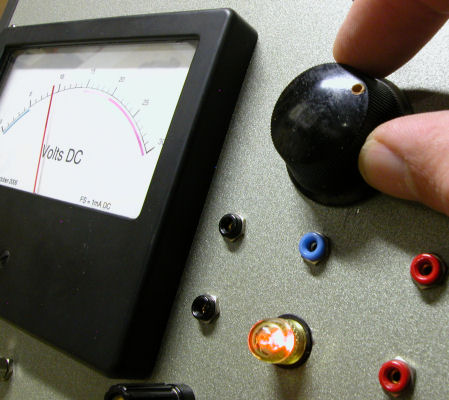 I was recently given a whole pile of old electronic equipment from someone who worked on space rockets in the 1950s and 1960s. I decided to build myself a variable voltage DC power supply from the newly inherited stuff. It turned out to be quite an educational project and a lot of fun using various components so I thought I would share the project here along with my other train stuff. I often use it when testing lights etc on my workbench.

A core item was a very nice DC power supply - a Kepco PAT-15 power supply which I initially thought would make a good power supply for the train layout itself but it is only about 22 watts, so I will use an old computer power supply for my 12 Volt power supply on the layout. I therefore decided to make the Kepco power supply into a test bench variable supply so that I could experiment with various voltages at my work bench.

The Kepco PAT-15 produces 0 to 15 Volts and up to 1.5 Amps. The output voltage is governed by an external resistor - for every 1K Ohms of resistance it outputs 1 Volt. The AC mains input terminals are not insulated so the whole thing clearly needed mounting in some way.

Also in my pile of stuff was a box of very old helipots and variable resistors some of which were old military surplus. I found a precision linear potentiometer that ran from 0 to 20K Ohms which would serve well as the external resister to control the output voltage. The item had been wrapped up for long term storage in August 1956 - this gem had not seen the light of day for over 50 years. It was in its original plastic bag, then wrapped in some padded material which was in turn sealed in a bag that has a foil lining. All that was in  a cardboard box, taped shut and carefully labeled! It is a dual pot with 0-5K and 0-20K Ohms on a single spindle making the whole thing about 10cm long and about 4cm in diameter.

I tested the potentiometer with the power supply and it worked well. In fact, if I cranked it up above 15K Ohms I got more than 15 Volts of the power supply! One time I forgot to connect the pot and the power supply started putting out 30 V Since it is only rated 15V it is probably not too good to go that high so the 20K Ohm range of the variable resistor is fine.

I initially tried to build the power supply and pot into an old PC power supply case, utilizing the original power plug and switch but there just was not enough room despite it being an early bulky power supply. I rummaged about through the stuff I had and found a device in a very nice case. The front panel had a great big Simpson ammeter. There were two inputs, a switch and a pilot light. Inside the case was place to connect two 9V batteries. Despite tracing the circuit of the device my knowledgeable neighbor and I could not work out what the device measured so I gutted it and decided to incorporate the ammeter as the voltmeter.

After I sawed off  ends of the connection terminals on the back of the meter, the Kepco power supply had just enough room to fit behind the meter and there was also room for the big potentiometer alongside the power supply. This case would make a nice enclosure. 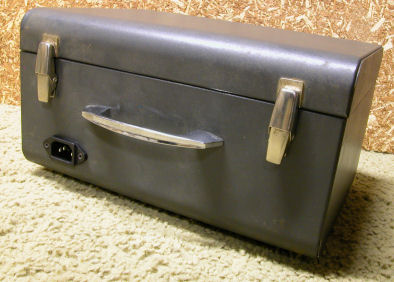 The front panel already had some holes in it so I had to design my panel around the existing holes and I laid out an array of jack plugs, a pilot light, main switch, the voltage control knob and also an adjustment to calibrate the meter. I cut a hole in the top to take a power plug from the old PC power supply.

It seems that pilot lights used in the 1950s and 1960s were typically neon lamps! There is no filament, just two electrodes sitting in neon gas in the lamp. (Don't thow them out if your circuit tester shows no circuit!) The advantage of these are that they tolerate vibration well as there is no filament to break, so they were used in the rocket and space industry. They also need a pretty high voltage to start. Since I have a box of GE NE2J lamps I decided to use one of these as a nice retro pilot lamp. A quick Google search showed that these lamps use 1.8mA and have a voltage range of 105 to 125 Volts. I decided at 115 Volts it would need about a 64K Ohm resistor, so I dug around and found a suitable resistor for that.

I had three types of jack plugs, some larger and some smaller insulated ones and also some that were uninsulated so I drilled enough holes to make a symmetric array of positive, negative and ground jacks on the front panel. I enlarged the old switch hole for the potentiometer and drilled a new hole for the on/off switch.

Now the meter, needed to measure voltage not current so I took it apart and found on the inside the inscription: FS=1mA DC. That means that 1mA will result in full scale deflection of the needle. Since I knew that the upper limit of the power supply was about 30 Volts I calculated the series resistance required to produce only 1mA at 30 Volts. (30K Ohms less the internal resistance of the meter itself; 40 Ohms) I also included a small variable resistor so that I could make small adjustments to the resistance so that the meter could be calibrated.

The meter scale however displayed 0 to 10 mA so I had to make a new scale that ran from 0 to 30 Volts. I was going to scan in the old scale and try to edit the image as the scale was not quite linear. My neighbor and I decided it was to compensate for the increased spring resistance at the high end. I decided to do some web searches first in case there were some ready made scales I could print out. What I found was some software designed to create meter scales at http://www.tonnesoftware.com/meter.html By measuring the old scale I was able to define a pretty cool scale. I was even able to play about with the linearity of the scale and found that a linearity of 0.98 provided a good match with the old scale.

Printing it out however was a problem. The low resolution preview looked perfect on screen but the printed result had problems with the positioning of the numbers, tick marks and labels were missing, etc. I downloaded a PDF generation printer driver and printed to that and then printed the resulting PDF file and that worked fine. Phew.

Now I just had to assemble everything. Not a small job! In order for the meter not to foul the power supply I had to position the power supply very carefully in the case. This required using some long aluminum standoff  tubes and some very accurate measuring and drilling. The position of the power supply meant however that one cannot access the screw down terminals where all the connections had to be made. This meant that the connection had to be made before the power supply was mounted inside the case. So I made a small harness that could be threaded through the new hole in the case for the AC power and connected to the power supply. The other end in turn would have to be connected to the back of the front panel in such a way that one can service the front panel and get the panel off. A barrier strip solved that but meant that I had to double the number of connection lines. And I though the assembly would be the easy part!

After connecting the resistors to the meter I tested with a 1.5V battery and it worked. What a relief getting confirmation that I have applied the right formula and got the resistance correct.

I tentatively plugged the power harness to the AC mains supply and tested the neon lamp from a safe distance. No explosion or smoke there either, just a nice orange glow. 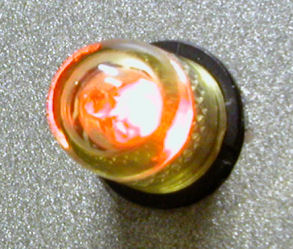 Since I could potentially have at least 1.5 Amps running about the DC lines, I connected all the jack plugs together with pretty heavy gauge wire and over soldered everything. The lines from the incoming AC to the switch and back to the barrier strip to go off to the power supply were connected with 14 gauge solid copper wire pulled from some Romex house cable.

The Kepco documentation states that the resistor lines should be shielded and I managed to find some dual core shielded cable for that. I think its overkill since I am not that concerned in the absolute resistance, but will simply adjust the resistance until I get the desired voltage output.

I connected it all up and tried it out before installing it all into the case. Nothing. No meter movement. Pilot light was on OK. Measured the voltage at the power supply.. yup it was getting 110 Volts AC. No DC voltage either. Panic. Switch everything off. Disconnect things and test them individually. Meter not working. Had I blown it? By now the meter was a central aspect of the whole project so a dead meter would be a disaster. And why no DC voltage either?

Previously I had tested the meter with my digital circuit tester. Doing so would make the needle go half way (Telling me by the way that the tester was using 0.5mA for the test.) so I tried that again and noticed that the new paper scale had warped and was fouling the needle. So back to instrument making, this time I glued the new paper scale to the back of the old aluminum scale and reassembled the meter. It worked again. Reconnected everything again and it all worked, even the all important DC output! 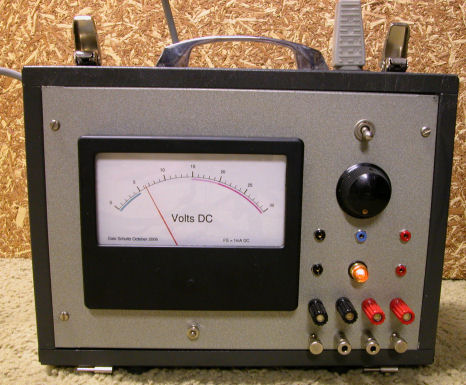 Many thanks to Dick for not throwing out your decades old electronic components. I have found it all very educational and this made a great zero cost project. I am sure the power supply is going to be very useful.
Email ThisBlogThis!Share to TwitterShare to FacebookShare to Pinterest
Labels: Power
Newer Post Older Post Home