Last march I talked about running a DC power bus around the layout in addition to the 16VAC and digital lines. An obvious source of clean DC power is an old PC power supply harvested from an old computer.

I found that other hobbyists (Example 1 and 2) are doing similar things with PC power supplies so this weekend I went ahead and built myself an interface between any PC power supply and my DC power bus.

First I looked for a suitable housing. I found an old power supply from which a meter had been robbed by the previous owner. It already had some output jacks plus some switches I would be needing, so I pulled its guts out. It had a heat sink for a large transistor and decided that would work well for the 10 Ohm 10 Watt resistor I would be needing.

I decided I wanted a fuse in the system and by filing the hole from one of the switches I could install a panel mount fuse holder. What to do with the other switch hole? I decided to make the 12V source from the power supply available also so I slapped in a third output jack in the remaining hole. Now the only gaping hole was where the meter was. I went to the garage and found an Ammeter that fitted the hole so I decided it would have an Ammeter also...

Since the primary use of the DC supply is for LED lighting I am was using the 5 Volt output. The 230 Watt PS I have will produce 23 Amps of 5.15V DC current. That is a lot of DC power! I installed a 4A fuse before the meter (its a 5 Amp meter). Update: I have since switched to using the 12.2V output of the PC power supply as I found that I often wanted to run more than one LED in series in a building and 5V was not enough.

The white LEDs I have, have a forward voltage of 3 Volts and can consume up to a maximum of 30 mA of current. This means that a 634 Ω series resistor will be required for each LED to consume about 16mA. That means I can power 250 LEDs before the 4A fuse will blow. If I use a 5A fuse I could drive 312 lights. I have no idea how many I will need but it sounds like a good start. If I need more than that I can remove the Ammeter or insert a shunt resister to extend its range.

To provide a place for the PC power supply to plug in, I used the Y-splitters that are used in PCs to connect additional disk drives. Each Y-splitter has a female version of the 5V + 12V power harnesses. Since I can potentially have 23 Amps (or more) of current, I used four and combined all their wires together on a cinch strip. Some power supplies require a half  Ampere load to operate so I bought a 10 Ohm 10 Watt resistor to place across the 5V circuit. I cemented that on top the heat sink with heat sink compound.

Here the front panel with jacks, fuse holder and meter are connected up to the wiring harnesses and resistor for bench testing. 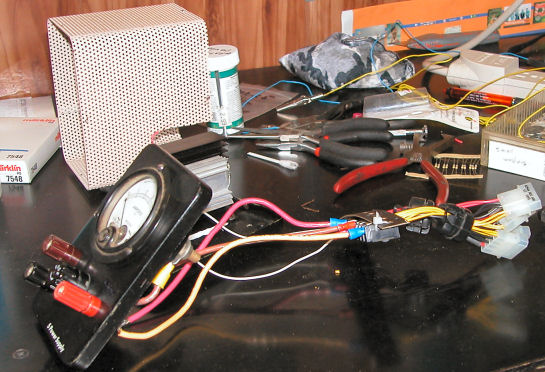 For the internal connections between the cinch strip, fuse holder, Ammeter and output jacks I used 12 AWG household wire.

Here is its plugged into the PC power supply, and driving a single LED with 75 Ohm resistor. 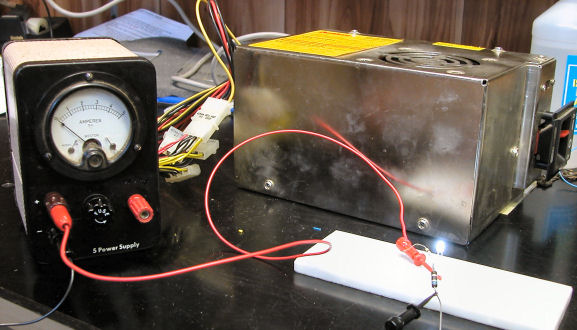 The Ammeter is overkill but it may be interesting to see how much current the lighting uses. With a single LED one can see the needle move as it is switched on and off - responding to the 26 mA draw ! By building a generic interface, I will be able to substitute any PC power supply if my current one dies.

The next step is to test it using the common ground of the layout and to run the new wire about under the layout.

Update: I decided it would be nice to have some pilot lights so I added two LEDs 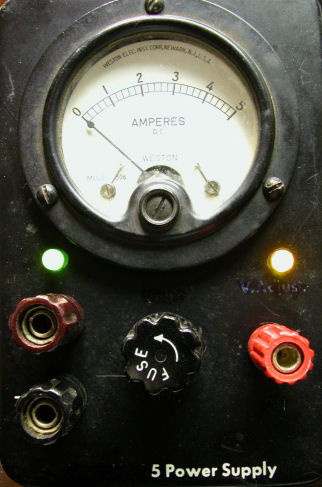 For ATX or EPS type supplies with 20 or 24 pin power connectors you also need to ground the green wire (pin 14 or 16 depending on the number of pins on the connector) by shorting it to a black wire to make it turn on. (On these PC's the motherboard commands the power supply to turn on using this wire since the PC's front panel power-on switch is connected to the motherboard, not the power supply as it used to be in prehistoric PC times