In order to keep costs down I decided I would buy the kit versions of the Viessmann 5221 module that is used for switching turnouts, signal control modules, etc. It is the equivalent of the Märklin k83 module. The Viessmann item 5291 is a kit containing all the components to build a single 5221 module and is cheaper than the 5221 (which in turn is cheaper than the Märklin k83)

It takes some time to build each module and the first one takes longer than the rest. If you do a whole bunch one after each other it gets much easier. After doing a few I was able to do them in just over an hour each. Since I have almost finished assembling my kits I thought I would photograph the process so that others can decide if it is worth it to them or not to buy the kit versions.

The kit comes in a box much like pre-assembled modules... 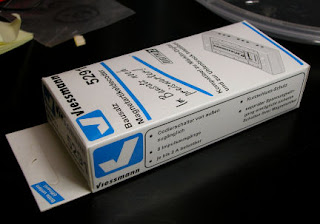 Inside is a sealed bag of components, the housing, a set of assembly instructions and the normal instructions for the completed module. 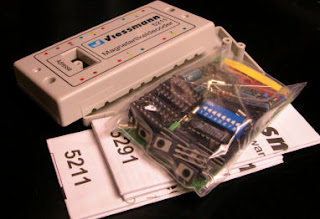 I always carefully tip all the parts into a shallow tray so that I can pick out the ones I need and none can get away... 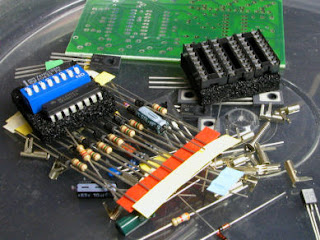 The circuit board is printed with the component numbers on one side.. 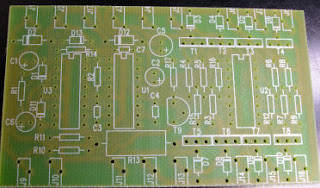 .. and the other side has the nickel-silver solder pads onto which all the contacts will be soldered. 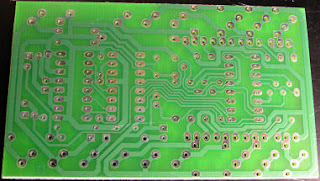 The instructions provide a nice table that lists all the steps in a pretty good order and a place to check off what you have done as you work through it. The order is generally from smallest component to largest components - this is good as it allows the smaller parts to be fastened close to the circuit board. If the larger ones were done first, the small ones would not be held up when working on the underside. After doing a number of kits I decided however that it is much better to solder all the plug sockets on as the very first step since they have to end up planar in order to fit into the housing. It is best to get them all done and nice and flat before adding the next components which are not much smaller anyway.

So, here I have soldered in the sockets, 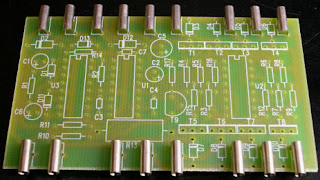 Here are some of the types of components that have to be soldered in...
Capacitors 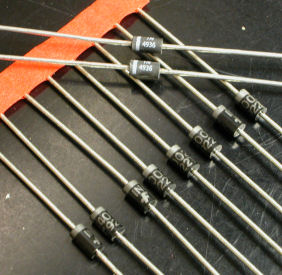 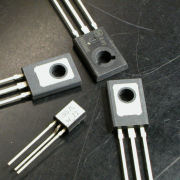 Zener diodes  (their markings need a magnifier to identify them)

The electronic components need to be bent so that they fit through the holes, then the 'legs' are best splayed outwards to stop it falling out before being soldered in place. 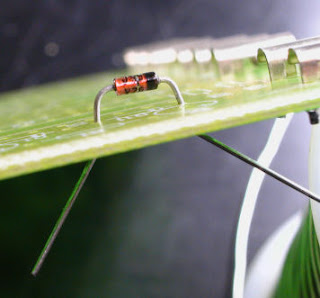 Each 'leg' protrudes through a hole on the underside which has the solder area ready for soldering.

A small spot of solder forms a nice shiny conical shape around the 'leg. 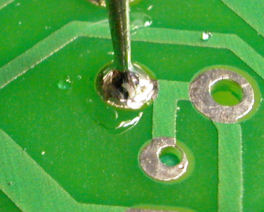 and is then cut off with side cutters. 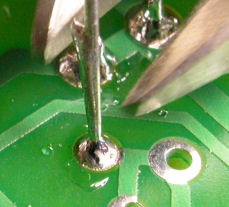 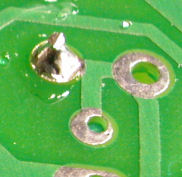 Diodes and some of the capacitors have to have their polarity correct, with diodes the line on the diode has to correspond with the line printed on the board. 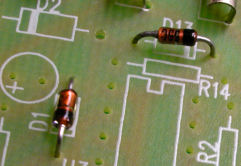 Here diodes D3, D4 and D6 have been inserted, D5 will have the same orientation.

Most of the smaller components are in place 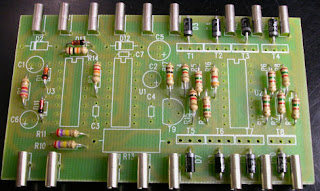 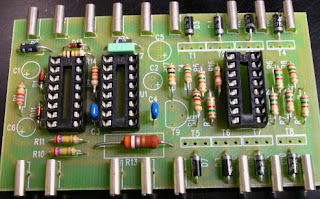 The bigger capacitors and the power transistors complete the soldering 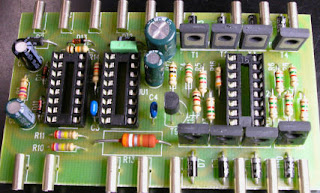 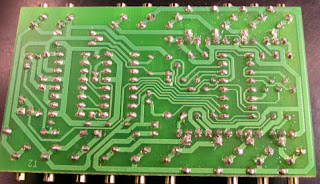 The two chips and the DIP switch are pressed into the holders. Take anti-static precautions when handling the chips.
Once the chips are in place, the board is placed in the housing.

After the lid is screwed down it is time to test the module.