After playing with software for a couple of months I am back to my signals project....

I had to mount my rack of signal modules and their digital switching units - that was pretty easy because I measured where the studs in the wall were before I laid them out so it just took 2 screws and three connections to connect it to the layout.

I inserted cable ties along the lower edge in preparation for the numerous cables that will connect the signals to the module outputs. 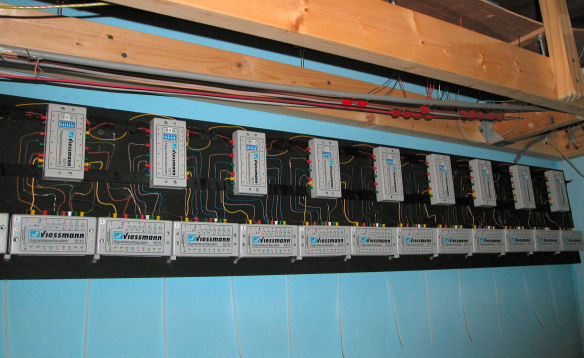 I have a shunting signal at the end of each of my 8 main sidings. These are Viessmann 4018 signals with LEDs. I decided that since these need to be in a straight line, and since the human eye will easily pick up any that are out of line I decided to use my laser line again to ensure the holes are properly lined up. 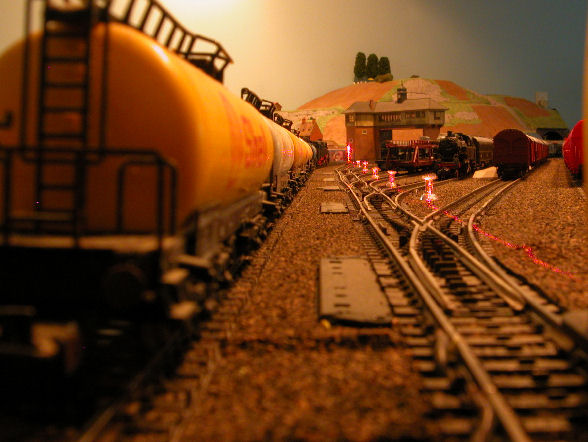 I pushed transparent map pins in to mark where each hole should be. 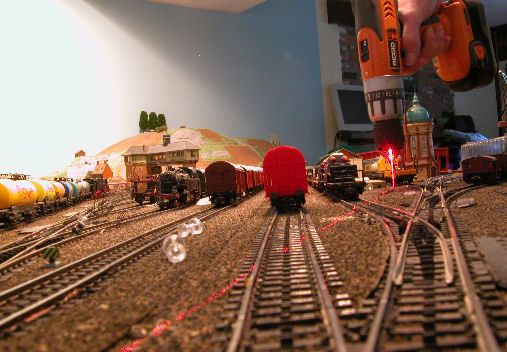 Since I have two distinct types of signal to install, I decided to wire them a bit differently. I have 8 two-aspect signals to install, each of which has 3 wires. Then I have 11 main signals which have 6 wires each. I have some cables with 8 strands at hand. Viessmann states one should connect the common ground as well as the aspect lines to their module, but since the ground is common, and after some inspection of the circuit within the modules I have concluded that the signal ground (black lead) can be grounded anywhere to common ground and does not have to be run to the signal module.

Since my modules are all in one place (to save on switch modules) I decided to optimize my wiring as follows:

In order for the signals to be removable for landscaping and maintenance etc, the 2 aspect signals can be disconnected below board, and the bigger signals will have about 30cm of slack in the cable so that they can be moved about as needed.

This plan seems to be working fine. The 8 shunting signals needed 2 cables and I made up the module ends first and then worked the cable to the connectors near the signals.

Here is one cable harness being prepared on the workbench. The length of each signal module is 11cm so I made 4 marks on the bench (green) to get the spacing correct.

I will probably need to do a bit more final positioning of the signals due to the softness of the Merkur ballast. As you can see, the first signal here needs a bit of straightening because of the uneven ballast at that point. When I get to do the final landscaping I will ensure that is taken care of.

The larger signals are soldered onto their cable before installation. (I don't solder things upside down under the layout, it was bad enough when I dropped a screwdriver onto my face and it hit my recent lip surgery)

So far I have installed 2 of them and they went in without any problems. Don't underestimate the length of cable needed ! The two I have installed so far are about 2 meters from the modules but the cable has to run 5.5m to get there!