I was pleased to see that Märklin announced LED interior lighting so I ordered some sets and today I got around to trying them out.

Each light strip is a 10cm circuit board and they can be connected together or cut in half, allowing any length in increments of 5cm to be created.

In each 73400 box you get a 10cm strip, two plastic clips and two pieces of double sided foam padding plus a generic set of instructions.

As you can see each half is identical to the other.

The white plastic clips can hold the light strip at one of two different heights and they stand on the top of the seats of the interior detailing of the passenger wagon.

Using a 73406 current feed set it was very easy to install a pair into an S-Bahn coach. Pop the lid off, clip the pickup shoe into a bogy, pop an axle off the other one and slip the copper shim under the axles (trim length as needed) and replace the axle. Each has a wire that threads up and connects to either end of the two light strips that are joined together. 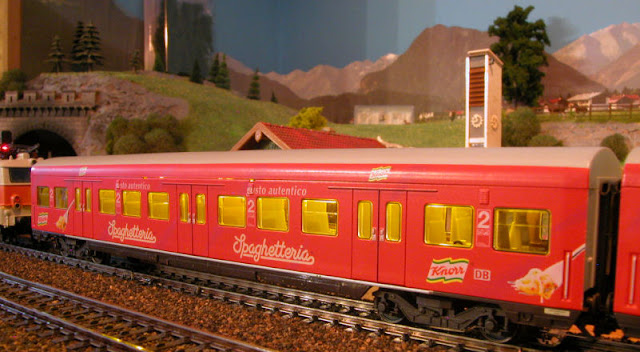 Then the big moment, I placed the wagon on the rails and switched on to see the color of the LEDs for the first time. They are a sickly sort of green.
To me this looks out of place in anything that was most  likely to have florescent lighting. White LEDs would have been much better.

It looks OK I suppose, but I did expect more in this age of white LEDs. Even warm whites could pass for incandescent lighting.

Close inspection shows that it seems that a the strips were also designed to have a capacitor (presumably to stop lights flickering due to momentary current loss). See the position marked C1... that would be Capacitor 1 - clearly empty.

Each half has 3 greenish yellow surface mount LEDs on the underside, here you can see two.. 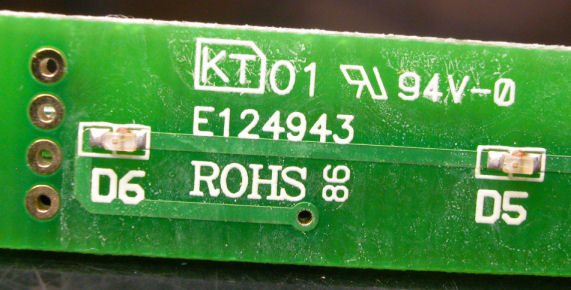 I Intend installing the others into some Würtemberg coaches and I will probably install an old loco decoder in the baggage car (to allow switching on/off) and run a tiny pair of wires along the length of the train to power a single strip in each car. Here is a single strip (upside down) on the Würtemberg  interior details - I think I can get away with a single strip even without cutting it in half to provide more separation.

The lights are easy to install but the color brings my rating down. In addition, the lack of capacitor is unwarranted.