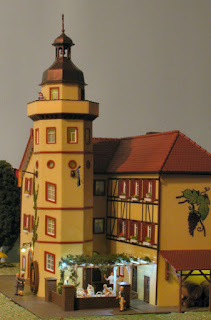 The Kit
The box says 745 pieces in 13 colors. I did not count them. The kit also contains many additional pieces and some that are not used at all. I suspect Faller is using standard sprues for multiple kits which makes a lot of sense.

A variety of national flags were included.

Nice features
The gutter is integrated with the base of the roof. This is so much better than having to attach gutters.
The cutting guide for the window foil makes cutting the windows very easy.

I removed some lugs from a wall that held the roof down so that the fully assembled roof could be removed. I added a cardboard base inside the roof such that some heavy metal nuts could be glued into the roof to give the roof high mass - so that it sits firmly in place without being glued down.

I masked out some of the windows so that not every room is illuminated when the interior lights are on. 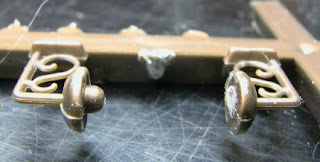 I attached a surface mount LED to an exterior lamp. First I removed the dummy lamp. 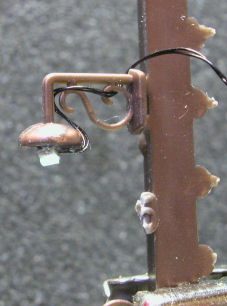 And then glued on the LED and tested it.

I added some yellow paint: 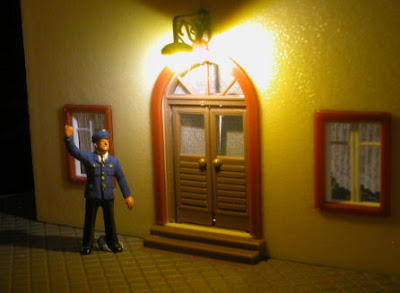 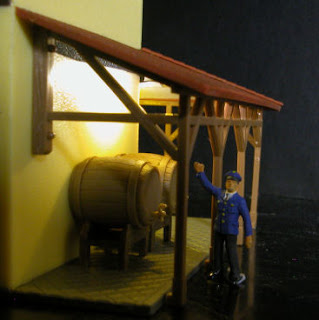 I also added two LEDs in the exterior passageway


I painted the barrels and 'Zapfen'. 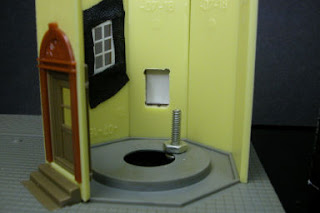 The bolt though the base is to hold the interior light firmly in place.

I assembled a set of 5 LEDs to light the tower from inside... here seen standing next to the tower: 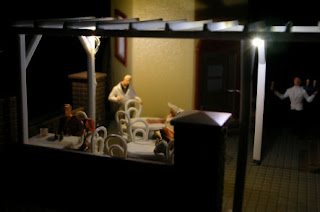 I added lights to the trellis:

I decided to omit the additional white fencing they indicate should be mounted inside the brick walls as well as the gate at the side. They simply look absurd and I cannot imagine why a restaurant would add a metal fence next to a brick wall. 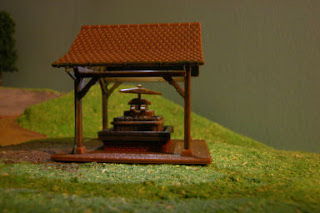 Painted the brick base reddish to look like brickwork. Weathered wooden parts, and copper gutters and downpipes.
Added a light. 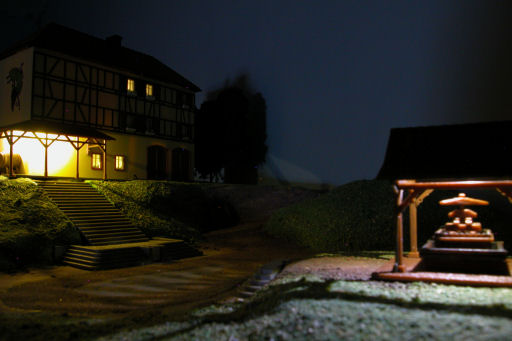 
Design errors and things that could have been done better

Some of the windows can be made from individual frames and glass so that the two window halves can be position in an open position. Nice, but the way the frames are constructed, the windows cannot be made to open outwards - they only open inwards which is highly unprototypical! Fortunately the kit contains enough pieces to build all the windows using normal window frames.

There are some curious lugs on the insides of the walls around most of the windows. These get in the way of the window foils and requires unnecessary demands on precision cutting of the foils.

Step j does not indicate that window foil number 6 should be applied.

This is a 2 story building. Each story has its own wall - this means that the lower and upper story walls have to be joined together. Instead of making one of the walls with a small lip to aid in being glued to the next story, they supplied small 'plates' that have to be glued onto the upper and lower walls along the join on the inside. I see no logic in this other than to push the number of discrete pieces higher. The model would be stronger and easier to build if the walls were made to fit onto each other. In addition, there are no lugs or notches to ensure that the horizontal alignment of the two walls is perfect. It is very easy to glue the walls together and have the upper one ever so slightly shifted left or right resulting in a small gap at the corner where the two walls join the next two.

The front facade of the building should have been a single piece. It is not very large but by making it in two halves the finished result has a unavoidable joint half way up the wall. The big illustration of the building on the box does not show this join and either the picture was doctored or the original prototype used a single piece. A second wall has the same issue but that joint is hidden by a lean-to roof.

The large doors to the wine cellar each have three panels on the front into which three wooden panels are to be glued. The outer two panels have some molding bumps that prevent the wooden panels from lying flat inside the door. Its small but visible.

The paper mask that goes inside the building and has the curtains etc printed on it is a vast improvement over the system used in the 1970's but suffers from two problems.


The paper mask could have been made 1mm shorter. There is no need for it to go all he way up to the roof base, but by making it so high it makes it difficult to make a removable roof sit firmly in place since it touches the top of the paper mask. This necessitated a weighted roof.

There is a variety of window designs with different curtains and plant pots etc, but they are very foolishly distributed with identical windows images immediately adjacent to each other. It would have been trivial to place identical images on different sides of the building so that they are not adjacent. 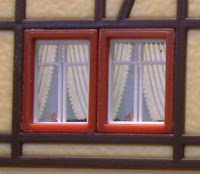 There are 22 pairs of shutters to be applied. Each shutter was attached to its sprue in three places. One of the attachment places is right next to the hinge of the shutter. Removing the remains of the sprues is tedious and not easy next to the hinge. If they had been attached to the sprue in only two places and not on the hinge side it would have made this step much more pleasant. Any why not simply feed the plastic in from the back of each piece...?

There are two pairs of windows that are adjacent to each other (double windows) yet the shutters for these windows are the standard size and would only cover half of each window when closed.

The shaft of the wine press handle was too large to go through the hole at the top of the press. It had to be sanded down with water paper to get it inserted. It is a very fragile part and it was half broken off the handle by the time I was finished sanding it down. 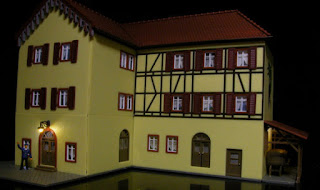 The yard will have a tower and outdoor restaurant.. 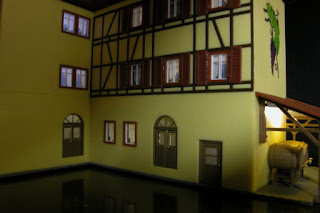 I built the tower without gluing each layer to the one below... 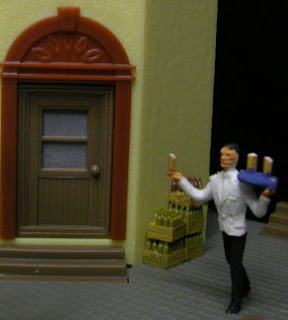 I added a Merten waiter:


and some Preiser people to the tables and some bottles etc.. 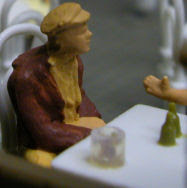 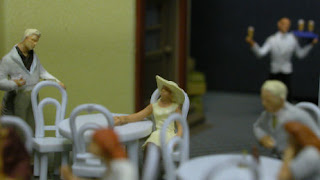 A view of the inside, without the paper masks. 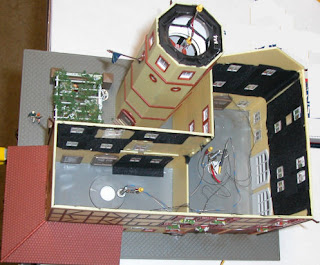 The finished building in place I like this kit. If I did not have to redo all the masking for interior lighting it would have received all 5 stars.

More images of the completed model and night images.
Addition of vegetation and details.