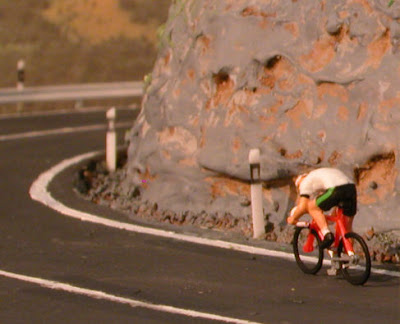 Faller managed to use two different colors of plastic that are actually molded together to create the 'Leitpfosten'. I had not seen that before and I wonder if it is some sort of experiment. The black markings and molded into the white posts. The reflector posts come in two sizes, full size (about  14mm) long and a short version about 8mm long.

Presumably the short ones are meant to be mounted on top of the guard rails but there is no shaping on either part to enable a firm attachment, it is much more practical to glue a full length post behind the guard rail and have it stand on the ground.

The guard rails are one sided !  It is shaped on the front with the prototypical curved profile, but the back of the rail is a shiny flat surface that defies logic. Now this may not seem like a big issue but if you think about it, most model roads needing guard rails are set into a hill that faces the observer. This means the guard rails are one the side of the road nearest the observer and are this facing away from the observer and onto the road. In other words the side that is going to be most often seen is the back!  This was most disappointing. Installing them backwards would place the legs on the road side - not acceptable.


The color of the plastic is a gray color. White would have been better.

Since the surface was shiny and the wrong color I had to paint mine white before installing them.

Where my road goes through a cutting, I glued the short posts directly to the wall at the side of the road. There is little else one can do with them.

Another problem with the guard rails is that the legs are all perpendicular to the rail, this means that if installed along a road that is not horizontal, the legs will not be vertical. It would have been much nicer if the legs could have been applied at the appropriate angle to suit the road. I bent each one slightly with my thumb - which improved it a bit. Most roads on layouts needing guard rails are not horizontal. 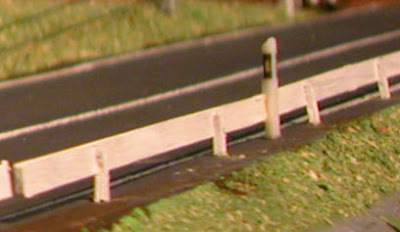 Note the flat side that faces the observer !

If Faller included the detail on the rear of the guard rails, and provided some way for the short posts to be reliably mounted onto the rails I would give them 4 stars. For 5 stars I would expect the legs to be made so that they could be vertical when used on a sloping road.