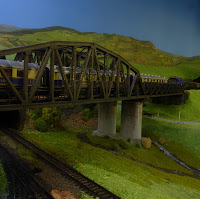 My layout will have a long double line loop around the middle of the room and this loop will have two bridge areas to add interest. I am really keen to get this big mainline loop connected as it will finally allow me to run trains properly instead of running trains in one direction and then having to reverse them back again. Many consists do not reverse well so getting a loop of track will greatly enable my running capabilities.


I have all the benchwork in place for the mainline loop, but as I said, there are these two bridge areas that need to be handled. I realized that I need to know how the land will lie below one of the bridges because I need to position the support in the right place. That necessitates that I get the topography in place and so this really means that I must put off laying the tracks and do some mountain building first.

The following photographs were taken at various stages of building the mountain. Actual landscaping (grass trees etc. has still to be done).

Part of the main loop comes out of the hidden area below and this area still had to be covered. 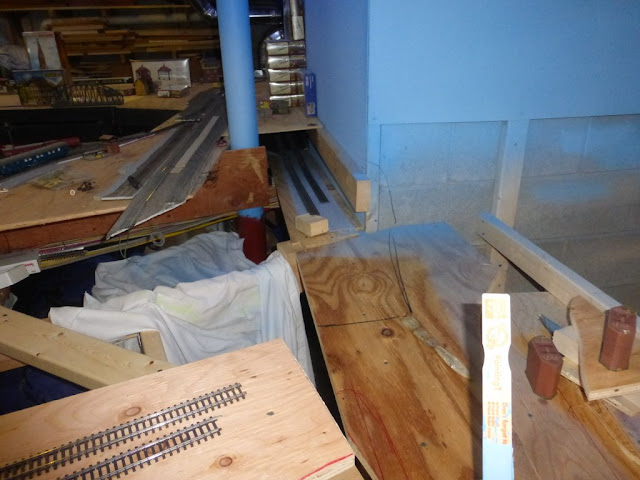 I also paint the areas just inside tunnels black so that, was the next step... 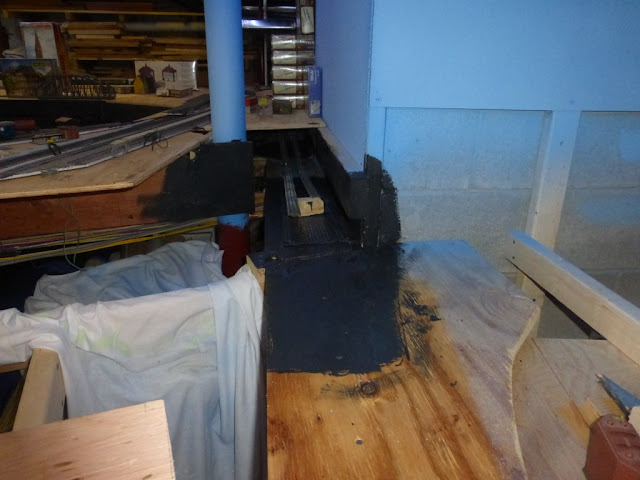 Then I cut plywood to fit between existing pieces.. and laid a bit more of the lower track and tested it. 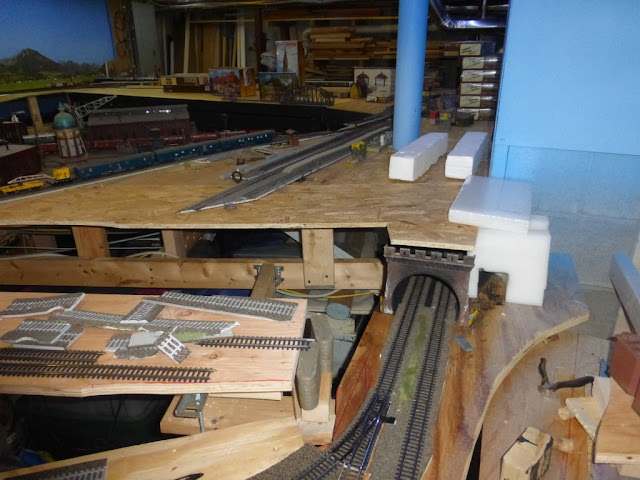 Now the mountain itself could be started. I decided at add a road going into the mountain and under the bridge. I cut some wood to approximate the height of the land at various parts of the mountain... 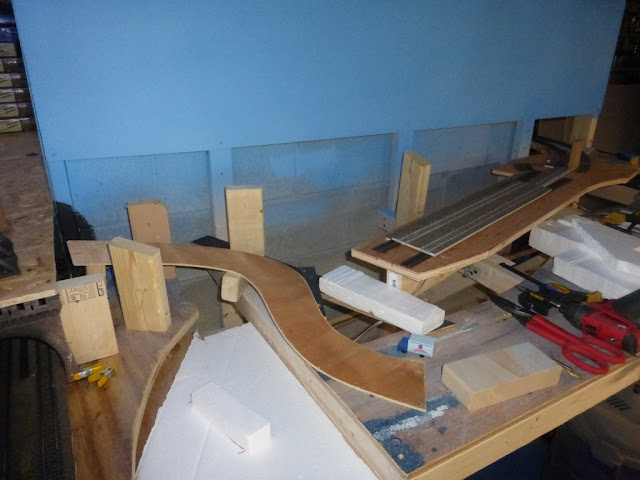 I had a roll of ½" hardware cloth (wire mesh) and screwed that to the base of the sky backdrop... 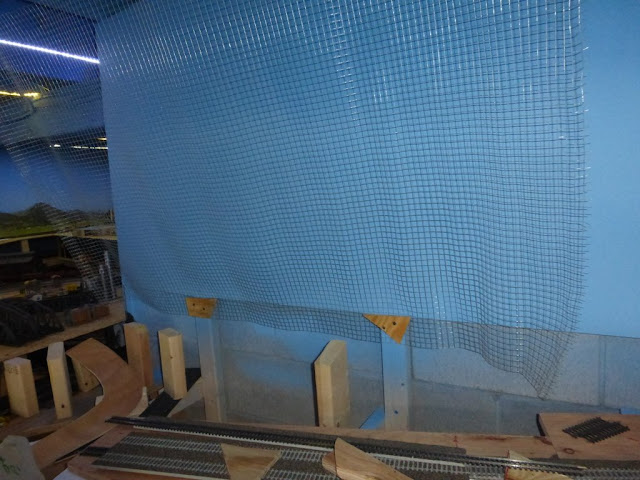 And bent it down to form a hill. 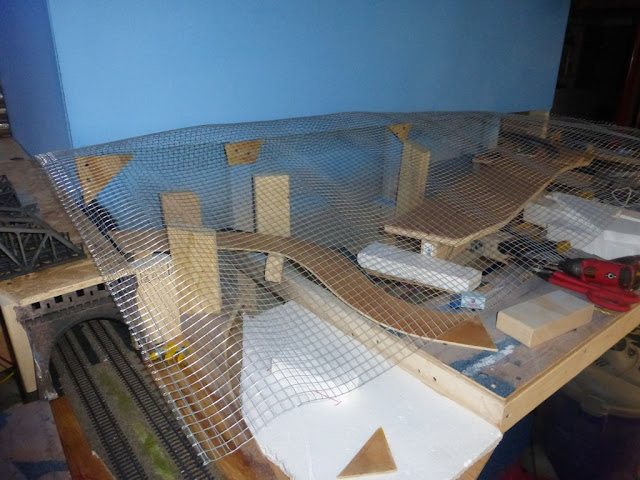 Using large tin snips I cut the mesh at the edges of the slopes. NOTE: do not attempt to handle such wire mesh without thick leather gloves! 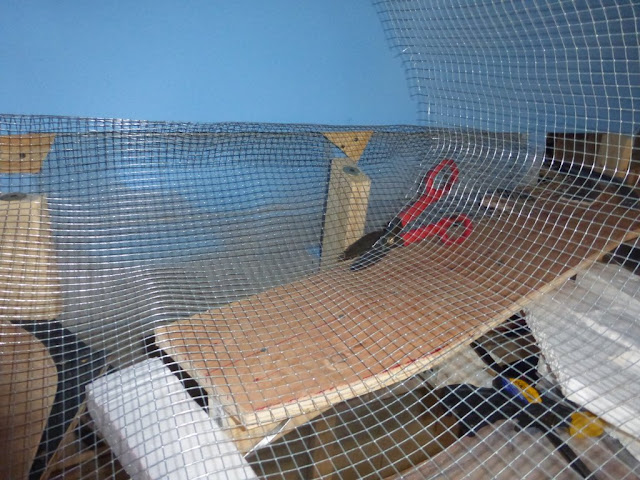 I screwed the mesh onto the wood 'height' holders using washers. 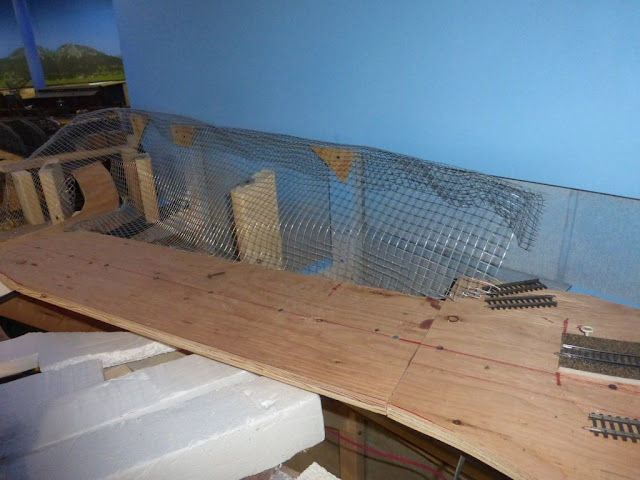 Formed the slopes as needed... 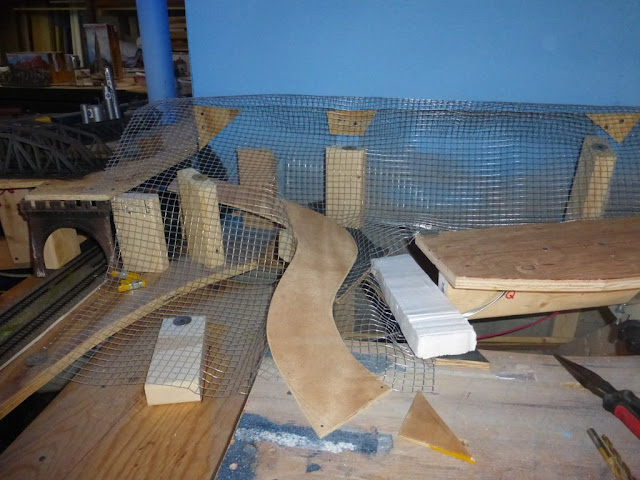 I then ran out of the mesh and bought some ¼" mesh which is much better.  I used that to complete the hill on the right.
Tip: Cut the edges larger than needed then fold it over and hammer it flat to make a less razor sharp edge. 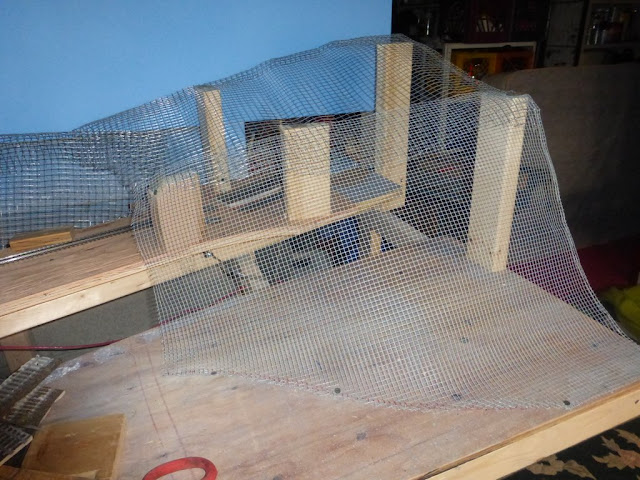 Once the forms of the mountain were done, I covered the whole area with an old sheet in preparation of applying plaster. To keep the sky clean I fastened some plastic to it to protect it from plaster. 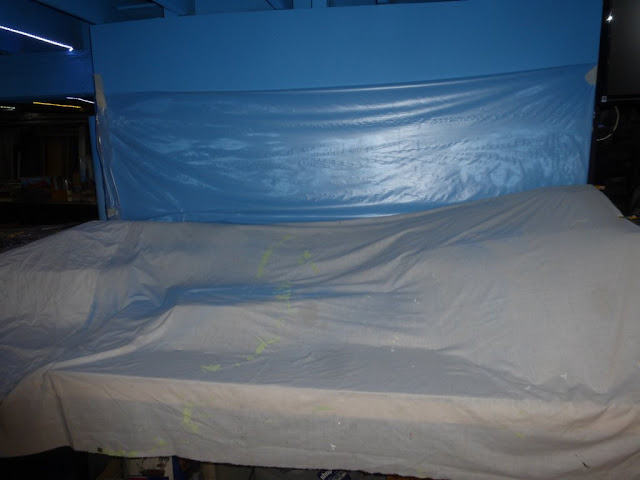 I then covered the hills and slopes with plaster.... 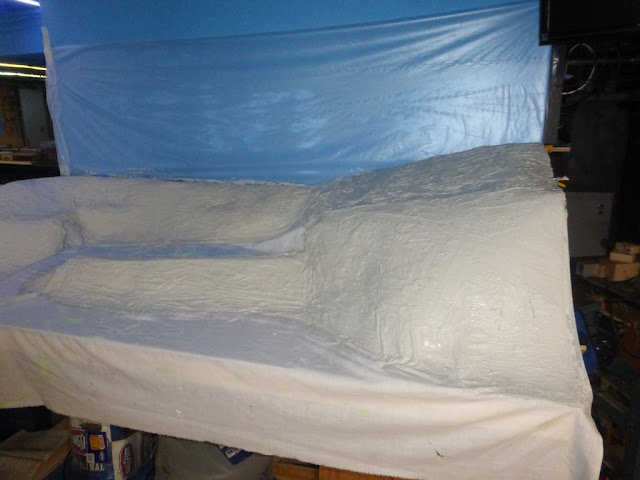 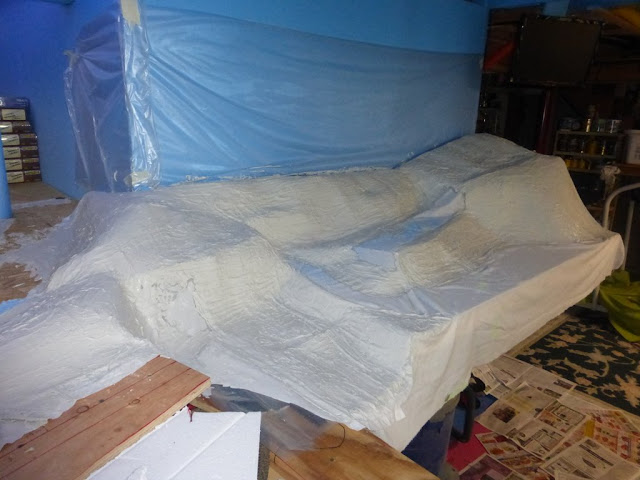 Once the plaster was dry, I cut the sheet at the edges of the slopes and tunnels etc. 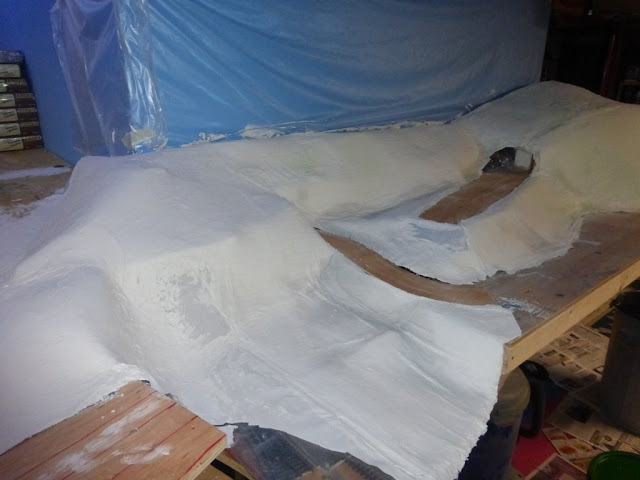 I placed the plastic tunnel portal in place to see how it would fit... 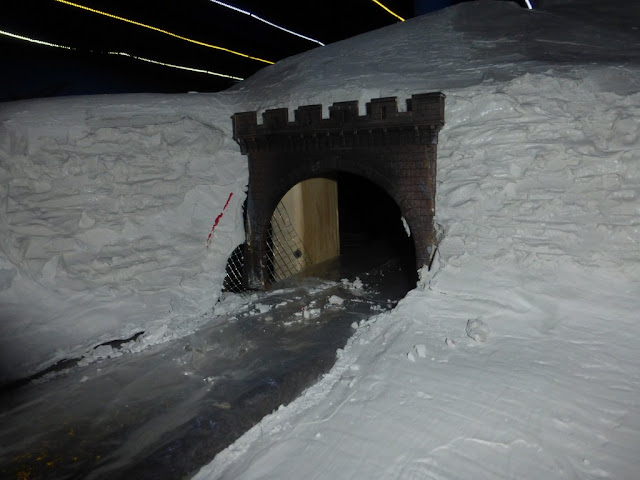 Areas that are going to end up vertical cliffs I painted black to form dark undercoat. Areas that are to be vegetated I painted green to provide a good solid color. Keep in mind these are just undercoats for later landscaping. 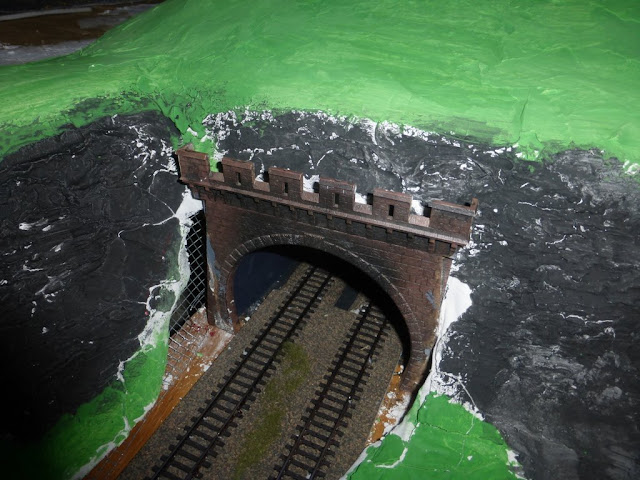 I cut away the place where the bridge supports would be and inserted the supports. 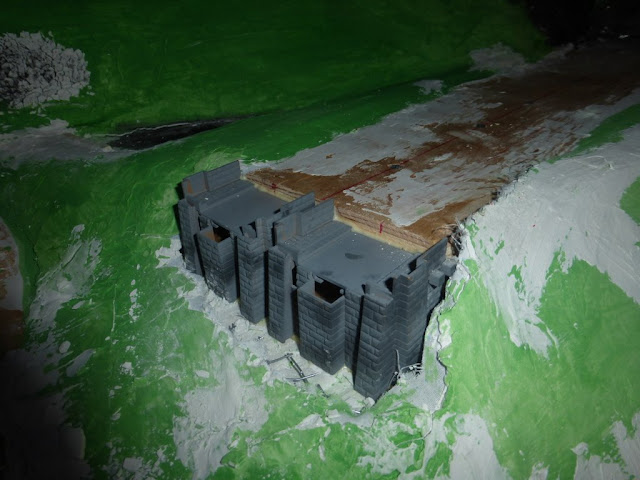 Additional rounds of adding plaster was needed around the tunnel portals and bridge support areas... 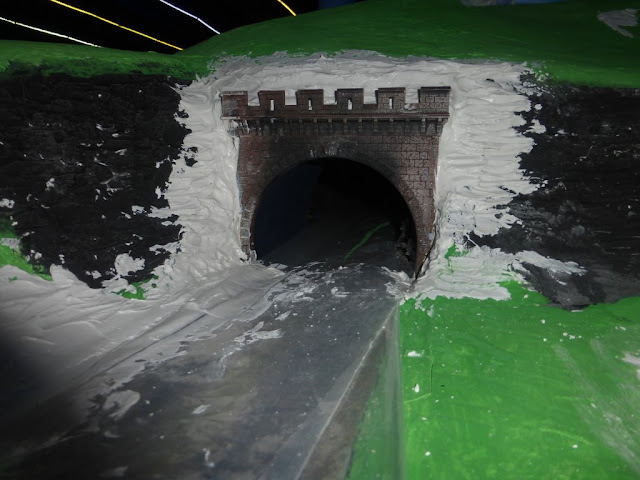 Here new plaster has been applied around the supports at the right end of the bridge. I am sizing up the height of the base to support the bridge piers in the middle. 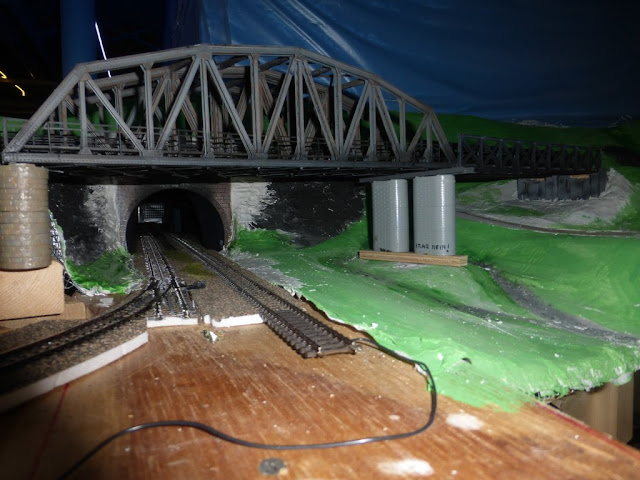 The area behind the mainline suggested a small pond so I added a wall and some dark paint. 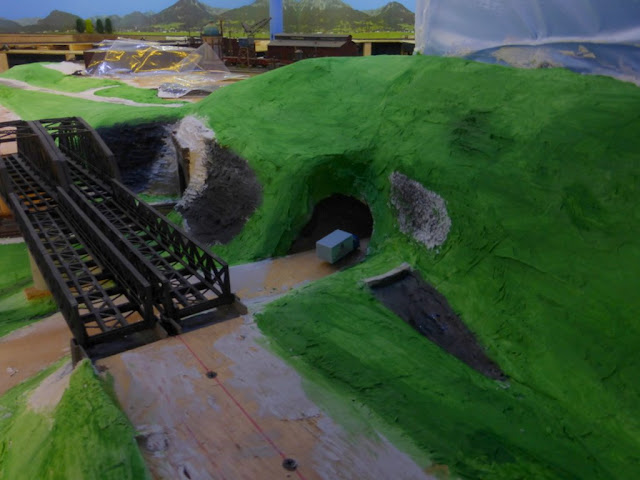 Newly added plaster gets painted (sometimes before it is even dry!) 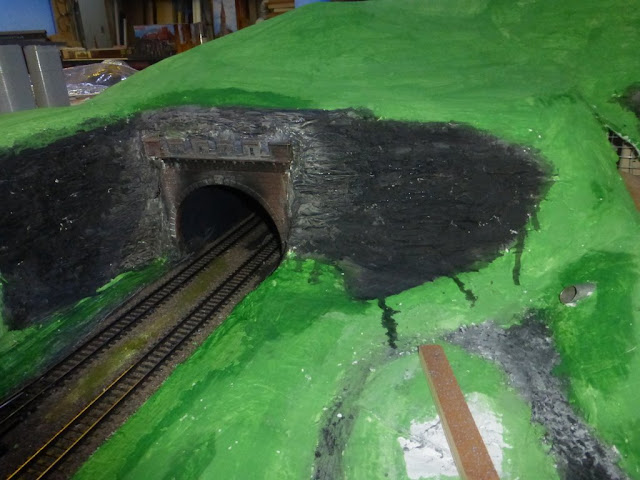 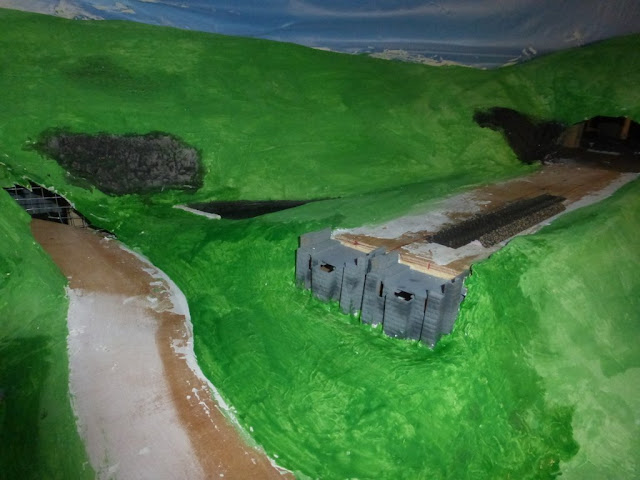 The foundation for the bridge piers was made from some plywood and then covered with plaster... 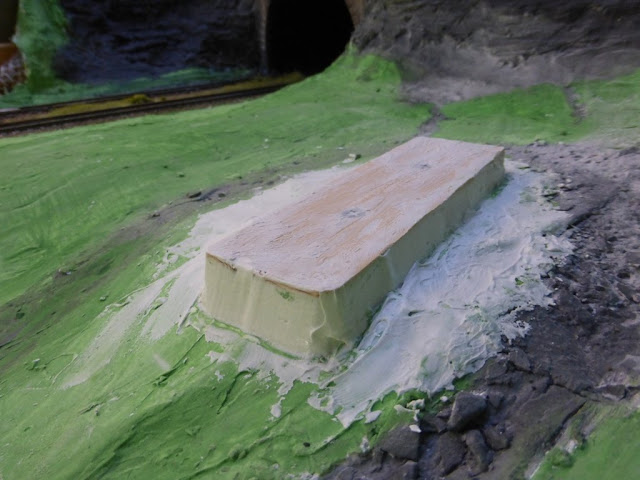 The bridges I am using are second hand and not quit straight and true so I have to continually check how they will fit. 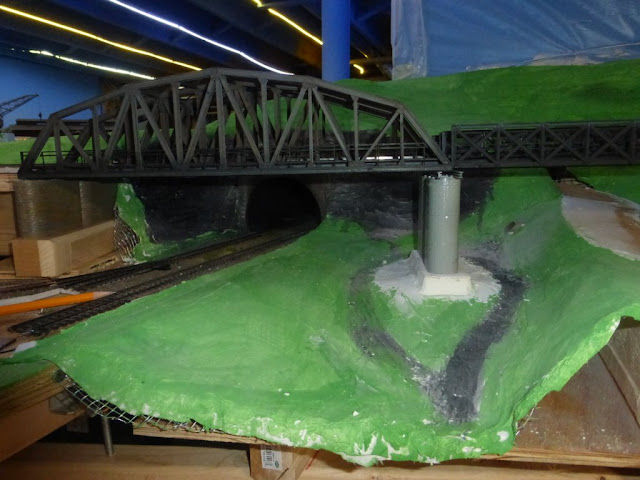 I have decided to make final height adjustments with small shims between the supports and the underside of the bridge pieces. 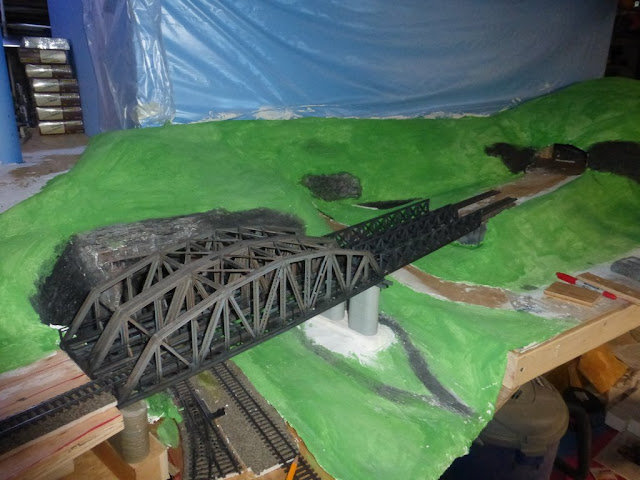 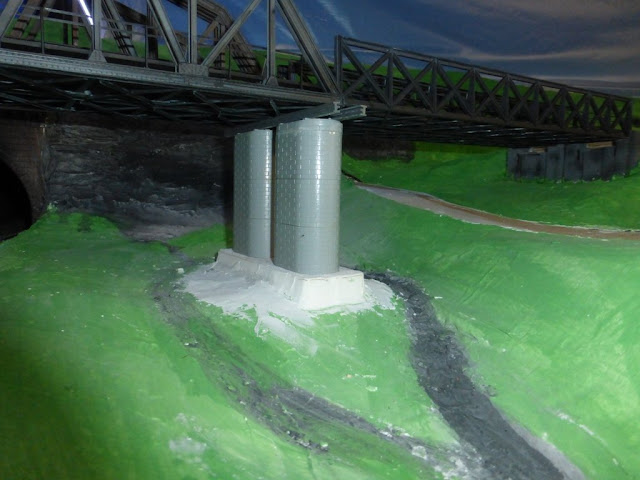 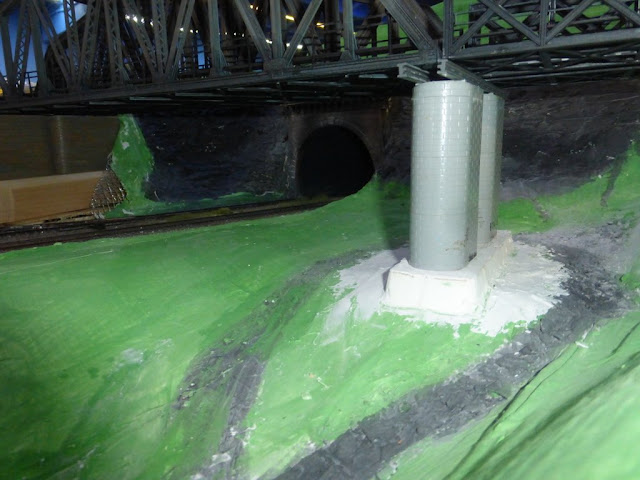