I have noticed on a number of on-line sites that people often wisely upload their track layout design for feedback. I have also noticed that many of the layout designs include tracks that have numerous bends in them. S-shaped bends are not good for two reasons:

a) model trains generally do not work well through S-bends. Buffers get hooked on each others, couplings come apart, etc.
b) models running through such curves do not 'look right'. This is because in real life, train tracks seldom go along wavy lines. Train tracks go as straight as possible. Only in mountainous situations where constructing straight tracks involve massive expenses of building bridges and tunnels would curves be common.

I decided it may be useful to create a page showing the alternative to the very common design error, so here it is.

Here is the type of design one often sees, bringing a mainline track into a station and splitting each track into two or more sidings: 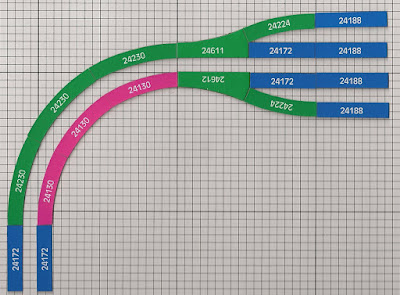 Notice how both tracks turn both right and left to get into or out of the outer sidings. This is an S-bend and will look poor.

Here is the approach I recommend instead: 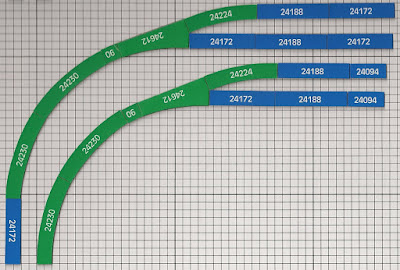 Items to note:
If one is constructing stations or fiddle yards with more than two tracks, simply keep adding additional turnouts along the straight line, like this: