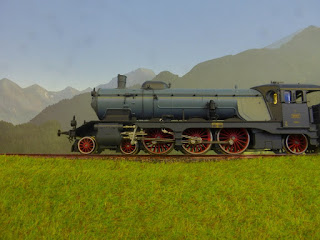 I was running my Märklin 3511 „Schöne Württembergerin“ (which has done just over 600 scale km) and it was running beautifully as ever.

I left it overnight in the hope that the decoder would reset itself after some hours without power, and tried again in the morning. Nope, still only backwards motion.

I took it off the layout and placed it on the treadmill and fed it some analog AC, still it only went backwards. I removed the coal from the tender to expose the electronics and found a black mark on the circuit board. 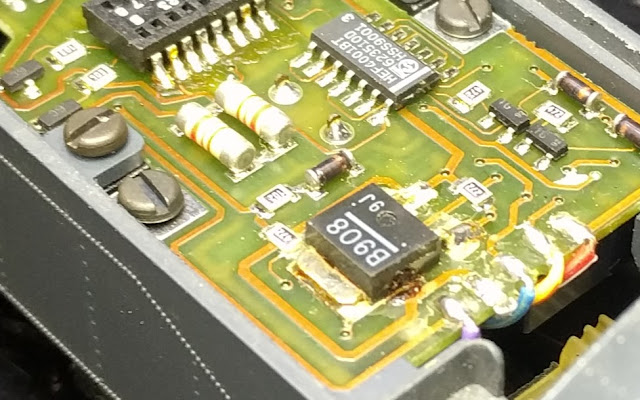 It did not seem to be a burn mark that is typical of a burnt out component, so I carefully cleaned it off with a small screwdriver. I tested the loco on the layout again but got the same result.

I considered running the loco backwards, pulling the train in reverse, but this loco does not have a coupling on the front, so that was not a solution. I then decided that I would try to reverse the motor leads so that the loco at least moves forwards and can pull its train around the layout. I needed to know which wires were delivering power to the motor so I took it back to the workbench and got out my voltmeter. I connected it to the layout digital power and turned it on.

It went forwards! I stared at the wheels confirming that the wheels were in fact going forwards. I reversed it and they went backwards too. Forwards again - all working fine. It is an intermittent hardware problem.

So I then abandoned rewiring things and took it back to the layout, and tested it again, I was able to drive it forwards and then suddenly it was back to reverse only again. Very frustrating!

I kept changing direction until it went back into forwards mode, and then returned it to its rake of passenger coaches. I will try and remember not to throw it into reverse, and see if it behaves itself.

If not, I will remove the circuit board and look for gunk on the other side too, and possibly replace the special decoder. I will also look on the underside for any bad connections. I suspect it is not just a matter of a loose connection though, since a loose connection would more likely result in it not moving at all rather than moving in the wrong direction. It is as if an internal 'relay' (transistor?) is failing.

I suspect the gunk I cleaned off is poop from a spider or small insect that has crawled up into the tender from below, and perhaps, there is more.
Email ThisBlogThis!Share to TwitterShare to FacebookShare to Pinterest
Labels: Digital, locomotives
Newer Post Older Post Home