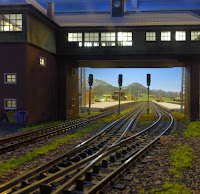 I have constructed my Faller "Ritter Stellwerk: 120124.  The model has nice big windows so that the signalmen can easily see out, and as a model, the observer can see inside. The kit contains some signal equipment, control panels, filing cabinet, tables and stools so that the inside can be decorated and arranged.


I found however that despite the fact that the model is geared up for interior details, Faller failed in a few respects:

A) The inside walls of the main room have no covering leaving the ugly, unfinished walls exposed. A paper clock was supplied to paste onto the wall. A small section of the interior wall had some wood paneling supplied so I cannot imagine why they did not supply the same paneling for all the walls.

B) There are no stairs for the workers to get up to the room nor escape their indefinite employment there.

I also had the Faller 120118 kit  for the interior of signal boxes. This kit contains the same parts as some of those from the 120124 kits plus some parts from other signal boxes. It also contained some nice office chairs, desk, telephones, lamps and a nice long set of the old mechanical signal and turnout levers.  So I decided to combine the two kits and the result can be seen below.

I also decided to make my own wood paneling for the interior and some fake stairs...

Here we have the 'Dienstleiter' at his desk. He is a pompous old a-hole who insists that the other workers also work with their jacket and caps on at all times. 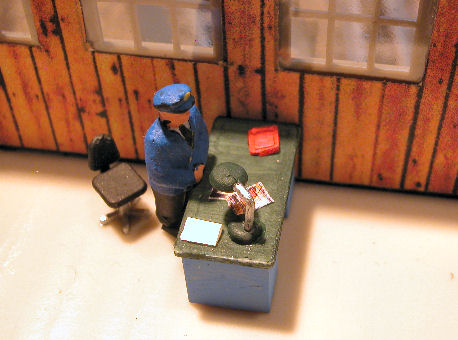 You can also see the paneling I made by scanning the section that came with the kit and printing it out in strips long enough for each wall. I then cut parts away for each window... 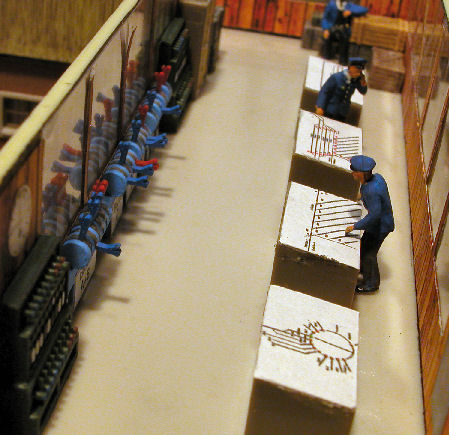 The kit also came with crude layout sections to glue onto the control panels but I decided it would be better if they showed my actual layout so I made my own version of those too... 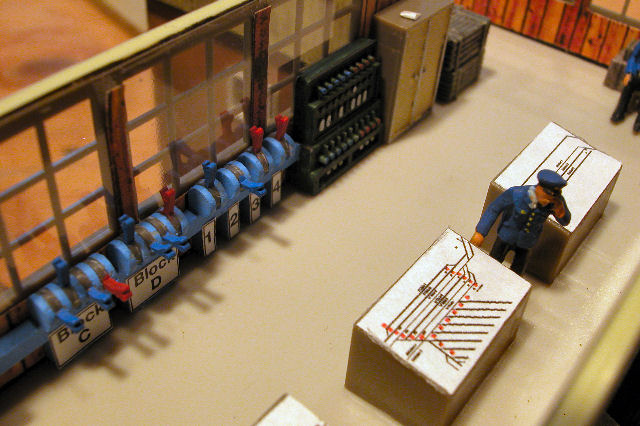 After looking at pictures of German signal boxes, I knew how to paint up the levers and locking systems. I think blue levers were used for turnouts and red for signals. 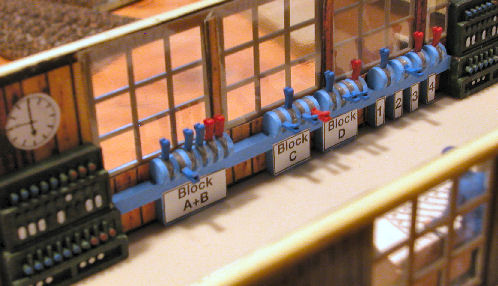 There are also a number of crates that have been brought in. They contain the new computer equipment that will be replacing the old system.. 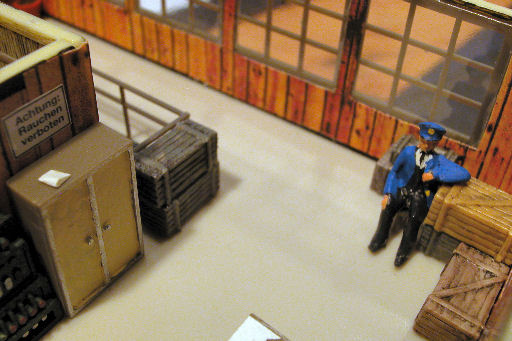 To make the fake stairs, I simply placed some plastic stairs on my flat-bed scanner and scanned the stairs, and printed them out. I then glued them onto the floor and placed a railing next to it. I hid one end a bit with some crates. 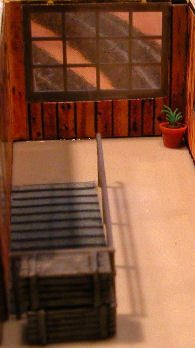 I also thought it would be appropriate if one of the control panels resembled the Intellibox that I use for controlling the layout... It looks like the biggest Intellibox in the world... 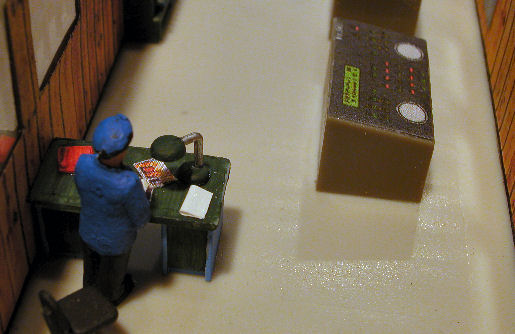 The walls are finished off with some Bundesbahn posters, duty roster, clocks, etc.

See the signalbox lighting page for how lighting was installed.