It took an entire weekend to make and install the interior lighting in my signal box!  Much of the time went into cutting the Plexiglas that we used for the ceiling light in the main signal box area.

The model is the Faller kit 120124 into which I installed numerous interior details. 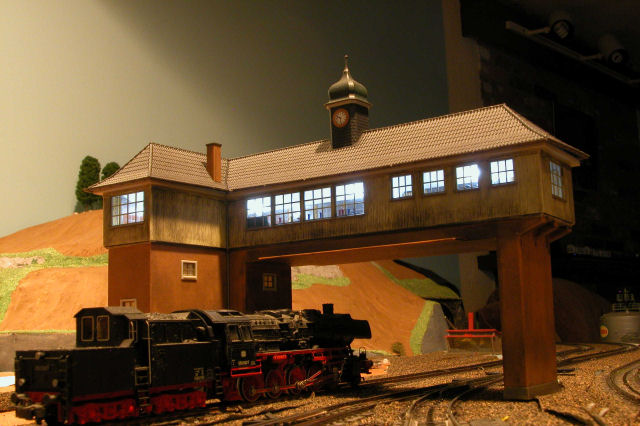 The first job was to construct some contacts so that the roof could be removed yet still deliver power to lights mounted in it when replaced. I glued some copper contacts (from an old Märklin track switch) onto the wall in the corner of the room such that they make contact with the ceiling when the roof is in place. 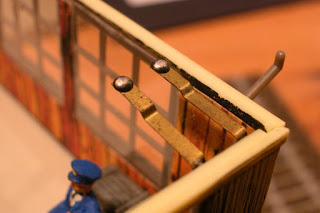 The copper color blends in so well with the wooden paneling I decided not to paint the contacts at all... 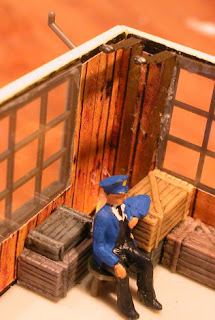 On the underside of the ceiling I glued two pieces of copper shim such that they are aligned with the contacts. 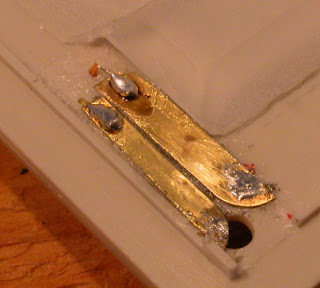 The hole visible in the corner is where Faller intends one to run the wires for the ceiling lighting. I drilled tiny holes for the wires - visible at top left.

I decided to use Plexiglas to distribute light along the length of the room to simulate fluorescent lighting. I had been given a sheet of 6mm clear Plexiglas but I had never worked with the stuff. Various web pages suggested that special drill bits and specific cutting blades are needed to cut it without it shattering. My son and I, being somewhat afraid of using the table saw to produce thousands of sharp bits of Plexiglas shrapnel, opted to try the jig-saw method of cutting. We selected the finest toothed blade we had and started cutting. What a mess, the Plexiglas melts and fuses together behind the blade. Read the web pages again - and decided to also follow the suggestions to cool the material during the cutting process. We opted for water and indeed that stopped the melting but results were still terrible. The jig-saw blade insisted on taking its own path through the material despite the fact that I had clamped the sheet under a guide for the jig-saw. Sometimes, cutting would stop and it required a lot of force to move forward again.

Since we did not experience any shattering with the jig-saw and were getting nowhere we decided to give the table saw a go. We started by cutting a 1" strip and my son sprayed the material with water as I cut. It worked well and made a nice clean cut!  Then we did some drilling tests - making some test holes for the LEDs - also with good results.

Now, clear Plexiglas emits light from the edges, and since we wanted the strip to emit light like a fluorescent fixture, we decided to maximize the edge area by cutting the sides at 45°. We did that, creating two pieces to fit into the L-shaped room that fitted together to look like one large fixture. I also sanded them to make them diffuse the lights more. We drilled four 3mm diameter holes in the top, not all the way through, for the LEDs to fit into. Here one can see the Plexiglas pieces glued onto the ceiling.... 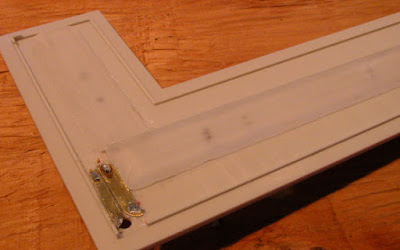 Since the LEDs emit most of their light from the top, I painted the tips with silver paint in the hope that more light will come out of the side of the LED package. I also sanded the LED packages with fine water paper to make them more diffuse.

The top side of the ceiling simply has the 4 LEDs wired in series.....

In addition to the four LED lights in the roof, there is also one LED in the lower part of the building. I colored the lower light with some orange acrylic to provide an incandescent color temperature.

I started off with all five LEDs in series, a circuit that would normally not need a resistor since the white LEDs drop the voltage substantially. After getting it all working, I glued the electronics module into the base and tried it again - nothing worked. Then I noticed that the top four were in fact glowing very dimly. I suspect that I must have shorted out the contacts when replacing the roof, something pretty easy to do given their very close proximity. If the roof LEDs are shorted it means that all the current goes through the downstairs LED and that is too much for one LED, so it burnt out. I therefore split the current into two circuits, one for the single downstairs LED with its own resistor and the other for the roof LEDs with a small (47 Ohm) resistor now that there are only four in the circuit. Since I want the system to be able to survive a short circuit, I looked for a 47 Ohm resistor with a very high current rating. I found a huge one that probably has a 5 or 10 W rating. It seems to handle a short because I tested the system by shorting out the contacts on purpose. Thanks to Bill for help here!

Even though the ground landscaping is not yet done, I wanted to see how it would look in place so I have wired it into place, I will most likely disconnect it when I get to do the local landscaping, and reconnect it again when done.

It is difficult to capture the different light color temperatures in an image... 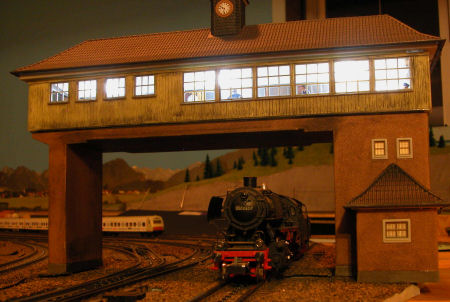 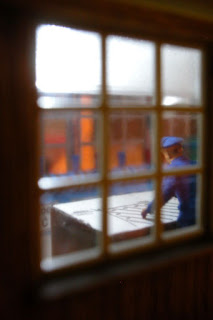 A view through a window where one can see a signalman working the control desk... 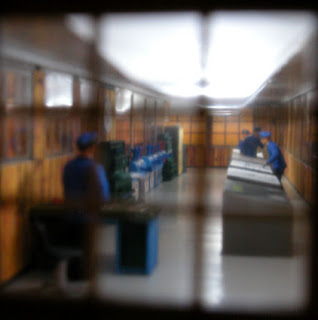 A view through the end window looking down the signal room. 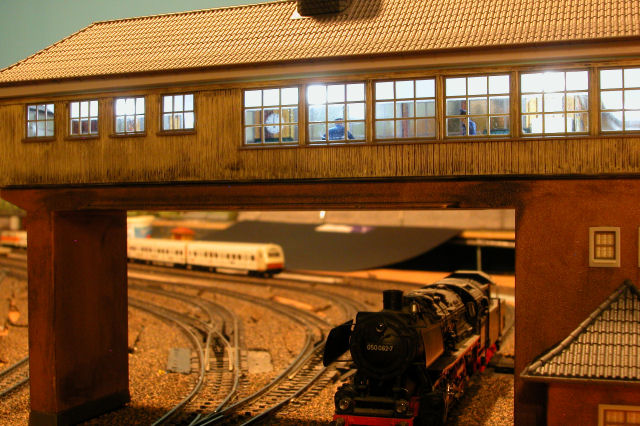 And an oldtime sepia image... 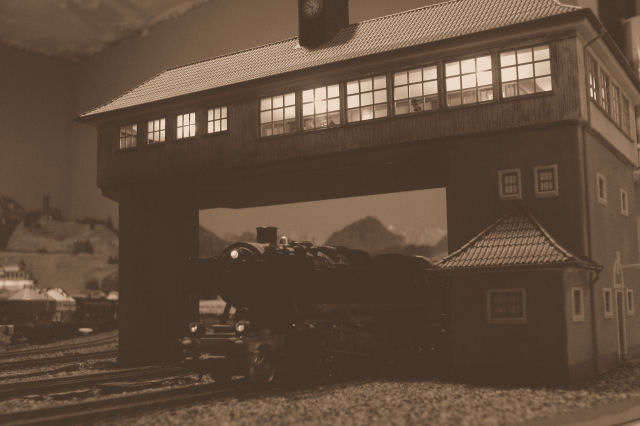 The signal box now lives at the end of the main tracks of the main station on my new layout! 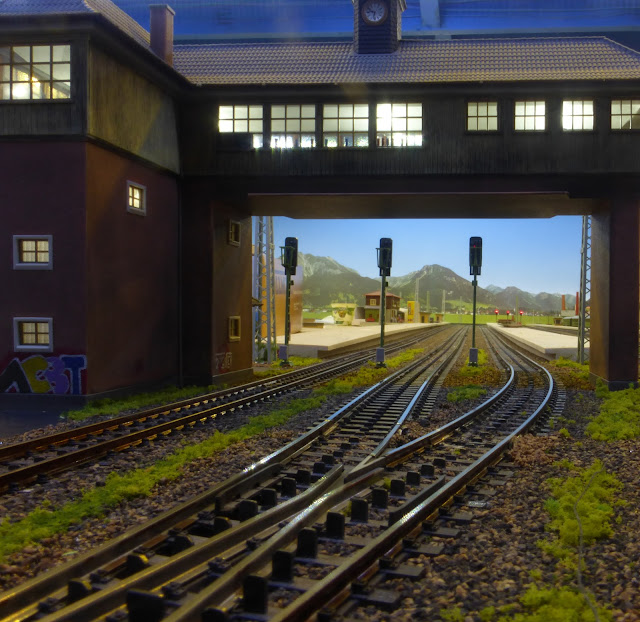