This is a small kit (20.7cm x 8 cm) that consists of two coal bunkers and a small raised crane for lifting the 3 small coal skips that are also included. 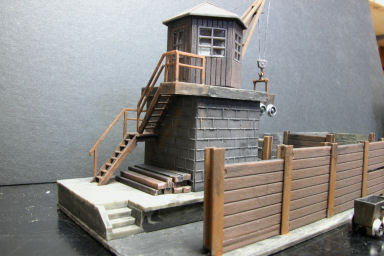 This does not seem to meet the normal Faller standards.

The door of the crane house is too large to fit in the door frame. The instructions and box illustration show the door ajar - that is because it does not fit. If the door was the right size customers could have it closed or open as desired. I sanded my door down to size so that it would fit in the door frame.

It seems that there was some sort of idea to somehow motorize the rotation of the crane - there is a drive shaft with a half round male drive connector at the bottom and also a small adaptor piece that converts the end into a female half section drive shaft. The adaptor piece is not referred to in the instructions at all. The instructions indicate that the crane foundation should not be glued down - presumably so that one can access the mechanism for rotating the crane.  This is no big deal - just seems strange. Update: I have been informed that there used to be a Faller item 635 that would rotate the cab by means of an electromagnet. The unit fits into the base.

The railing for the stairs going up to the crane are really bad. It seems they were designed by an intern on their first day - and then never tested. First, each railing is extremely fragile and there are way too many connections to the sprue. I counted twelve points where the railing had to be separated from the sprue or other molding plastic!  The first railing broke as it was being removed from the sprue. (I take great care removing pieces, even cutting in an order to minimize stress on the part.) When tackling the second railing I used extreme caution and despite my utmost care it also broke. Faller has numerous railings in other kits and they are much better than these. Second, the railings do not fit into the holes in the wall that are provided to anchor the railing to the wall.

The bearing of the crane is too sloppy - the result is that the whole crane cab leans towards the side of the boom. A small ridge under the crane cab for support would resolve that problem. (I suspect that when attached to the motor 635 the cab would be held vertical and it would not lean over.)

The attachment of the boom to the crane cab is poorly engineered. There are simply four flat areas on the side of the cab onto which the boom must be glued. Small lugs on the ends of the boom that fit into 4 holes in the cab wall would provide a much better method of attachment.

The instructions do not indicate to glue in the window foil which is supplied. No big deal but a trap for a beginner.

On a positive note the detailing on the concrete bunker walls is very realistic looking.

I had some N gauge rail that is very similar in size to the rails that are molded into the base plate so I decided to use that so that I could extend the rails beyond the actual bunker. The flanged wheel axles of the coal skips were just a bit smaller than the N gauge track!  If they had made them just a bit bigger then customers could easily utilize some N gauge track. I went and bought some small diameter plastic N Gauge axles and used those instead of the one supplied in the kit. I also ground off their rails from the base plate.

I have also used a lot of black and rust paint to weather the kit. 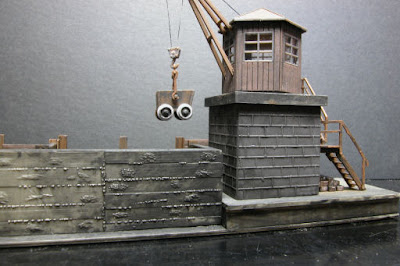 The skip wheels need some more paint to tone down the silver color. 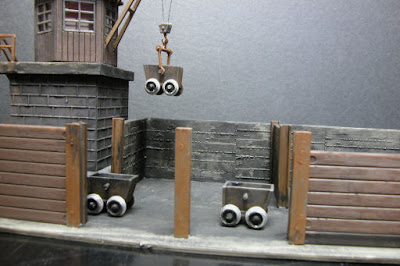 As mentioned I will use some N scale track to extend the rail beyond the bunker. Here is a look at how it will look.. (track still needs to be weathered of course) 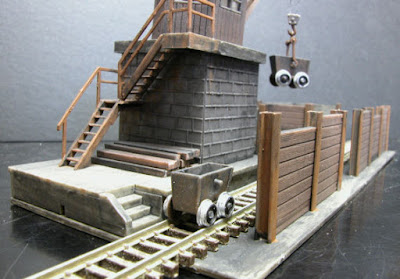