I have some K-track turnout lantern sets and I decided to install some today. 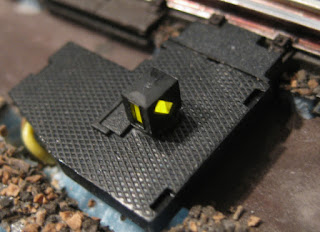 The lantern sets are advertised to be maintenance free since they use LED for lighting. They are designed to take AC power.

Each lantern comprises a rectangular box on which the various aspects of  the signal Wn1 Wn2  and Wn2b which indicate the status of the turnout (straight, curved, and curved from the 'other' side).  Each lantern is designed to clip into the side of the turnout and has a plastic tongue that engages with the mechanism which is driven my the switch motor form the other side of the turnout.

Each kit comes with two lanterns and each also has a small plastic spacer to be used if there is ballast under the track. Tiny screws are also provided to hold the spacer down.

Here one can see Wn2 displayed indicating that the turnout is set to curve left... 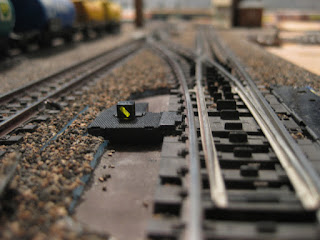 I have not yet completed the landscaping (ballast) in this area at all. When I do that I will most likely also weather  the metal plate on which the lantern is mounted - rusty.

I opened one up to see how they handle AC current for LED lighting since LEDs typically demand DC and only one polarity. 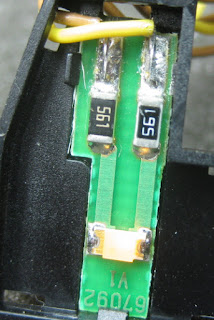 They look OK but I find that they do represent a significant mechanical load to the already weak mechanism. One has to install them very carefully to minimize any friction in the mechanism.

The LED light is a very warm yellow. I would have preferred a whiter color.

The lantern does not always turn a full 90° - I suspect small amount of play in the mechanism translates into some missing rotation.