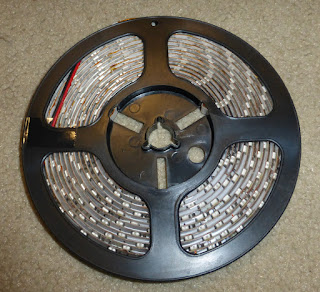 In the time since I prepared the room for my previous layout, LED technology has advanced tremendously. I found however that LED light fittings were rather expensive if one wanted to cover 450 square feet so I looked for an alternative.....

I found that one can now buy a roll of LED strip lights 5m (16') long and I tried some out, liked the result and then formed a plan to illuminate the layout area with dimmable LED strips.


This is what I ordered

I did some experiments trying the lights between the joists in the ceiling but this position resulted in a nasty looking set of shadows on the blue sky backdrop, so I decided to mount each strip on the underside of the joists.

I decided to run lighting on every other joist,  needing 5 runs across the room.  The room is 32' in length so two strips were needed for each run.

Each strip draws about 1 Amp of current at 12 Volts DC. I soon realized that I was going to need a lot of power to run 10 of them and I found a 30A power supply which looked ideal.  (I intend running some additional lights behind the mountain backdrops and also in hidden areas so I will probably need 18A in all.)

I had a roll of 16 AWG fire alarm wire that Debbie picked up for free at the dump and calculated that 16 gauge wire would be enough for each run. I therefore ran 5 circuits of the fire alarm wire from the center of the room on each joist down to a new power socket that is switched by the room lighting switch. At that location, I mounted the 12V power supply and three fuse holders. I upgraded the wires in the fuse holder to 16 gauge. 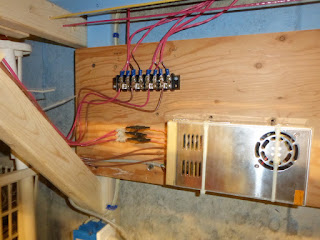 I decided to make three dimmable circuits plus a fourth one that was not dimmed. The 4 circuits are as follows:

Circuits C and D share a fuse A and B each have their own.

By alternating the color temperature of the ceiling lights between cool white and warm white I will be able to vary the warmth of the light in the room. So, for example, I could turn the cool white strips off and use just the warm white ones for a dawn or dusk effect, or turn everything on for a sunny day or just a low level cool white for a moonlit evening.

I mounted three dimmer and a switch on a panel that is attached on the side of the layout:

This is how I mounted the strips....

I have a set of speaker connectors for that supply 12V DC and also the digital track signal, so it is very easy to test. 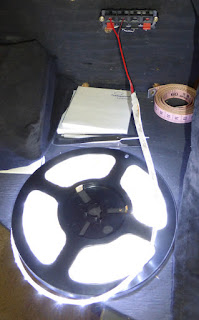 2. I attach a cable tie around the LED strip 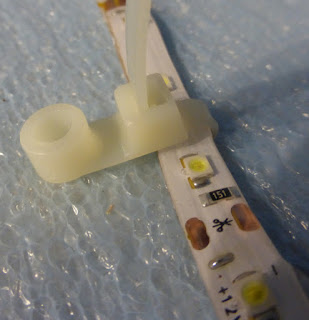 3. Screw the cable tie into the underside of the joist 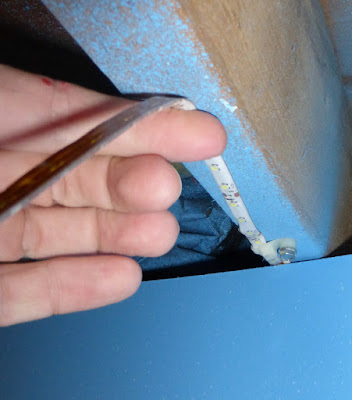 ( I switched to using 1¼" drywall screws as they stay on the screw driver better.)

4. Peel the backing off the sticky backing and press the strip onto the underside of the joist. (The sticky backings of these strips are not reliable at all. I regard them to be installation aids only, holding things in place for a few seconds until proper mounting can be made - cable ties.)

5. Add another cable tie about every 30 inches. 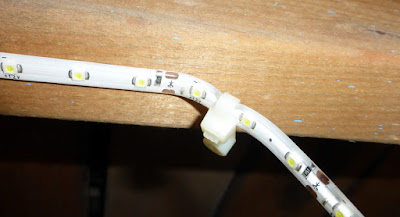 6. In the center of the room, where my fire alarm supply wire is, I would connect the red and black wires together using Scotchlok UR connectors. The two strips are thus fed from the same central location. 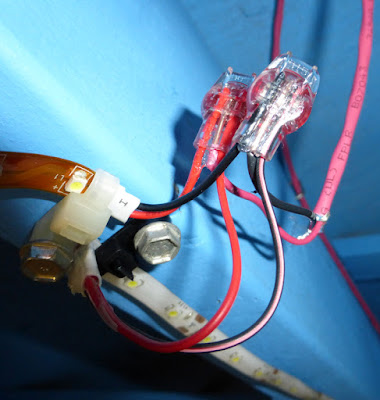 Here is the final result with all the strips on 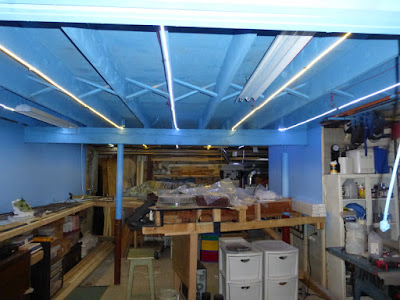 and just the cool whites 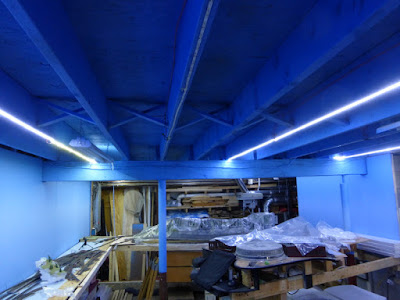 All the ceiling lights draw 10 Amps together. At 12V that is 120 Watts. The conversion from 120V AC to 12V DC is only about 50% efficient though so the whole system is using about 240 Watts to light the room.