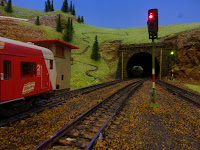 A demonstration of how signals and their distance signals are set in my model train layout software. German colour light type signals are used to represent the signals on screen.

Two routes are defined along the track and they are chained together. Initially a train (indicated by blue) is at the far left track. Track is then booked along the first route, and since there are no obstructions, also the second route is seamlessly booked, thus booking the track along all the tracks.

The main signal goes to aspect one, (green) and the train starts off. As the train reaches each main signal, the signal goes to aspect zero (red) and also sets the signal two tracks further along to come off aspect zero. As this happens the distance signals also indicate the new signal aspects. Towards the end of the trip, the main signals also use aspect 2 (slow) and this is also reflected in the respective distance signals.

As the train progresses, track behind it is released.


This video shows my train control software handling both these cases. It uses German colour light signal rules, in which a distant signal on the same pole as a main signal goes dark (off) if the aspect of the main signal is zero (stop).

A blue train travels past a main signal with a distant signal which reflects the aspect of the next main signal on the middle track on the right.

Then an orange train comes from another track and passes a different distance signal that also reflects the aspect of the same main signal that the blue train used. Two distant signals working with a single main signal.