The Busch backdrop is rather unique in that it is two sided. In addition to the front which depicts the facade of a row of residential houses in a large city, the back is printed with dark ink leaving some of the windows and all the street lights 'clear' so that light can shine through for night scenes. On the right hand end is a field and a boulevard with trees going down to a large church. It is designed to transition from an urban area to farmland. The left end is designed to join onto the Busch HO 2877 product - additional urban buildings.

It is a great concept but there are unfortunately a number of problems in the production.

The fundamental concept is spoilt by poor printing, the rear printing is about 3 or 4mm offset from the front, so all the masking of the windows is out by a few mm. There is simply no excuse for this.

Light shines through the wall despite the 'special' black ink. 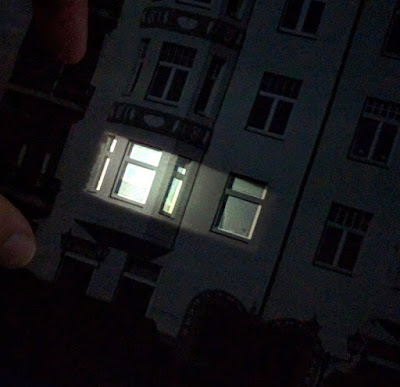 The creation of the images displays some very amateurish 'photoshopping' skills. One building is duplicated and then reversed, but the artist did not even bother to remove shadows of railing from the next-door house and even crop the edge of the building properly before inserting it between two others. This reversed image of one of the building does not even appear on the picture of the backdrop on the box suggesting it was added at the last minute. 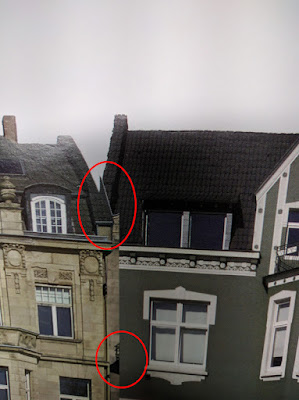 Another house seems to have had a green color 'fill' added to the front so it is lacking all texture that one would find on a building.

One of the windows that is left unmasked, straddles the overlap between the two pieces of paper, making it unlikely to be mounted properly without having half the window half masked unless the customer takes extra precautions by cutting something.

There is no suggestion on how to mount this so that lighting can be placed behind it. Clearly one cannot simply have paper hanging by itself because the slight bump would poke a hole through it, nor would it  hang flat.

So generally I feel that a great concept was failed by very poor implementation.

For my installation of backdrops I actually cut the sky off, because I have painted the sky onto my wall all the way up to the ceiling. The installation of this product was thus even more troublesome because I now had to construct a custom shaped 'light box' for the rear of the backdrop to hold the lighting. You can read and view numerous images of my installation at http://cabin-layout.blogspot.com/2016/09/illuminated-street.html