This page is an attempt to provide some tips on taking decent photographs of your train layout. Some of the original text dates back to September 2006 and I have now updated it in places where the technology has changed.

Some people have asked how I produce such nice sharp images of my train layout so I thought I would describe the techniques that I use.

I used a digital camera, initially a Nikon Coolpix 5000 which produced 5 megapixel images. 5 MP is way more than what is needed for images for the web and I usually had to reduce the size and resolution before posting on my web pages. I then used a Canon PowerShot pocket camera for many years, and I now use my Android Nexus 6P phone!

Here is what is important.


Sadly, my phone camera does not allow aperture control. It does however have automatic HDR (High Dynamic range) which produces wonderful high resolution images. I typically have the camera in my pocket so it is very hand to pull out and use, especially when documenting progress, etc.

I have a very bright LED light on its own tripod. I have taken some pictures with it as the sole light source which produces realistic shadows. 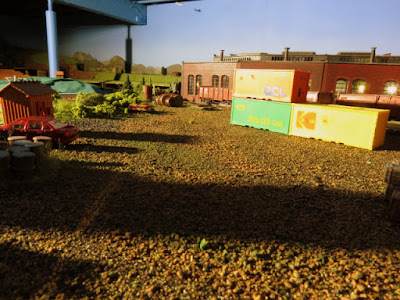 If using a phone camera, you may not have aperture control so you can skip this section.

Small apertures however reduce the light getting through the lens, so in order to get enough light we need as much light as possible or we increase the duration of the exposure, or both.  Once you have maximized the amount of light using reasonable means, such as room lighting or positioning an additional light in place, the rest is done by long exposures.

Since we need fairly long time exposures, we have to ensure that the camera is still during the exposure. This rules out hand holding. You could use a tripod, but that limits you to scenes near the edge of the layout. You can also get very small tripods that can be placed on the layout as well but this is not very practical.  What is practical is a very small beanbag and or a couple of small wedges that can be placed under the camera in order to direct the lens in whatever direction you need. This is where a viewfinder that can swivel comes in handy.

Positioning the camera right inside or on the layout produces a point of view that closely matches what a person on the landscape would see. The closer you can get the center of the lens to the ground the better. This is how we see a loco: 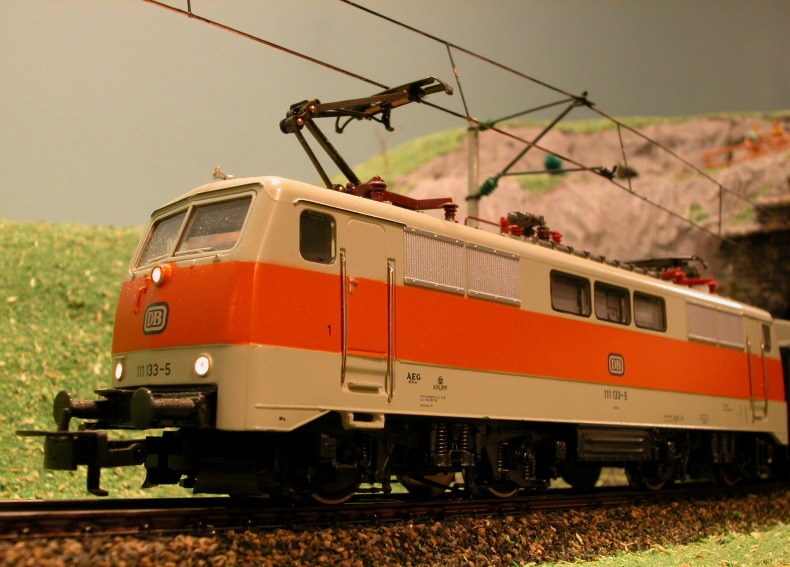 Try to include some human interest... like these hikers watching the train... 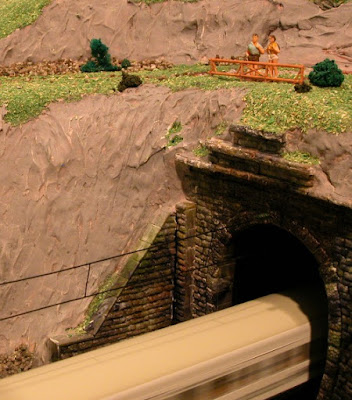 Place the camera on the layout. You may be limited to space on the tracks (take care the camera does not short out the tracks if the layout has to be powered up) or on a road or in a field.


By using the self timer, you reduce the vibration and movement of the camera that results from your finger pressing the shutter release. It is even better than a mechanical remote shutter release. Some high end cameras have an infra red remote release which would also work well.

The exposure may take 20 or 30 seconds. It needs all that time to get enough light in through the small aperture.

The long exposure times make it very easy to simulate train movement. Once the exposure has started, simply move the train either by hand or with a locomotive. It does not have to move very fast or far...

First, not what to do...  taking a picture from a bird's eye view does not produce a view with which most of us are familiar.. 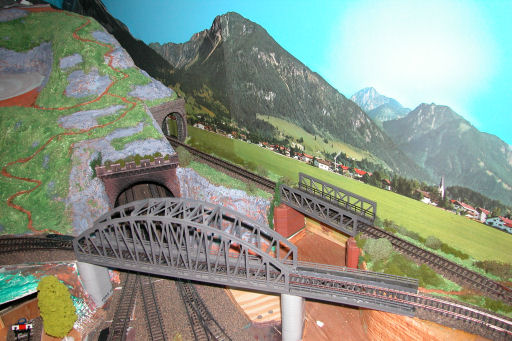 This looks unsettling for those of us who do not spend much time up in the air. Even a pilot may feel a little uneasy going down at this angle towards mountains. This type of shot is only good for documenting the progress or how to build the layout. By taking the camera down to the track level you get a much more natural image: 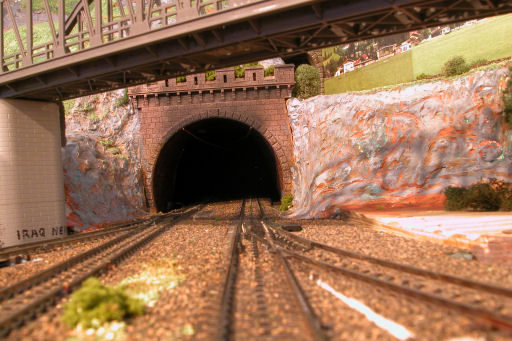 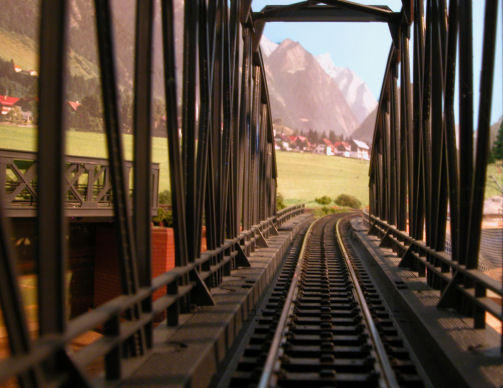 If you have a backdrop image, use it. 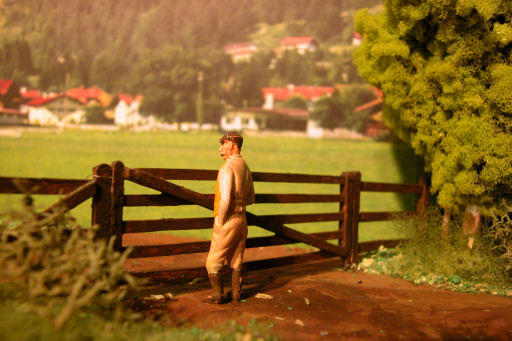 Don't be afraid to make even longer exposures for night scenes.

An example of movement 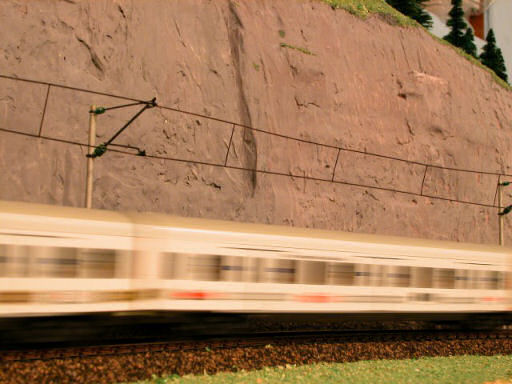