Positioning of the computer and control area

Over the years I have often seen a layout design discussed and thrashed out for an extended period, without any thought as to where the control area will be. Things like control areas and computer screen take up space and really need to be considered when designing the layout.

Whether you are using a simple digital controller (or a few), analog controllers, or a computer, the devices have to live somewhere. Walk-around hand held throttles are now commonplace, but serious layouts still need some sort of overall display of the tracks and where trains are. Station control desks (Stellpult in German) also need space and you don't want them sticking into the already small walkway.

It is good to have this area somewhat central to the layout room, or at least as close to the main action as possible. Being central, typically allows best and fastest access to the control desk. If you have parts of the layout that require 20 seconds to walk around to, you may need to have satellite controls, or hand held controllers too.

If using a computer, the biggest issue is the placement of the screen. The computer itself is easily stowed away under the layout and the keyboard and mouse are easily accommodated on a small drawer, but you don't want to have the screen obscuring the layout.

The screen issue can be solved in these ways:
The main thing is to consider it, when designing the benchwork and floor space.

I suggest making the control desk space generic. By this I mean you should be able to swap out the computer for another one. Try not to make a carpentry project out of mounting the monitor, as you may have to redo it when you have to replace the monitor. You might also use a laptop, so you need a shelf wide enough for the laptop and low enough for the screen to stay out of the way. The laptop itself can also be stowed away like a desktop CPU and have an external keyboard, monitor and mouse attached.

Here are some pictures of my control desk from my first layout. 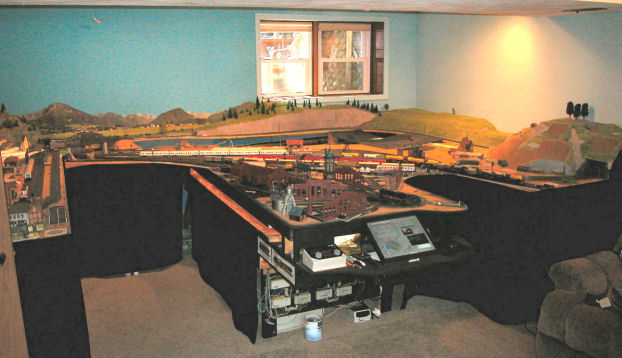 The computer itself is on the floor below the layout and it is connected to the LAN, Intellibox, a small flat screen monitor, keyboard and mouse. The monitor sits at an angle so that is does not obscure any of the layout. On the same shelf is the Intellibox and mouse.

Below the shelf is a keyboard drawer. The keyboard is not needed much when running trains so it slides underneath out of the way. 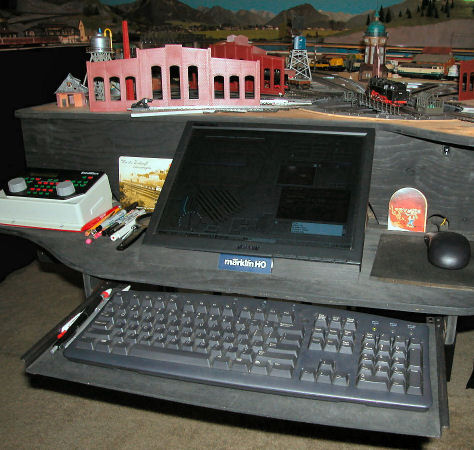 The location is central in the room.. and there is sufficient leg room so that one can sit at the computer. I like to have the monitor, keyboard and mouse all black, on black shelving to stay as unobtrusive as possible.

On my current layout, I have upgraded the small monitor for one that has a higher screen resolution. It is a bit larger but the top edge still does not obscure the foreground of the layout. One can see part of the array of s88 modules below the monitor and the larger monitor. 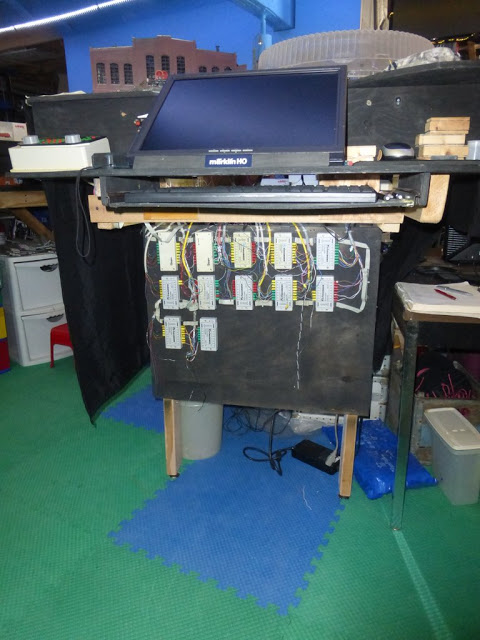 Here is an earlier attempt at positioning the computer and monitor (before the age of cheap flat screens!). The idea was that the cart could be wheeled out into the part of the room that was not designated 'layout space' when the layout was in use. I abandoned this when I found that the power supply was causing magnetic interference with the CRT monitor, and I was also worried about how all the cabling would handle the bending that came with the movement of the cart. 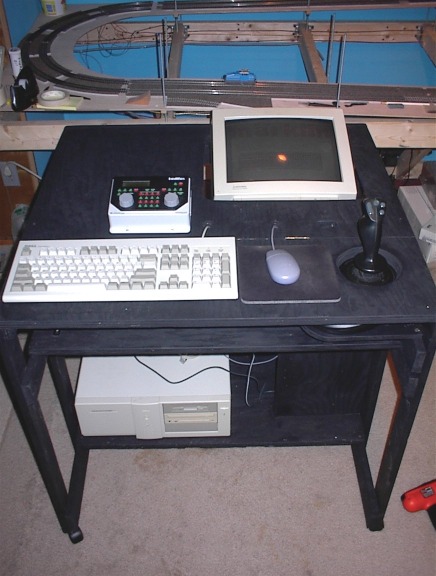 The shelf at the front was hinged 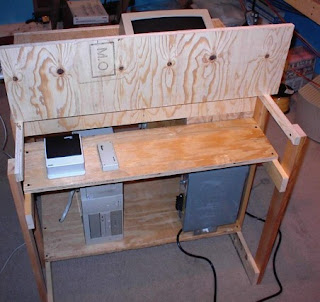 Here is another early tryout using a laptop. This laptop wasted too much space in the front, so I switched to an old desktop PC to run the layout. 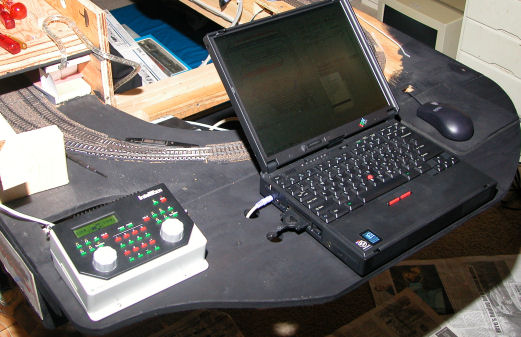