I am expanding the layout, even though I have not finished making the town, nor have I finished the vegetation along the mainline. I will try to explain myself....

I currently have eight long tracks for train storage in the shadow station. I have a bunch of trains in there, some of them are also pretty long, (472cm) which use up most of a track. Other tracks have up to three shorter trains parked, awaiting their turn to come out and run about.

The problem is that the layout is at its limit, a train can't run out unless it has somewhere to go, and if a friend wants to add a train of theirs, I find the system is choked, I have to find a place to park one of mine, so that there is room for theirs. I also have a bunch of locomotives that are in a display case, some still need decoders that need space on the layout. I also have some commuter trains such as the Primex Berlin S-Bahn train and a nice railbus that I would like to mix in with the more modern S-Bahn trains.

I also need a long track on which to perform maintenance on passenger trains that have been semi-permanently coupled. The maintenance track can also be used for adding and removing trains from the layout without holding up the mainline.

So, I decided I need some additional storage tracks for short trains. A scheme was hatched that would allow trains to depart the existing layout at two levels, each go through a fiddle yard of tracks and then go along the back wall of my basement to a common turning loop, and then return either to the original level, or the other level. The two levels of my existing layout have a height difference of 255mm, so the fiddle yards and the tracks going to the turning loop are going to be on an incline in order to traverse the height difference of the two levels.

Here is one of my concept track designs for the fiddle yards. The idea is to have two of these, one above the other, giving me about 20 new storage tracks!

The rear wall of my basement has been a lumber storage rack and I needed that space for the two fiddle yards. My friend Hein came to help me move the lumber away and we built a place under the layout to store the lumber. A freezer had to be moved into another storeroom to make space for the turning loop. Here is the main space. As can be seen there is a large drain pipe that has to be ignored. 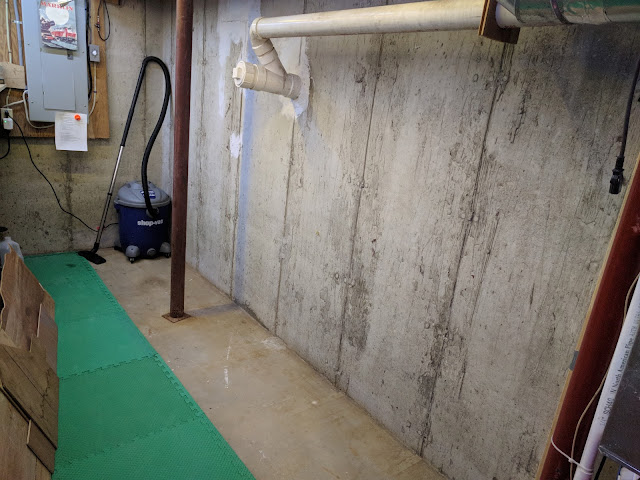 We took down the LED lighting strips so that they would not get covered in paint. Once we had all that done, we draped plastic over the existing layout, pulled up the floor mats, and masked off the whole area, ready for spray painting the wall blue to act as sky. Here is Hein taping the plastic to prevent overspray. 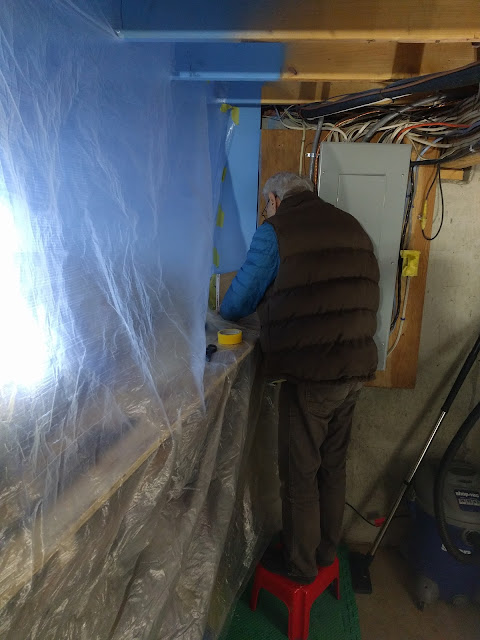 We then sprayed everything above track level blue, including the ceiling, all the cables, AC pipes and electrical distribution box. 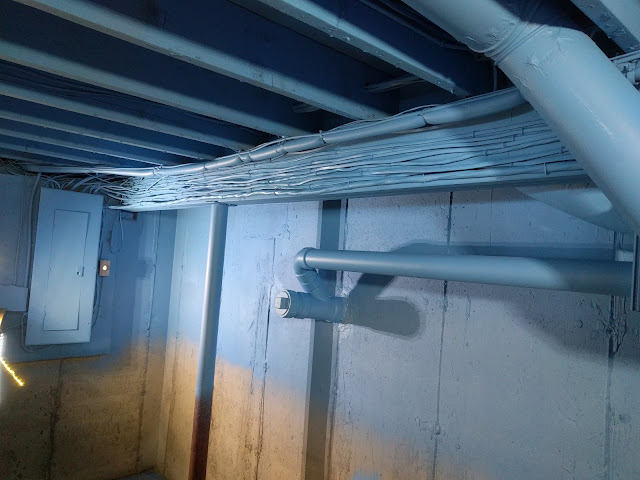 Here is a view from the layout side, with the LED strips still down. 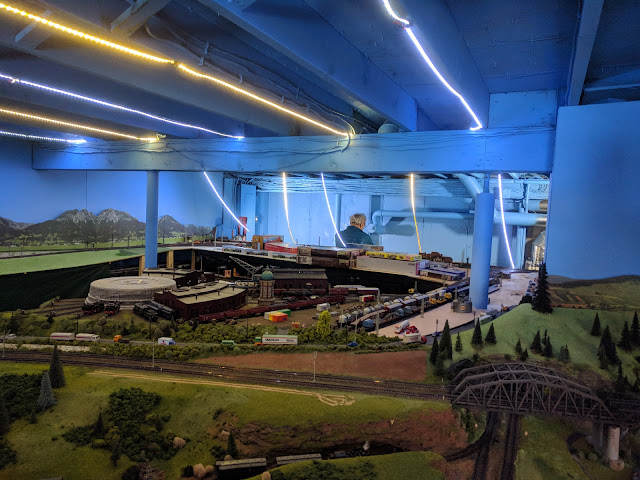 Of course, rough plans on the computer are only ever approximate (because houses are never square and measurements are approximate), so we could then start looking at the viability of my track plans, by laying track out on the floor. 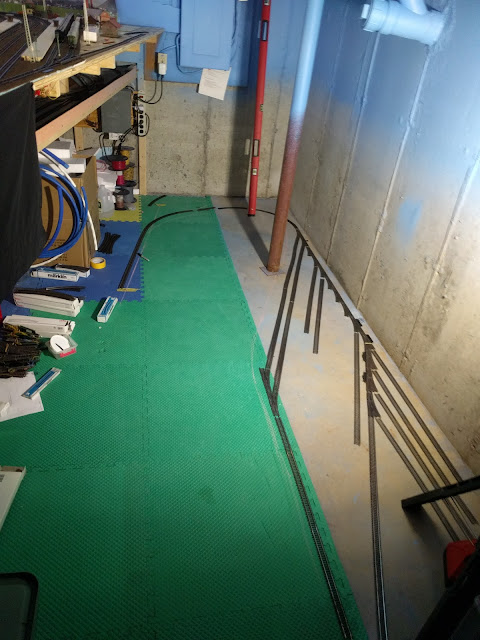 Once the trains get through a fiddle yard, they have to run past the air conditioning unit, and that presented a problem. The air filter slides out of the system at the track level, so I thought I would have to make a hinged, or lift-out section for two levels of track, in order to clean the air filter.

After much thought, I decided to convert the single large filter into two smaller ones, so that they can slide out below the lower level. I was able to find a filter kit that I was able to customise to be half-height, and I then also converted the old one to be smaller too. Now they both slide in, one above the other, and I don't have to build a lift-out section and worry about track alignment, etc. Here are the two filters in place, the red lines on the upper left are where the two track levels will be. They block the upper filter, but after removing the lower filter, I can drop the upper one down and slide it out too.

Once we saw that the fiddle yard looked ok, we decided to start constructing some benchwork using the lumber that was used for the old lumber rack. I still like using diagonal braces to the floor 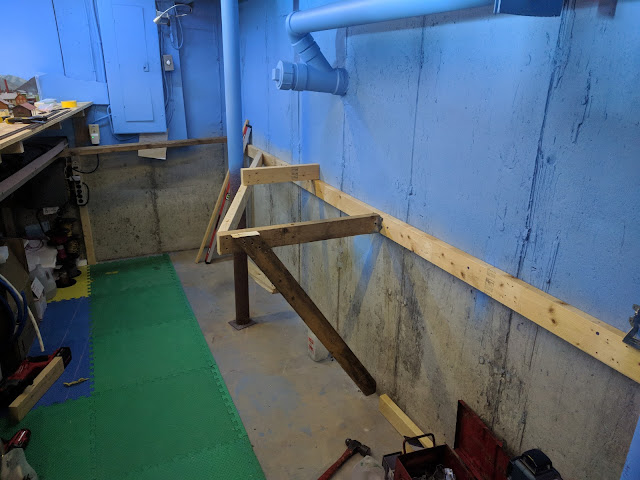 I then did some precise track slope calculations. I decided to make the upper fiddle yard have only a gentle slope (1%) as far as the AC filter, then increase the percentage to 2.05% in order to get to the lower level (255mm below) after travelling just over 11m. Transition areas from the existing layout and where the two levels meet will be 0.5%

Armed with the height data from my spreadsheet, I could now mark lines on the wall to show the layout height along the route. I used a laser line to show the upper layout level and I measured down from that. I could then preview where the upper level would be using the laser line: 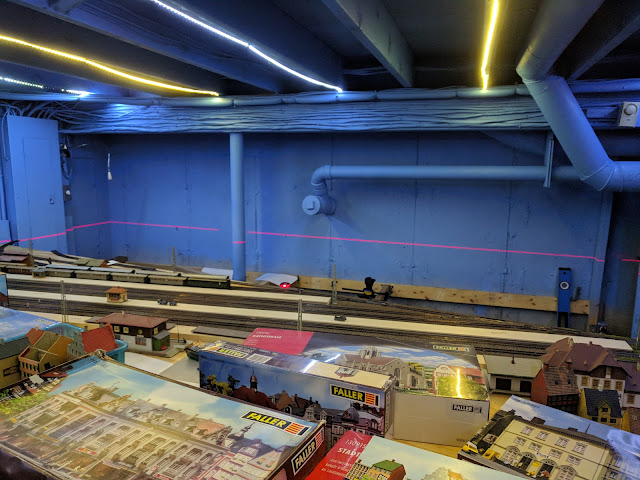 I decided that the slope would not be too bad (though it is really just a staging area, it is becoming a visible part of the layout), so I could proceed with adding risers that support the lower fiddle yard. Here you can see the red lines on the wall showing the two levels. The risers (with a piece of the plywood on top) were then clamped onto the bechwork so that the upper surface was at the height of the line on the wall, and screwed in place. 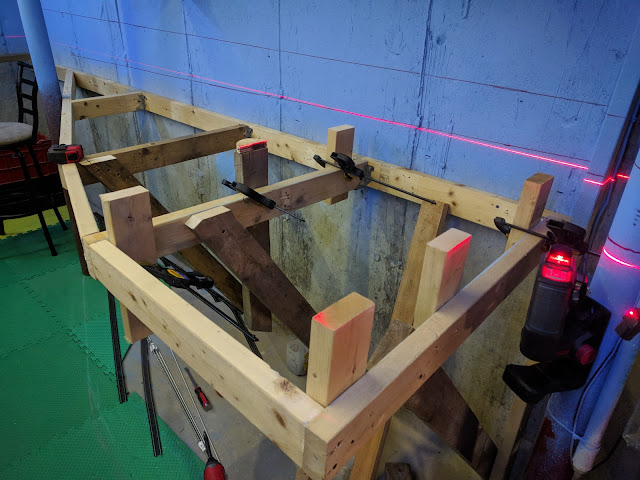 I then cut plywood to fit, and spread wood glue on it to hold down a layer of cork that Hein no longer needed. 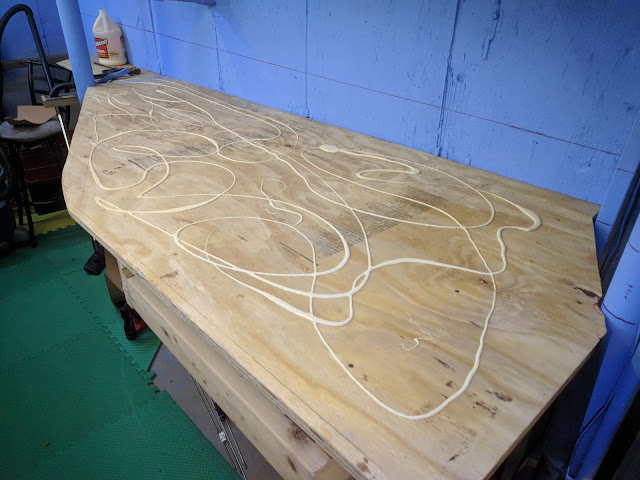 Once the cork was down I could start looking at precise positioning of the fiddleyard tracks on the lower level. I decided to make the tracks on the lower level slightly longer than the upper level, so that when they get as far as the AC they are horizontally separated. As their heights converge, they will be next to each other until they join before the turning loop. In addition, since there was room along the AC unit, I decided that one track from each fiddle yard would run the entire length of the fiddle yard and AC system, providing two very long sidings. 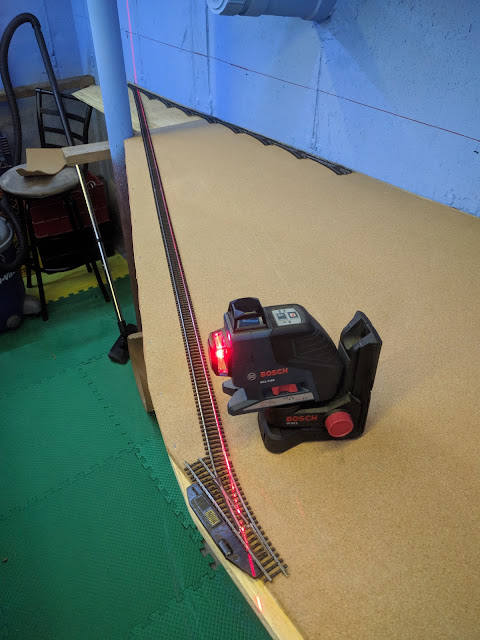 I also found that there is in fact room for 12 sidings, so I decided to make one less on the lower level and put that on on the upper level and add one more also to the top level, giving me 21 new staging tracks!

Why not 12 tracks on each level? Well, the cost of all the equipment is a major limiting factor as one can imagine. Each siding needs two turnouts, two turnout motors, two k83 type ports and at least 4 sensors. Short sidings will use 2x 2205 pieces of flextrack on the upper level and an extra 2206 straight track on the lower level. Fortunately Hein was able to buy a lot of turnouts and Viessmann 5211 modules for me at a train show in Holland, and I bought lots of used track at the Springfield train show. s88 type modules are just too expensive, so I plan on making my own sensors using RemoteSign modules.

Adding the long sidings as well as a long service track on the lower level of the existing layout means I need yet another box of 2205 flextracks! Anyone want to sponsor a siding and have it named after you???

Here is an approximation of the run past the AC system. The first two tracks will be coming up from the lower fiddle yard, and the rear two, sloping down from the upper fiddle yard. 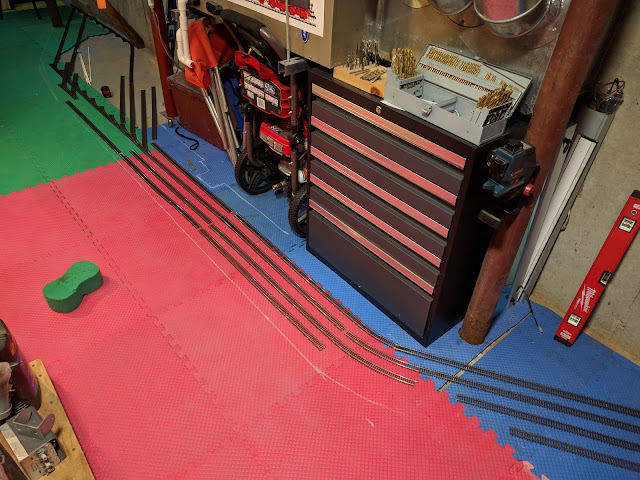 I have some backdrops that I got in an eBay auction some years ago and I plan on using them along the back wall and along the run in front of the AC system.

Here they converge, just before the far corner of the basement, which is where our water heater is. 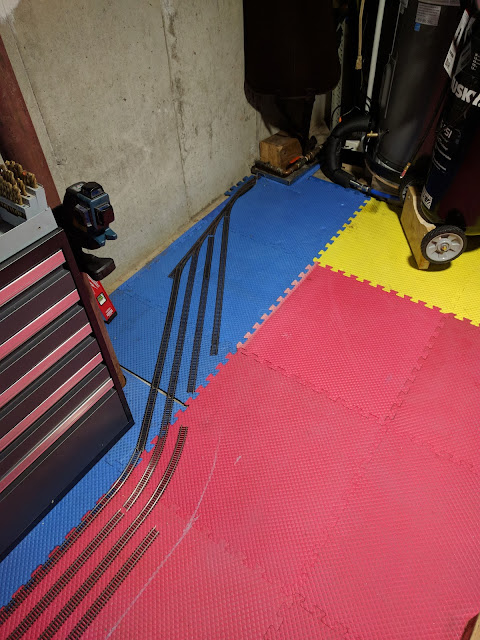 The track then splits and goes around behind the water heater to loop back onto itself. More benchwork to be built there too! 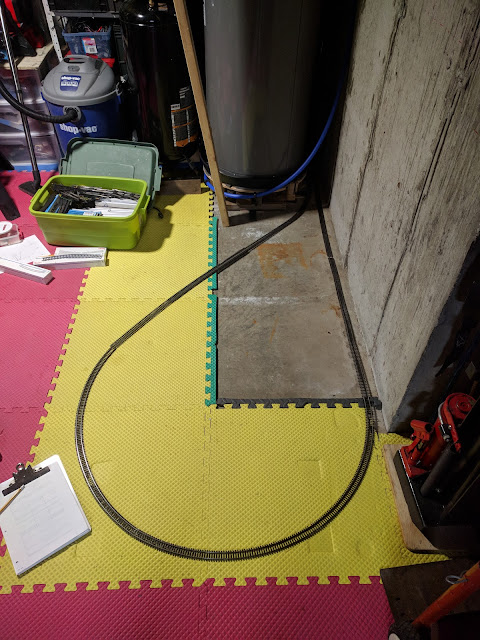 I have started preparing a rack of Viessmann turnout switch modules to drive all the turnouts in the two fiddle yards: 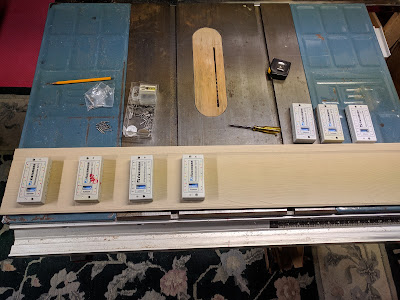 I have also added two turnouts to the upper and lower levels of the existing layout, and wired them up to k83s, here is my ICE 3 powered up on the new track at the main station: 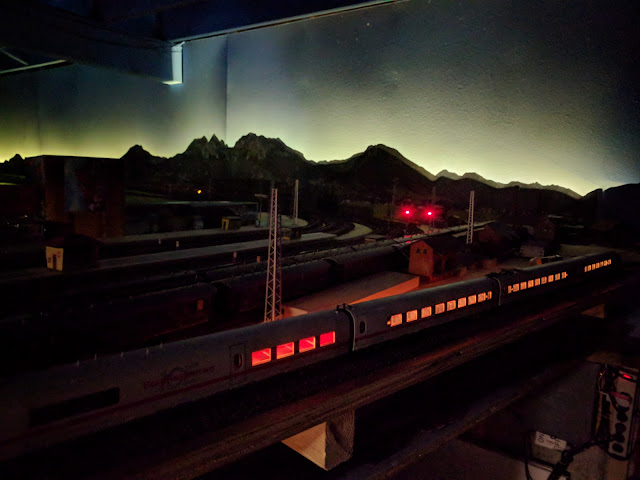