I was running a train one some newly laid track when the layout got shorted out. I have a 3A fast blow fuse protecting the booster and the fuse blew.

Close inspection showed that when the loco moved slowly, (along the straight part,) its pickup shoe would bridge the outer rail, and get the leading edge onto the studs on the far side, and then the rear end would drop down and land on the crossing running rail. This of course created a solid short circuit. Nasty. 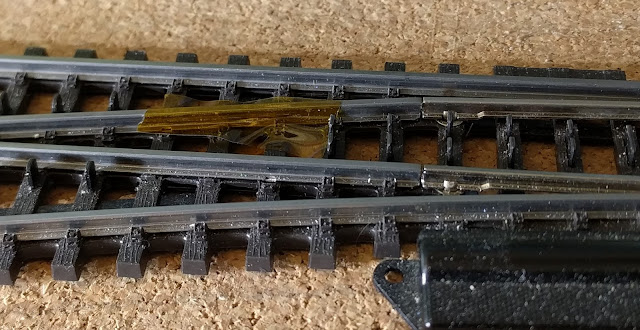 I decided to apply a short length of insulation where the running rail crosses the centerline of the straight track. I used some Kapton insulation tape which did the trick. It does not matter that the wheels will be insulated for a short length when running on the curved part, and since this is in a hidden area, I am not concerned by the visual aspect of the tape on the track.

Update:
The smarts and sharp eye of Ross Stewart picked up that the running rail had simply moved a bit and was touching the moving turnout blade. It just needed as little shove towards the fork! That rail is isolated from the other running rails so no insulation is needed so long as it does not touch the moving turnout blades!
Email ThisBlogThis!Share to TwitterShare to FacebookShare to Pinterest
Labels: tips, track
Newer Post Older Post Home