Seeing an illuminated model passenger train at night is a magical experience. Installing lights makes the trains seem more alive and presents a project within the building and operating of a layout. 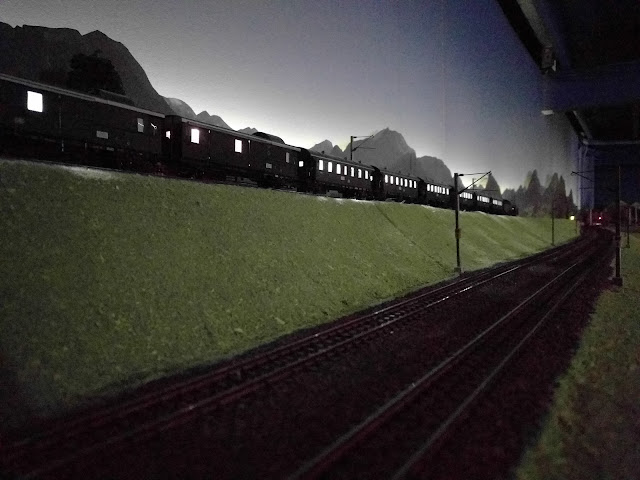 There are many, many ways to illuminate passenger coaches. Some methods are more expensive than others, some are easier to install than others and one can find advantages and disadvantages of every approach.

Each approach is a combination of a number of factors:

I have about 40 passenger cars that I wish to illuminate.
I decided to use the following approach for my first train:
The approach is very economical but of course the biggest problem with a whole train permanently wired together is how to service an entire train, getting it on and off the layout can be tricky. I have solved that problem with a whole train cradle (which will be the subject of another post).

I have now completed an entire train and I report the steps I used to add the lighting.
The circuit I used is described in a lot of detail in the page Modelling with LEDs, particularly in the section on lighting passenger cars.
The train I happened to pick turned out to be rather tricky because the design of the Märklin coaches does not make installation of any type of lighting very easy. The metal weight in the floor of the coaches is used to hold the close coupler guide mechanisms in place, as well as transmit current to the next coupler. The chassis, weight, both couplers, seats and body of the coaches all have to be assembled in a single step and it is rather tricky to get all six components to be properly aligned at the same time, and that is before we start adding wires and lights. Things did get a bit better once I had completed a few though.
The train I selected was made of the more modern models of the Donnerbüchsen such as item 4313, 4314 with goods wagon 4315.
The logical place to start is in the goods wagon as it has space for the rectifier and capacitor. The goods wagon already had some tail lights and a pickup shoe. I used a 2200uF capacitor and added an inrush resistor (1K Ohm), and a 1N4001 diode in parallel to the resistor.

To that I connected a DROK DC-DC converter that powers the strips in the train and the tail lights. I placed it opposite one of the sliding doors such that I can easily access the voltage adjustment screw through the door.  I added an additional resistor to the tail light circuit to reduce their brightness. 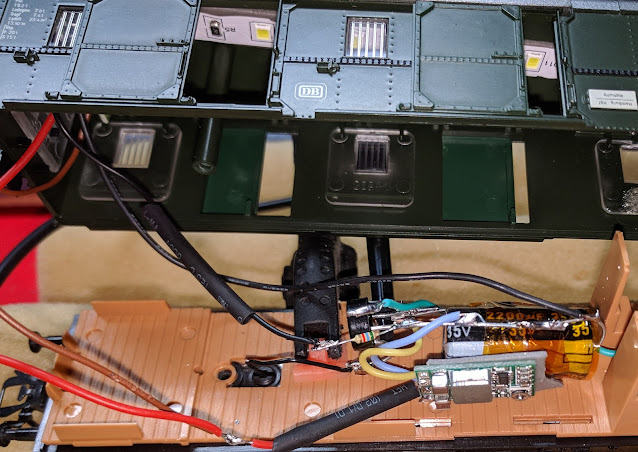 Since I was not going to use current conducting couplers, I needed to find where I could pass the wires into each coach. After checking the limits of the coupler mechanism movement, I decided to drill small holes next to the brake pads. For the passenger coaches the holes had to be drilled at a slight angle so that the hole comes up through the end seat. 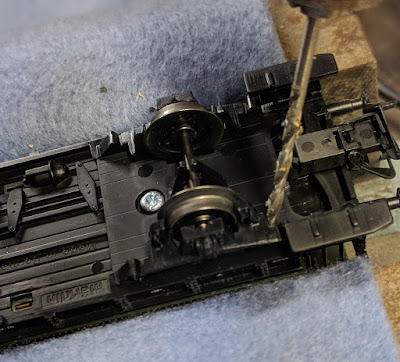 Once the 4 holes were drilled I opened the coach up and removed all drilling remnants. 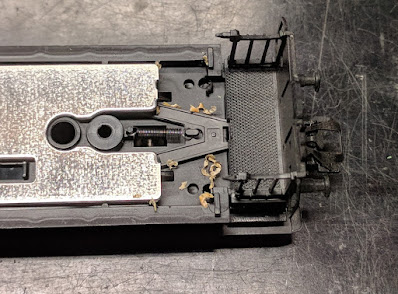 Initially I ran the wires out of one coach and ran them parallel to each other into the next like this: 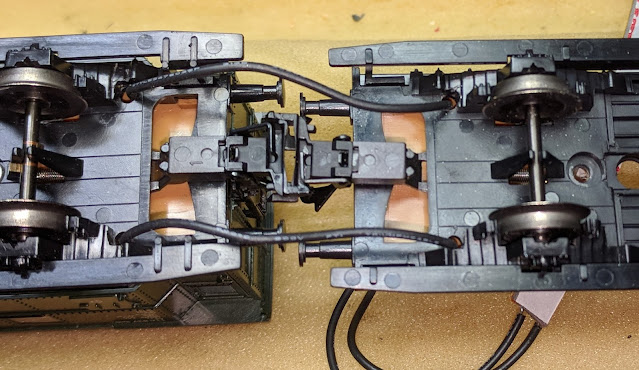 I soon found however that the wires can hang too low so I realised I needed to run them up and over the coupling like this: 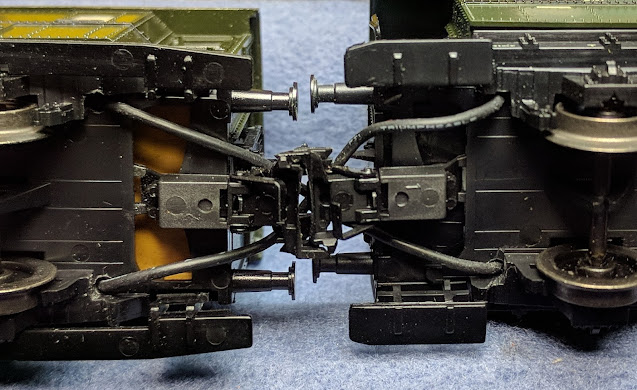 I then decided that since I was permanently coupling the train together, I may as well use permanent couplers. Having just recently got a 3D printer working, I designed and printed some couplers and replaced each pair of close couplers with my ones. 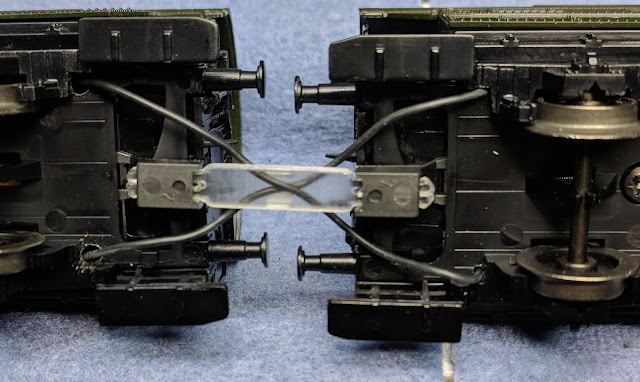 (At the time I did not have any black resin so I used clear resin instead.)
I was using 30 AWG wires that are very flexible but were rather thicker than they need be. Here you can see how the wires have to come up through the end seats. 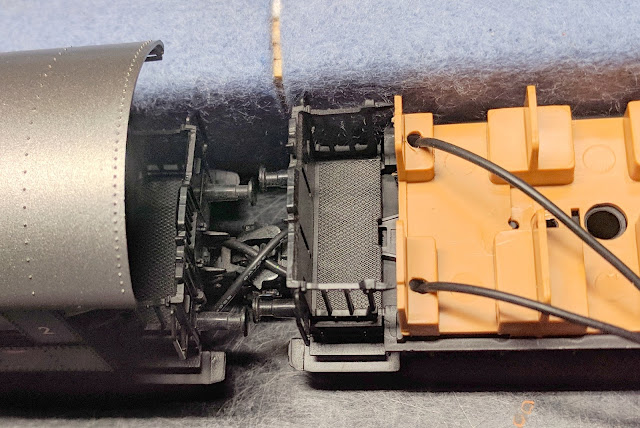 I glued in some cheap, seated passengers, and simply soldered the wires onto 10cm of strip.The brass weight held the strip while I soldered onto it. 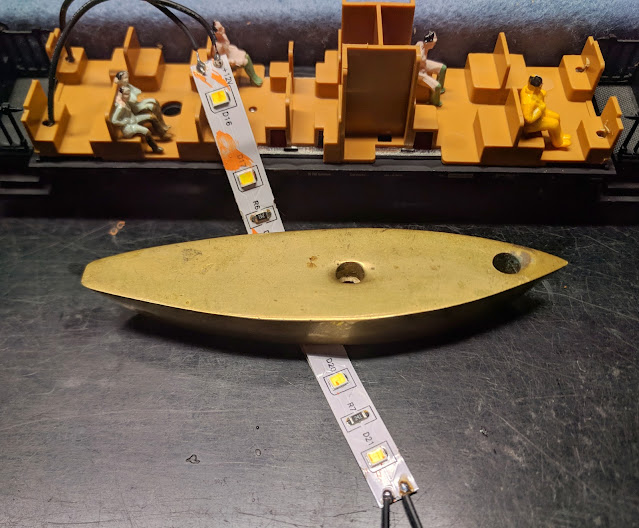 Since both wires are black and I had to keep track of which was positive, I ensured that I always stripped the end of the positive lead. Only once it was soldered to the positive side of the next LED strip did I strip the negative wire. 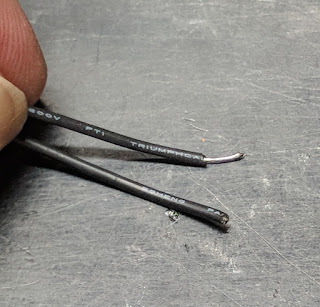 On the underside of the roof of each coach is a sprue from the manufacturing process which I cut off so that the LED strip could be mounted through the middle of the car. 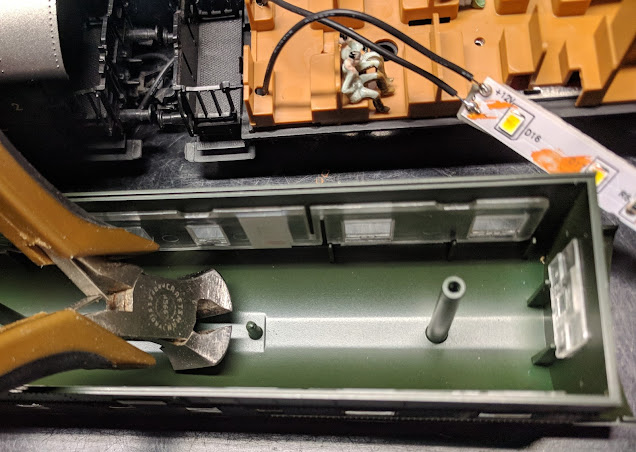 Since the peel off backing of the LED strips are completely unreliable, I attached the LED strips to the rooves using 3M VHB double sided tape. The columns used for fastening the shell onto the chassis are less than 10cm apart so the LED strips had to be placed diagonally. 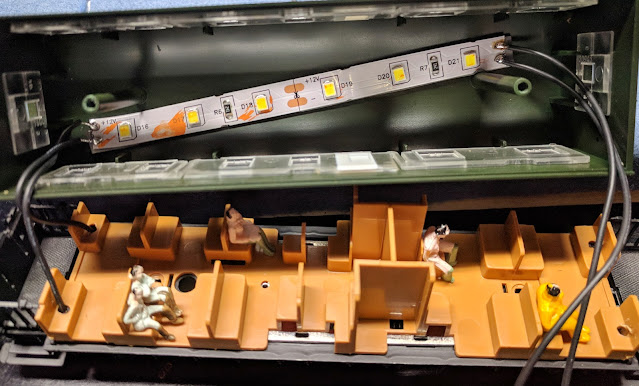 Once the whole train was done and placed back on the layout, I was able to set the brightness of the lights using the adjuster on the DC-DC converter. 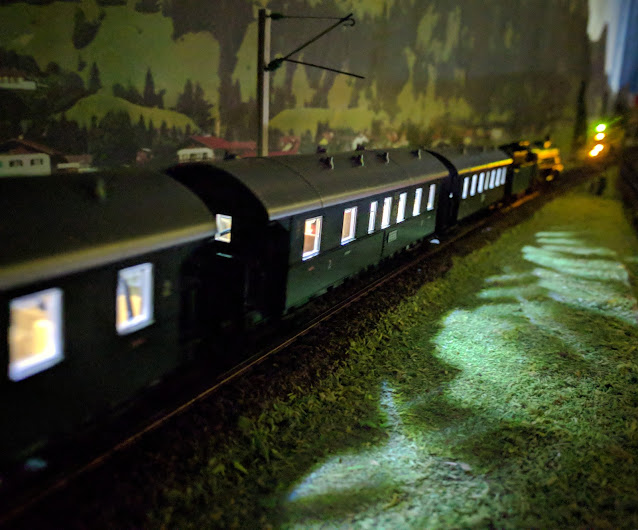 The capacitor keeps the train illuminated for a couple of seconds after losing power. It is certainly adequate for momentary power interruptions. The DC-DC converter keeps them at a constant brightness. I will also try a train that uses a resistor instead of the DC-DC converter to see if a slow dimming is preferable. 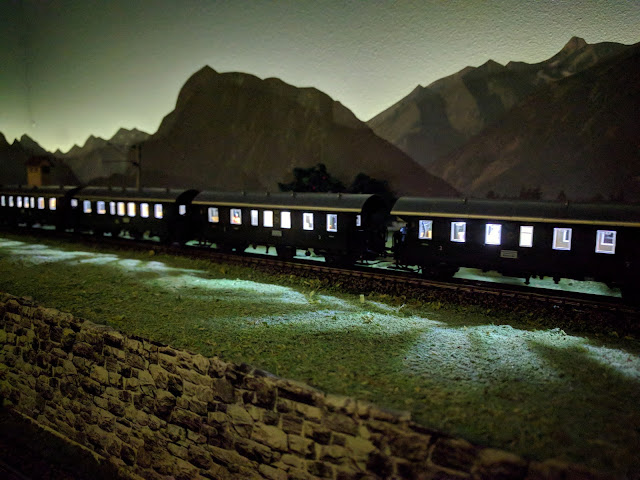