Nine years ago I wrote an app for my Hewlett-Packard Pocket-PC that communicated with my train layout control software and could thus be used as a wireless mobile controller for the layout. It worked fine, but with time, the HP device is no longer current, can't hold its charge and is not really useful. I thus decided to replace the app with a plain browser-based solution. This would mean that any browser based device could be used, meaning that any modern smart phone could be used. Visitors to my layout can use their own device to operate trains!

This means that I essentially had to add an HTTP server to my software, and generate the HTML pages dynamically. It took a couple of weekends and I am very pleased with the results.

The main functional features are:

1. Switching the layout power.
Power can be switched on, off, or the 'halt mode' can be set on. These controls are available at the top of every screen (including the '404 not found page!).
This ensures that the power can always be switched off in case of emergency, such as a derailment.

2. Cab type control of a train.
This is the most complex of all the screens. Selecting any train that is on the layout will display the following items:

Then, for each locomotive that is in the train:

- Loco name and digital address,
- An animated actual odometer that rolls according to the current speed of the train,
- A checkbox to switch each loco function on or off,


The loco page refreshes every 3 seconds so that as a train moves along its route, one can see the track, signals, speed, etc. in real time.

Here is a sample screen 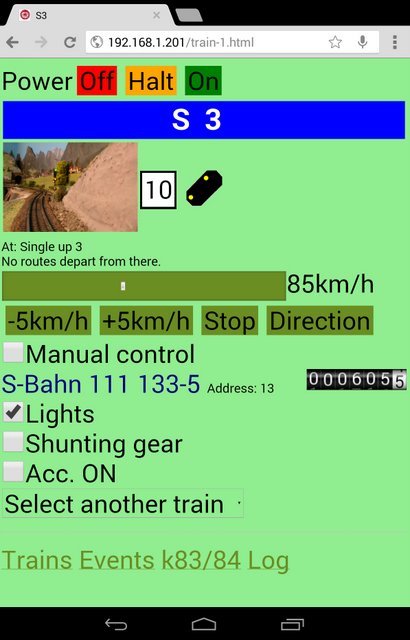 Update:
The signals are now positioned precisely in the images of the tracks. Here is an example taken from the Underground S-Bahn station: 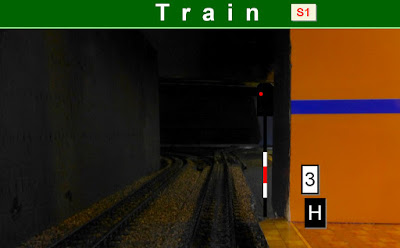 and a video of running a train from the screen:

(I had not yet taken the photographs along the route when this video was made.)

I intend making the following improvements to the individual train page:

a) Fetch updated data in the background instead of refreshing the whole page.
b) Show the desired speed of the train, and train speed limit, in addition to the current speed.
c) Make the train speed display match that of the prototype

Here is a video of the events screen:


4. Direct switching of electromagnetic items.
This is mostly a troubleshooting tool. If a turnout is sticking or not reacting is it very useful to be able to activate it from wherever the turnout is on the layout so one can see or feel the mechanism.

Rather boring, just a copy of whatever is on the system log.

© User Interface design and software is copyright  by Dale Schultz (2014) except for the odometer which is by Mark Crossley.