After 6 years, I decided to upgrade my layout room lighting so that I could also control it from the layout software.

I wanted to be able to dim the room lighting automatically so that sunrise and sunset sequences could be done smoothly. Until now I had to manually adjust the dimmers of three lighting circuits which was somewhat tricky.

Purchasing digitally controlled lighting would have been prohibitively expensive and furthermore I was not prepared to remove the existing LED strips from the ceiling above the layout. I decided to implement digital access to the lighting by adding electronics where the existing lights obtained their power and were controlled by the dimmers.

I have four circuits:


I decided to use an ESP8266 NodeMCU processor to control the lights. This is a small processor about 1" x 2" in size and can be bought for less than $5. It is capable of connecting to WiFi and has a number of outputs that can be used for the lighting, but these outputs are only 3.3V and only capable of 12mA, so those logical level outputs had to be fed to some components that amplify the signals and drive the high current load of all the lights.

I also found some technology called Blynk which includes the ability to easily create an app that runs on mobile devices and can 'talk' to the ESP8266, thus providing a handy visual interface to control the lights. Here is what my Blynk app for the lights looks like: 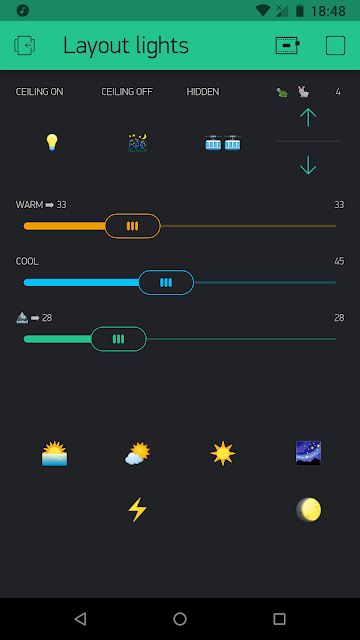 Blynk also has a handy restful HTTP API - that means it is very easy to link a voice command to the Google Assistant to trigger virtual pins - So I can command my lightning effect by saying "OK Google, Blitzen", or "Turn ceiling lights on", etc.

Since the layout lights also have a main switch that energizes the 12V 30A power supply it uses, I made the ESP8266 switch on one set of lights right away when it starts up. This ensures that when I switch the lights on I get light right away. Once it has connected to WiFi (which can take a few seconds) it also turns on the other set of ceiling lights.

There is also a small switch that will toggle the hidden area lights on or off, removing any need to have the phone app or external computer software running.

So much for the software side, the tricky part for me was getting the electronics right. I had to learn a lot about MOSFETs, MOSFET drivers and how seemingly simple circuits are not so simple in a radio frequency electrical environment that comes with the pulse width dimming (PWD) of lots of power.

I ordered some FQP30N06LE MOSFETs and connected up a test circuit. It worked, but only sort of. It would drive an LED, but when I connected up a reel of LED lights (5m long) I could only get 7 Volts out of the MOSFET. It turns out that yes the components I ordered could switch very small currents at 3.3V but to do anything useful, I would need to add a MOSFET driver chip to apply a bigger voltage to the gate of the MOSFET. I ordered some TC4427 chips and some little capacitors that they need and connected them up as follows: 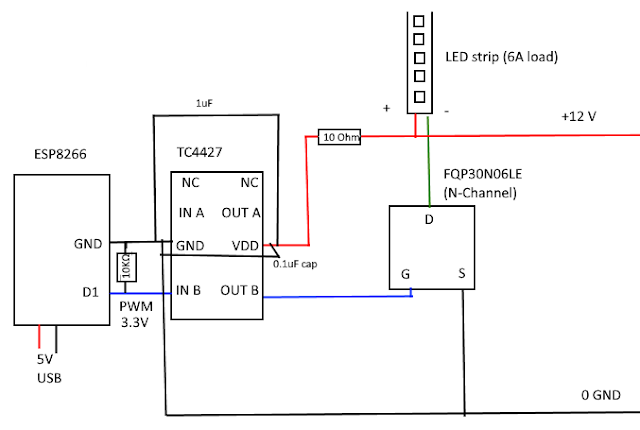 which, when connected up on a breadboard, looked like this: 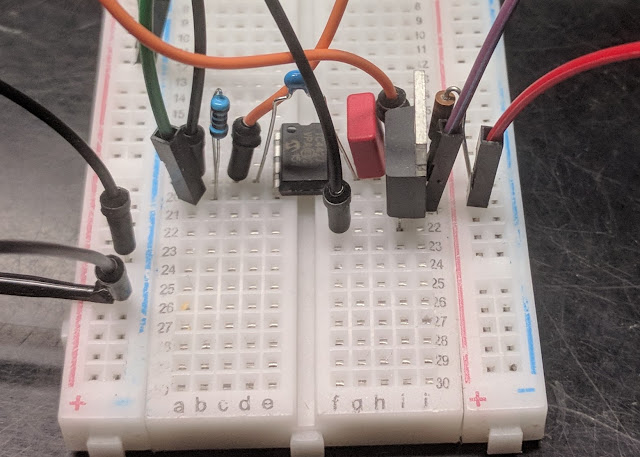 That setup worked perfectly. I could now set any circuit to any brightness and the whole LED strip would respond as designed. All I had to do then was make four such circuits and solder them all together.

Since the MOSFETs have to drive a fairly large current (up to 5 Amps) I decided to place some heat sinks on them to dissipate heat. The current that is supplied to each of these MOSFETs is the negative side of the 12V and they switch that current to what is called the drain pin. The wires carrying those large currents were soldered directly to the pins and do not rely on the traces of the solderable breadboard I used for the other wiring. They are the large white wires visible below. 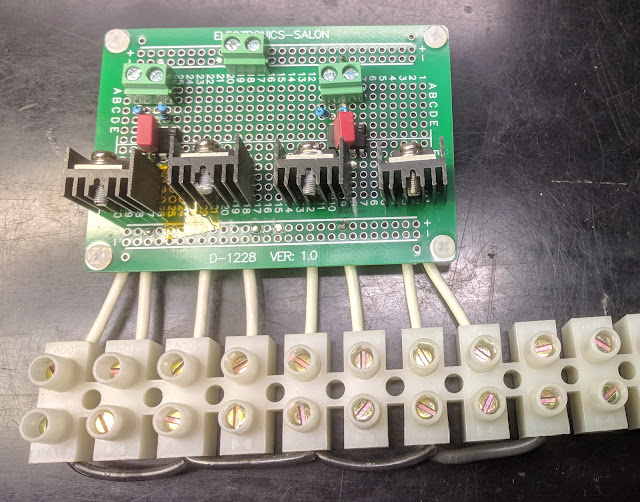 Since the heat sinks have a pin that goes into the same trace as the drain pin I decided not to attempt to electrically insulate the heat sink from each MOSFET. When soldering them in place I used some cardboard as a spacer to keep the heat sinks off the circuit board. 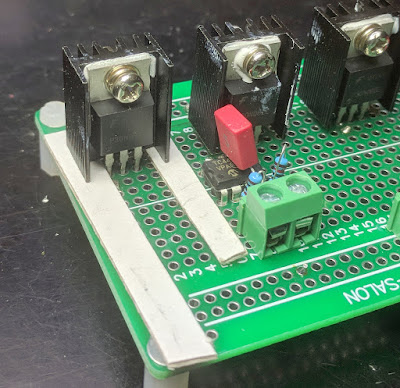 The screw terminal in the foreground was for two of the input signals, I decided later to wire a ribbon cable to the board directly and so I removed the screw terminals. 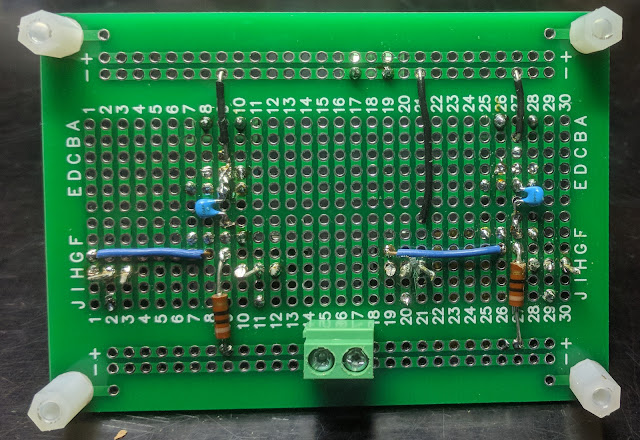 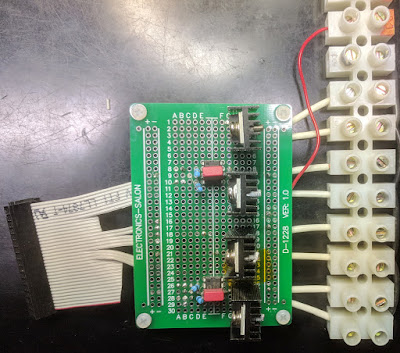 Once everything was connected up, I found the ESP8266 would not get onto the network. Since some pins are sensitive to being loaded when these things boot up I did some tests and decided that one pin I was using was preventing it from booting so I used a different pin. Satisfied that all was OK, I then ripped out the old dimmers and installed the new electronics under the layout.

Once all in place, it would no longer get onto the wifi network again! I pulled the ESP out and experimented with it upstairs. I substituted another device and that one worked fine so I decided that the different brands just work differently.

I was able to easily add the networked device to my layout software as a RemoteSign client and add the commands to dim the lights for my sunset and sunrise routines. I added the lightning event to my thunderstorm too, and it is much improved over the old flashing Hue light.

I tested the start up process and it all worked as designed. Next day, it would not get onto the network again.... it seems that the problem I ran into after assembling, and after the initial installation is the same one that is simply erratic, and switching pins and the device never solved the problem. If I power up the ESP8266 after the 12V power supply it seems to work. I intend installing a buck converter to power the ESP8266 with 5V converted form the 12V so perhaps that may solve the problem if it is power related. I will update here when I get to the bottom of that issue.

Update 2019-01-19
I placed a metal barrier between the 12V power supply and the ESP8266 and it seems to improve its ability to join the network, so I suspect some RF interference, but net yet sure. Buck converters arrive today.

The heat sinks do not get hot at all, I ran all the lights at full brightness for about 30 minutes and they were just above room temperature.

I really like the nice transitions that it achieves... 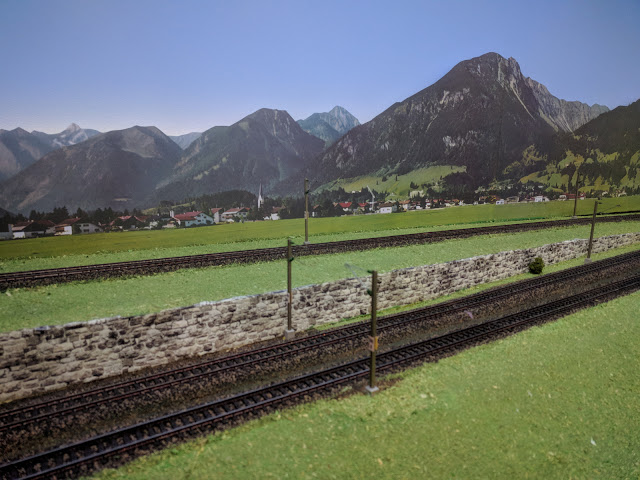 Video
I have put together a video of some of the effects:


Here is what I used:


I would like to thank the numerous people on the various fora that helped with my noob questions at various steps along the way, and Debbie for putting up with the excitement of working milestones!


For a handfull of dollars, it is possible to create a very flexible system for lighting. The lighting can be controlled in multiple ways: