I have an area in the corner of the layout that represents a terraced vineyard, and for years it has been an ugly chunk of polystyrene, painted brown. I got around to adding the stone walls, vegetation and the vines. 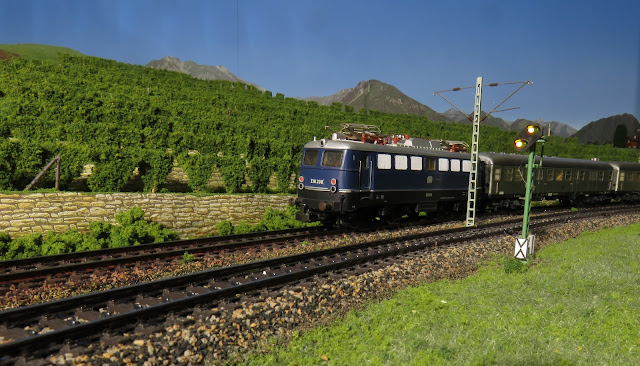 Here are the steps I used to create the vineyard.

As usual, it started with a plywood base as a foundation 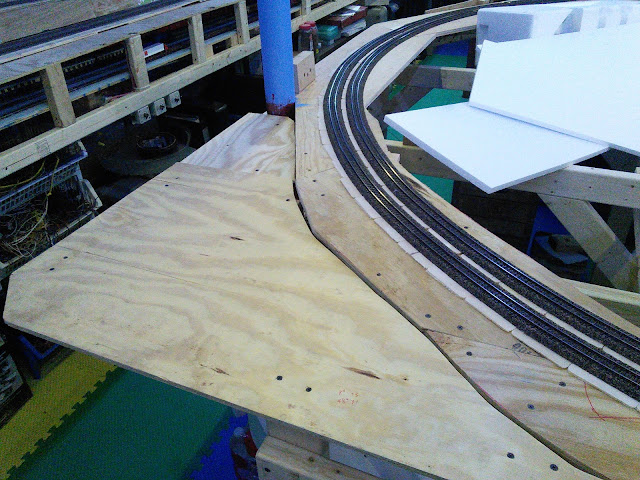 On top of that I added layers of Styrofoam, cut so that it made a set of terraces. I cut the 'walls' at a slight angle so they are not 100% vertical. 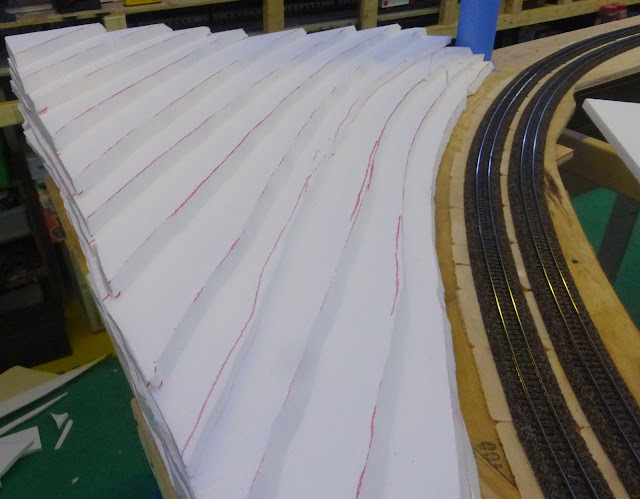 I wanted to make some stairs between the levels and had some Faller steps left over from building an escalator. They were very uniform so I cut some grooves in them to make them look as if they were made form stone, and then painted them. From left to right, virgin steps to completed steps. 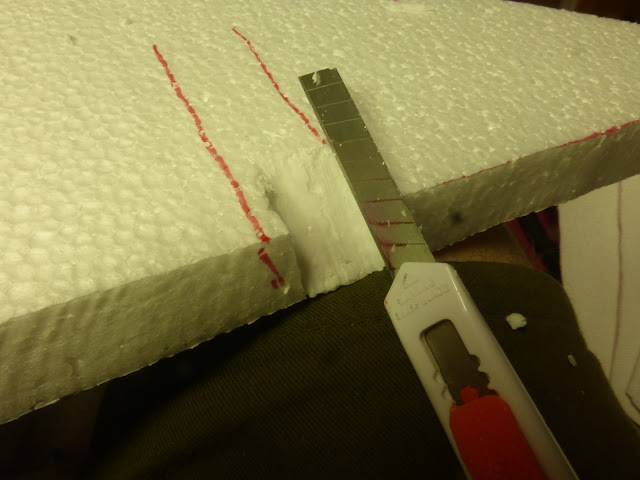 just wide enough for the steps to fit in. 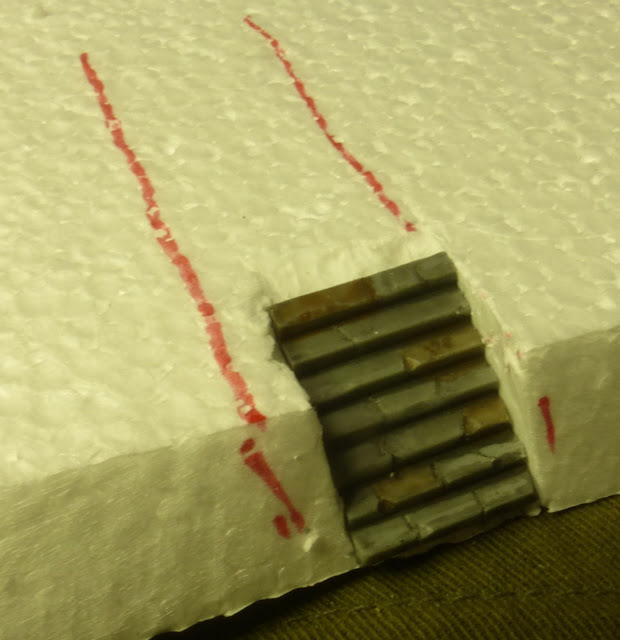 Once I was happy with the shapes, I glued them all together with wood glue. 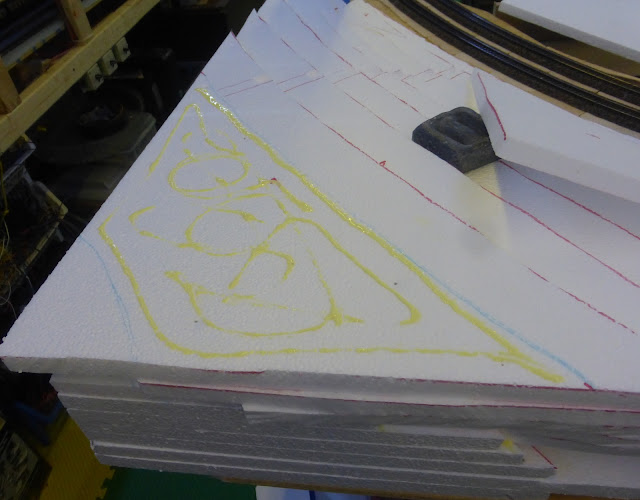 I added some plywood to the side of the layout and filled in little gaps with plaster. I painted the whole hill with cheap brown poster paint and let it dry for almost 4 years. 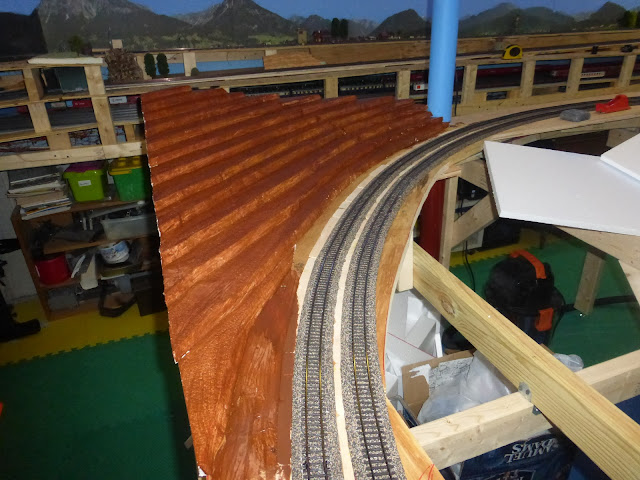 While that was drying, I built the lake on the other side of the tracks 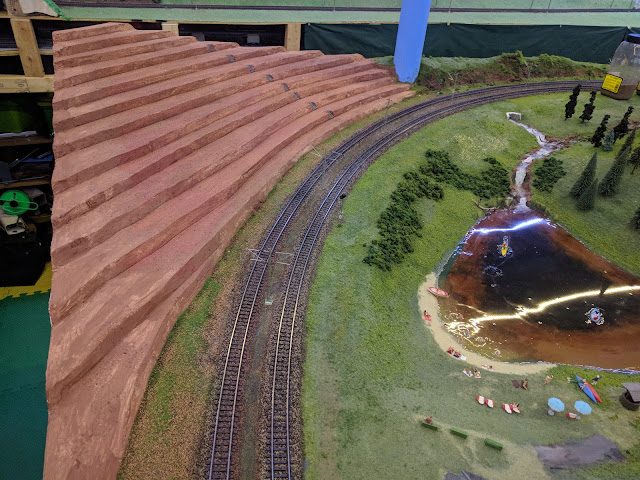 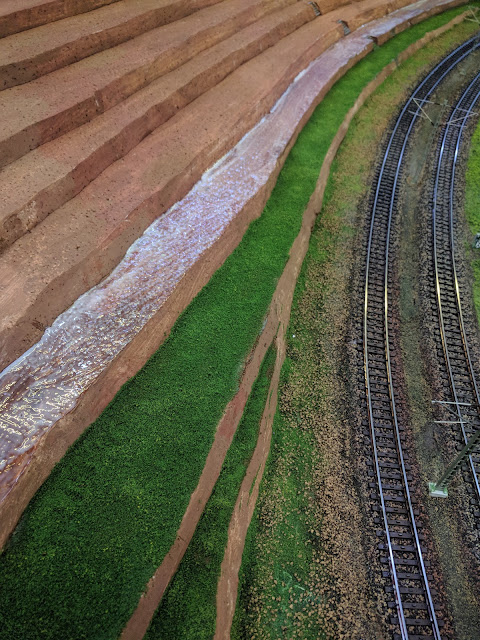 as well as some static grass (without using the applicator, just sprinkled it on). 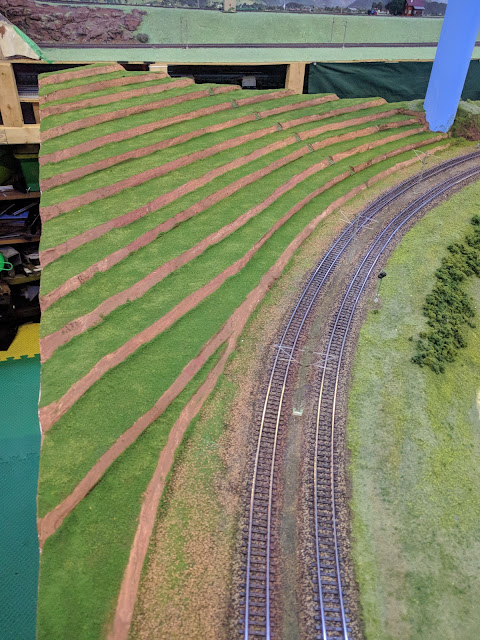 Then it was time to add the walls which were printed on paper and cut into strips just higher than the walls. I glued them on with white glue. 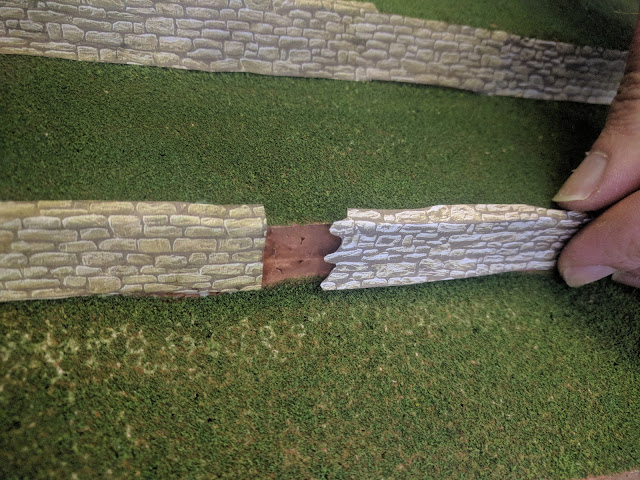 The edges of the walls were grassed over. (It probably would have been better to do the walls first.) 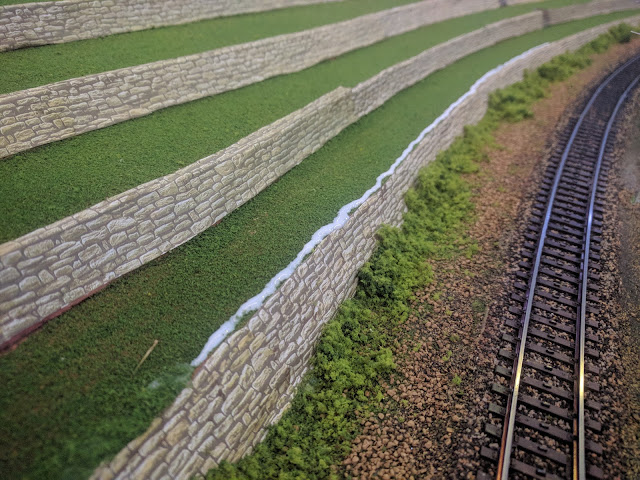 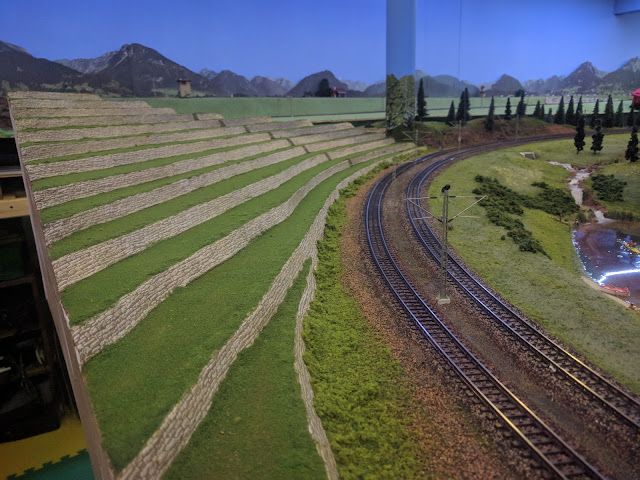 I added a bit of coarse turf and very small weeds at the base of the walls. 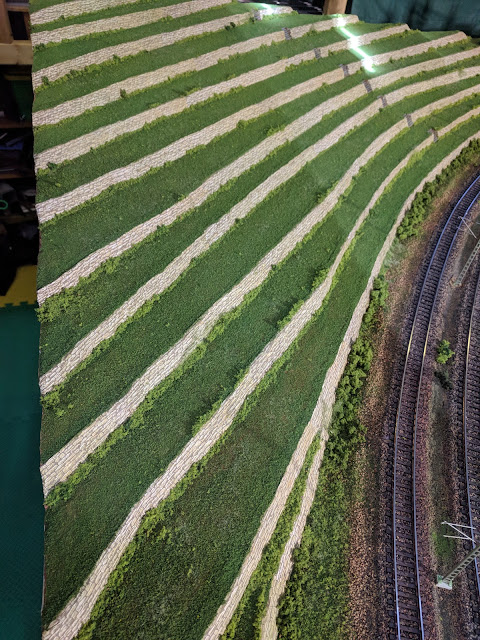 I made the grape vines as described here. Planting them in rows was pretty easy, I dipped each one into some glue and simply pushed it into the Styrofoam, ensuring that the tops are the same height and that each one touches the previous one. At the ends of some rows, I had to drill the hole where a vine had to go through the plaster I had used to fill in gaps. 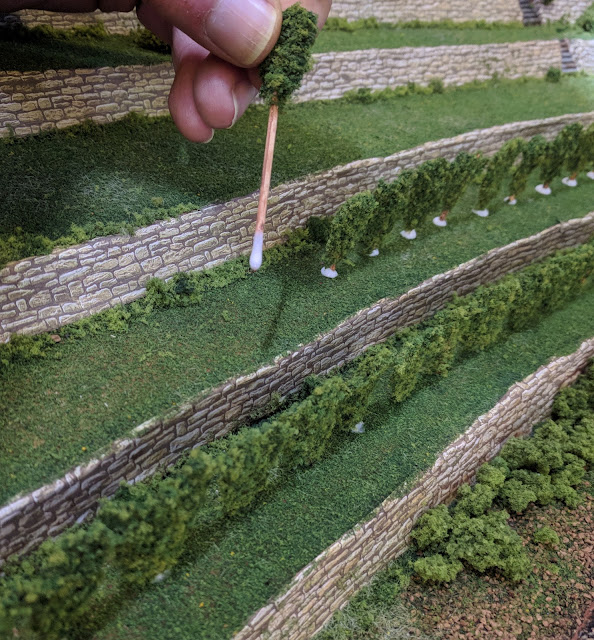 The white blobs of glue at each base, soak in and disappears before it dries.

Some terraces are wide enough for two rows, some just one row... 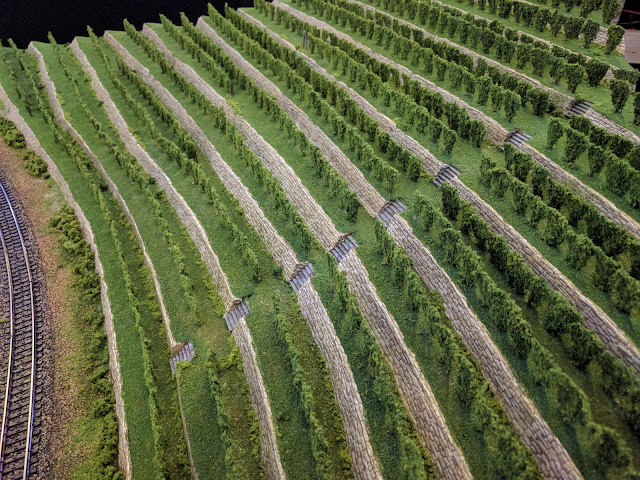 There are about 648 vines in this corner! 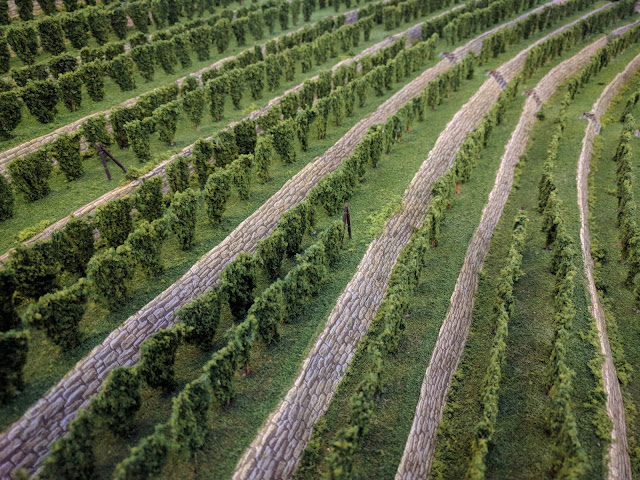 The bathers hardly pay any attention to the E10 rolling past in the background. 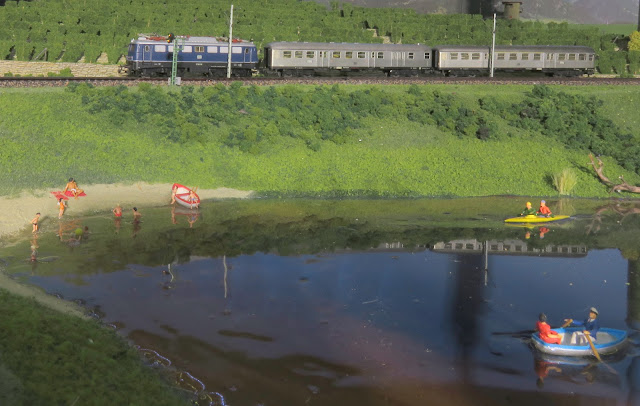 The grape harvesting can be seen here