As with any hobby, model train layout building has many possible 'mistakes' or things that are done that turn out not to work very well, either visually or functionally.

I thought I would create a list of things one often sees, that I would advise against doing unless you have considered it very carefully. Clearly this is a matter of personal taste, so if you have done, or plan on doing some of these, don't let me stop you, it is your layout, and you do what you like. 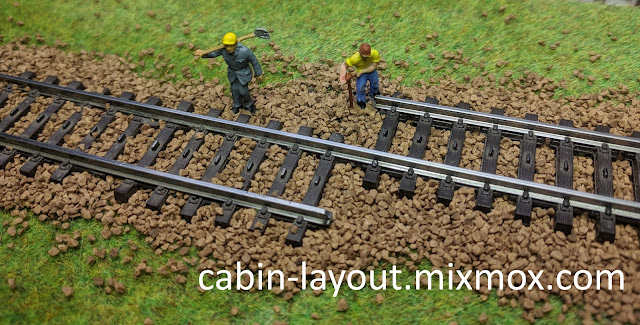 The items I list here are aligned with my layout building philosophy and aims - building a realistic landscape with items to keep viewers engaged and interested. Realism is achieved when things look normal, things you would see on a normal day. As a result many of the items make sense just from an observational point of view... i.e. if you simply look at how things are in real life, you will make better landscapes and scenes.

Many of the issues that come up are because of the limited space we have available. We have to try and compress a lot into a relatively small space, and this amplifies the issues. This makes it all the more important to avoid doing things that work against what many of us are trying to do - creating a realistic looking layout.

Often it is better do forgo adding something, simply because we do not have the space to do it properly. Just as we don't all have space for a scale sized airport, some of us don't have space for a station either, and that is fine. I have seen a very pleasing layout that does not feature a station at all. There is simply no room, and the layout looks better as a result of not trying to fit one in where it would not work.

Real lakes, ponds and rivers are generally not blue.

Resist the temptation to make the underside of your water body blue, or even green. They are brown. Now, lakes often look blue, but that is because they reflect the blue sky. If you want to achieve that, paint the bottom of the lake brown (and even black where it is deeper), and paint your ceiling blue, and the lake will reflect it correctly!
See Making a lake
(Meltwater from glaciers can be somewhat blue but this is rare)

No, real water does not look good!

Many are tempted to use real water on their layout, in fountains, watermills and even lakes. It is not an original idea. I think it is crazy for a number of reasons:


Water, waterfalls, and splashes can be modelled without it moving.

I know it hard to find space for a field, and if you have a box of cows... resist the temptation to put them in a pen too small for a dog! They won't look like cows at all. Rather have a farmer herding them along a road, or create a field that looks like it runs off into the background.

If you have found a space for a flock of sheep or herd of cows, don't spread them out over the whole area available. Clump them into little groups, especially sheep. Watch out for putting animals on a slope when they are posed for horizontal ground.

Trees and bushes stick together too.

Grass patches do not usually grow to a height of 52cm

Static grass is all the rage and it can look excellent, but watch out for using 6mm long fibers that produce 52cm high grass!

Train tracks are as straight as possible.

It is a fact that when modelling, if we are to have almost any running at all, we end up having to have curves. Long wagons such as passenger coaches amplify and pronounce curves as they travel through them. I try to minimize curves as much as possible by following these principles:

Trains are not supersonic

This is more of an operational item than landscape design, but even then, since we are typically forced to have some curves, keep the train speeds down. Steam trains often travel at around 50 - 60 km/h. 50km/h in HO scale is the same as 9.5m of track per minute or 16cm per second, which looks like a bullet train. Now, remember that due to space limitations, everything on the model layout is waaaay shorter than in real life, perhaps by a factor of 4, so 4cm/s is more realistic.

Watch out for hovering buildings!

Buildings need to be anchored to the ground, not just plonked down on the layout such that their lower edge is a few mm off the ground. A 3mm gap equates to a 26cm space, and buildings hovering that high off the ground just scream that something is wrong. An easy fix is to add some plaster to bring the ground up to the house, then add vegetation.

Watch out for verticals and horizontals

Make sure the buildings are horizontal, and poles are vertical. The human eye can pick out small discrepancies very easily, and modelling is all about trying to fool the eyes and brain into believing it all looks real, so don't give the game away by providing clues that things are skew. The eyes and brain start to question things right way.

Lighting placed on the floor 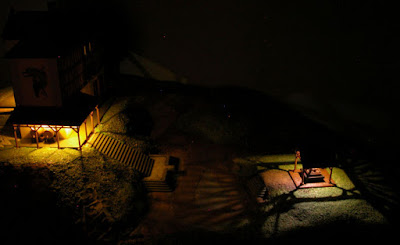 Some building kits come with black masks to prevent internal light from leaking out through the walls and roof. Use them. Better still, augment them, since perforations along the corners still allow light to leak through and make the house glow like something out of Chernobyl.


Tracks that curve at a tunnel mouth

It is hard to get enough space to turn trains so we all try to turn the trains as soon as they enter tunnels, but this is a trap! The front end of the coaches start turning while the back end is still visible! Try to have straight track for at least one long-coach length before the curve inside the tunnel starts.

If one has AC power available for powering lighting, it is tempting to simply use a diode and a resistor to make up the circuit to power LED lights. It may look fine to the eye, but here is the trap...
At some stage you will want to make a video, and the video camera frame rate and the flickering of the LED lights will interfere with each other, and produce rapidly blinking lights in the video, that are very distracting. Either, create a fully rectified circuit, or use a DC power supply to feed true DC power to your LED lights.

Overhead power wires are not curved

Power cables supported by catenary over electrified tracks goes in straight lines, even through curved track. If you opt for erecting catenary and power lines, use enough poles on curves to allow the power lines to stay over the track in straight segments (chords). Avoid the temptation to bend the overhead wires into a curve!

This is a very common mistake in my book, and it spoils the illusion of reality very fast. Usually these are things that people have never actually seen, which underscores the instant loss of any sense of reality. Here are common examples that many people add to their layout:
Essentially, if you saw something in real life unusual enough for you to tell people about it, it probably should not be on a layout that is striving for realism.

Try something new. We have all seen the emergency scenes. There are plenty of interesting scenes one sees in everyday life, such as road construction, people cycling, walking about, market day, and so on, that add to the realism of the layout rather than reducing realism.

One can't see fishing line. Trying to add scale fishing line to a person fishing produces a ridiculous scene of the person fishing with a thick cable that they could probably not even carry. Just leave the line out, and our brains will add it into the scene. Even telephone wires and overhead catenary tends to be too big and tends to clutter a scene.

Including items that are way out of scale

Matchbox cars are not the right scale and they look weird on an HO layout. Watch out for plastic animals that are too big too.

Sound can be very easily overdone. For some reason, locomotive sounds are generally way too loud. They sound great for the first 5 minutes but they rapidly get tiresome and having two or three sound locos going at the same time is awful. Again, model what we see in reality, imagine being 100m away from a steam locomotive, would you be able to hear the fireman shoveling coal? No. Would you hear the a steam whistle or the rumble of a Diesel engine, sure. Now imagine being 1km away! Turn them down so you can hear them only when you come in really close!

A very common mistake is to cram the layout so full of stuff that it no longer resembles real life at all. (This is somewhat similar to the cows in a tiny pen item above.) Yes, villages and towns often have things packed in, and one sees every square foot of land in suburban area being used, but it is very easy to put too much stuff on the layout. Allow some open space.

Where does the water go?

In real life, a major design issue for most structures, is where will water drain to. Things are sloped so water can run off. Train lines have drainage built into the track area. If you think about where the rainwater will go on your layout, you will immediately start making things emulate the real world better. It should go without saying that water runs downhill, yet one sees streams that 'run' along the sides of mountains as if there was some magical force holding the water back. You see ponds with a berm around them and no way for water to drain into the pond. You have to cut into the benchwork to make the pond lower than the surrounding landscape, not just the 2m radius around the edge.
See Making a pond

Where does all that water come from?

Avoid having huge rivers that come out of nowhere. Springs are tiny places where water just trickles from the ground, they do not produce torrents of water from behind a farmhouse. It is very tricky to build up a water system from a small stream big enough to have a waterfall. One way is to have the water flow in from somewhere off-stage - i.e. coming into the layout from somewhere else. So long as you can explain where the water is coming from - it will work.

Using bird seed, and other edible items usually results in mice or insects eating and destroying whatever you made with them.

The sides of train tracks are neither bright silver nor bright rust orange. They are black with a hint of rust color.

Well that all sounds like a lot of criticism, but really it is all one concept: Look at real life and model what you see, not what you imagine. If you keep that simple concept in mind you will be better positioned to making realistic looking layouts, and it can be applied from the initial design stage through to adding individual flowers...